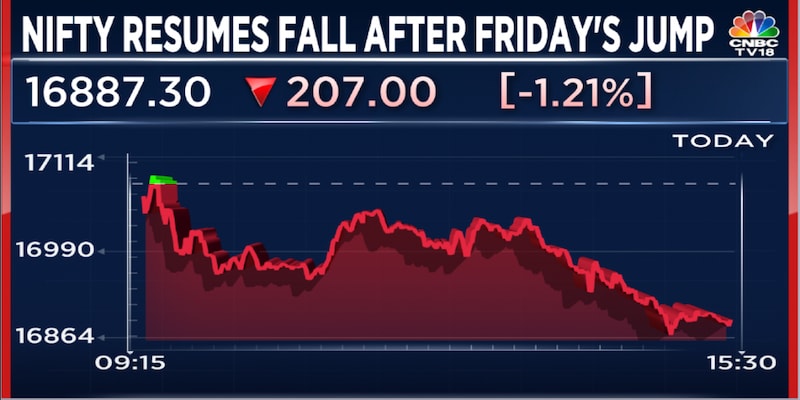 Trade setup for Tuesday, October 4: The Nifty50 continues to be in a short-term negative trend, say experts. Here's what the technical charts suggest.

Indian equity benchmarks began a holiday-truncated week sharply lower on Monday, continuing to fall following a jump of nearly two percent the previous day after the RBI announced a widely-expected rate hike in the key lending rate. Financial, FMCG and metal shares were the biggest drags on both Sensex and Nifty50.
Globally, investors remained on the back foot on fears that aggressive rate hikes will hamper economic growth.
What do the charts suggest for Dalal Street?
The Nifty50 has formed a long bear candle on the daily chart, engulfing more than half of the previous bull candle and suggesting lack of strength to sustain the bounce, according to Nagaraj Shetti, Technical Research Analyst at HDFC Securities.
One can expect the 50-scrip gauge to test crucial support in the 16,750-16,800 zone in the near term, he said.
Nifty Bank in a bearish mode
The Nifty Bank appears to be in a bearish mode for traders, independent technical advisor Manish Shah pointed out.
He expects the banking index to slide towards 37,050-37,000 over the next couple of days. "Major resistance is at 38,900. For any more upside, the Nifty Bank has take out 36,900," Shah added.
ALSO READ: What the Street makes of RBI rate hike and warning
Here are key things to know about the market ahead of the October 4 session:
SGX Nifty
On Tuesday, Singapore Exchange (SGX) Nifty futures — an early indicator of the Nifty index — jumped as much as 252 points or 1.5 percent to 17,120.5 ahead of the opening bell on Dalal Street.
Global markets
Equities in other Asian regions rose amid thin trade, following a surge in Wall Street indices overnight, as the China and Hong Kong markets were shut for holidays. MSCI's broadest index of Asia Pacific shares outside Japan was up 0.8 percent at the last count. Japan's Nikkei 225 was up 2.3 percent.
S&P 500 futures were up 0.4 percent. On Monday, the S&P 500 finished 2.6 percent higher, the Dow Jones jumped 2.7 percent and the Nasdaq Composite 2.27 percent as US Treasury yields tumbled on weaker-than-expected manufacturing data.
What to expect on Dalal Street?
HDFC Securities' Shetti believes that a decisive slide below 17,750 is likely to negate the bullish pattern created on Friday, which could eventually result in further strengthening of downside momentum.
The short-term trend of the Nifty remains weak, with next important support being at 16,750, he said. "Any sustainable move below 16,750 could bring sharp negative momentum in the market. On the upside, levels of 17,060-17,100 could act as a strong hurdle."
Key moving averages
The Nifty50 slipped below its 10-, 20- and 50-day simple moving averages on Monday. It stands 3.7 percent below the 200-day mark, in a bearish signal.
FII/DII activity
Foreign institutional investors (FIIs) returned to buying of Indian shares on Monday after eight back-to-back sessions of selling, according to provisional exchange data. 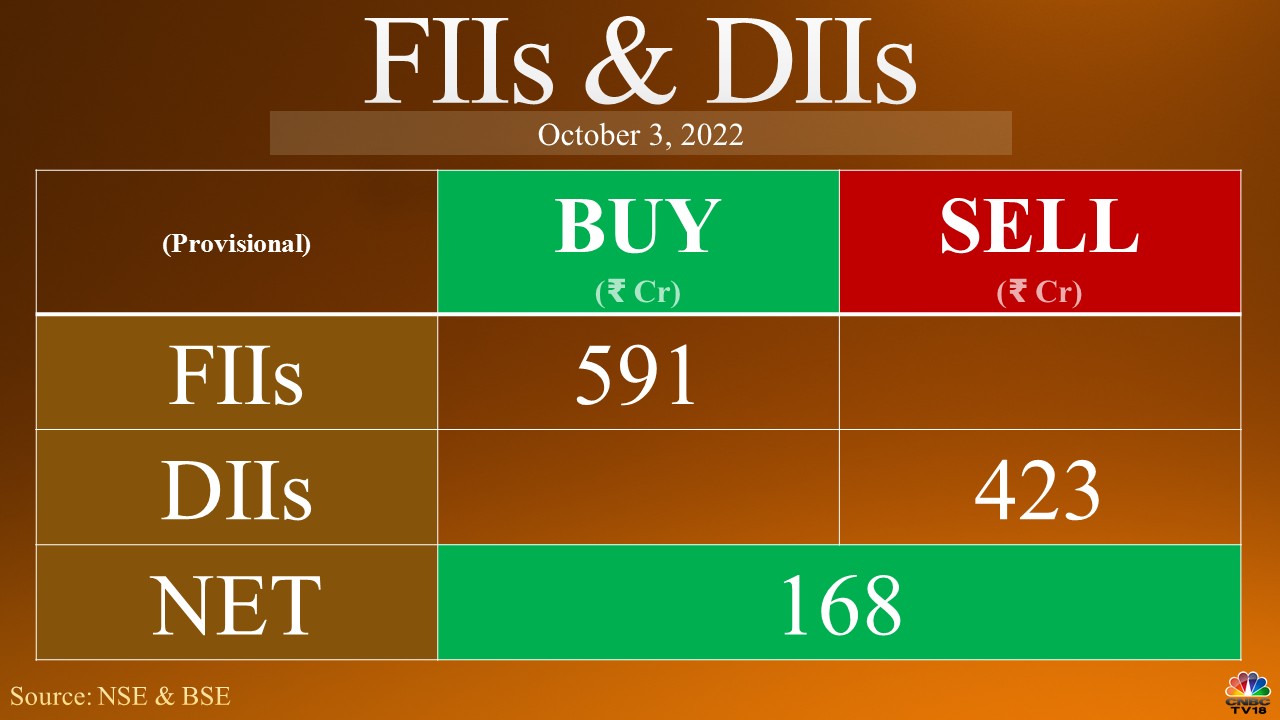 ALSO READ: 'Chakravyuh' moment in Indian market
Call/put open interest
The maximum call open interest is accumulated at the strike price of 17,000, with 1.6 lakh contracts, and the next highest at 17,100 and 17,500, 1.4 lakh each, according to exchange data. On the other hand, the maximum put open interest is at 16,000, with more than one lakh contracts, and at 16,800, with nearly 78,000 contracts.
This indicates a tough hurdle at the 17,000 mark, and immediate support at 16,800 followed by a strong base at 16,000.
Long build-up
Here are five stocks that saw an increase in open interest as well as price:
Long unwinding
(Increase in price and decrease in open interest)
Short covering
(Increase in price and decrease in open interest)
Short build-up
(Decrease in price and increase in open interest)
52-week highs
As many as 14 stocks in the BSE 500 universe — the broadest index on the bourse — touched the milestone on Monday, including Bharti Airtel, Cipla, Sun Pharma and Eicher Motors.
52-week lows
On the other hand, three stocks in the 500-scrip pack hit 52-week lows: Johnson Controls-Hitachi AC, OFSS and Sona BLW Precision.
Check out our in-depth Market Coverage, Business News & get real-time Stock Market Updates on CNBC-TV18. Also, Watch our channels CNBC-TV18, CNBC Awaaz and CNBC Bajar Live on-the-go!