Trade setup for Oct 12: As Nifty gives up key support at 17,000, more downside likely on D-Street

Trade setup for Oct 12: As Nifty gives up key support at 17,000, more downside likely on D-Street Trade setup for Wednesday, October 12: The correction wave in Nifty50 may extend all the way to 16,850-16,800 levels, say experts. Here's what the technical charts suggest.

Indian equity benchmarks fell for a third straight day on Tuesday amid weakness across global peers, as investors weighed steep rate hikes against the possibility of a recession and concerns persisted about rising geopolitical tensions in Europe.
All sectors succumbed to selling pressure on Dalal Street, with IT shares being among major laggards even as TCS kicked off the earnings season on a strong note.
What do the charts suggest for Dalal Street?
The Nifty50 has formed a long bearish candle on the daily chart, suggesting further weakness up ahead, according to Shrikant Chouhan, Head of Equity Research (Retail) at Kotak Securities.
Having breached important support at 17,150, the Nifty50's correction wave may continue all the way to 16,850-16,800 levels, he said. "On the flipside, key intraday resistance will be at 17,050, above which, a minor pullback rally is possible till 17,100-17,125."
Nifty Bank fails to take out a key hurdle
The Nifty Bank faces strong resistance at 39,500, where aggressive call writing exists, and a slide below 38,000 on a closing basis may lead to more downside, said Kunal Shah, Senior Technical & Derivative Analyst at LKP Securities.
Here are key things to know about the market ahead of the October 12 session:
SGX Nifty
Early on Wednesday, Singapore Exchange (SGX) Nifty futures — an early indicator of the Nifty index — rose as much as 75.5 points or 0.4 percent to 17,015.5 ahead of the opening bell on Dalal Street.
Global markets
Equities in other parts of Asia continued to reel under pressure, following a weak handover from Wall Street overnight, as investors fretted over hawkish central banks and geopolitical tensions in Europe. MSCI's broadest index of Asia Pacific shares outside Japan was down one percent at the last count. Japan's Nikkei 225 was down 0.1 percent, China's Shanghai Composite 1.1 percent and Hong Kong's Hang Seng 2.2 percent.
S&P 500 futures eked out a gain of 0.1 percent. On Tuesday, the S&P 500, the Dow Jones and the Nasdaq Composite finished one percent lower each after signals from the BoE that it would support the country's bond market for only three more days, adding to market jitters.
What to expect on Dalal Street?
The Nifty50 may test a swing low, near 16,750, where buying support may come in(16,750-16,800), said Gaurav Ratnaparkhi, Head of Technical Research at Sharekhan by BNP Paribas.
He expects the 17,250-17,300 zone to continue to play the role of resistance in the short term.
LKP's Shah expects the banking index to move within a range of 38,000-39,500 as investosr globally await crucial data.
Key moving averages
Tuesday's fall sent the Nifty50 almost three percent below its long-term moving average, from 1.5 percent the previous day.
Key levels to watch out for
The maximum call open interest is accumulated at the strike price of 17,200, with 1.9 lakh contracts, and the next highest at 18,000, with 1.8 lakh contracts, according to provisional exchange data. The maximum put open interest is placed at 17,000, with 1.1 lakh contracts, and at 16,000, with more than one lakh.
This suggests a strong hurdle at 17,100 and a strong base only at the 16,000 mark.
FII/DII activity
Foreign institutional investors (FIIs) remained net sellers of Indian shares for the third session in a row on Tuesday, following three back-to-back days of buying, according to provisional exchange data. 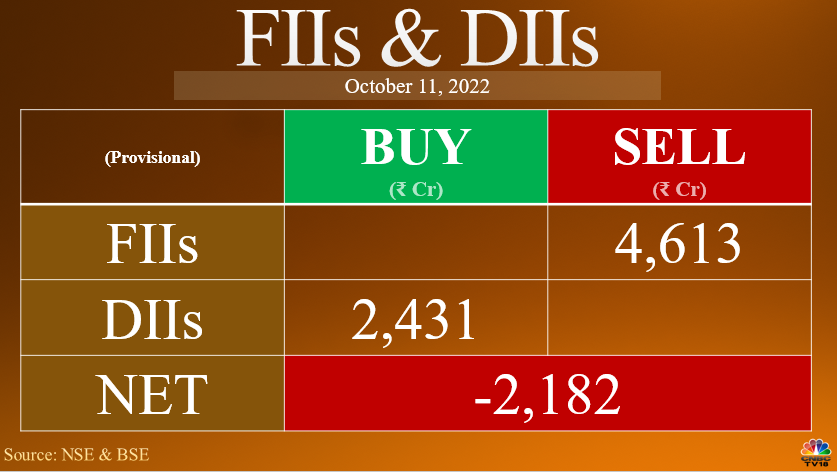