Trade setup for Friday, November 25: Experts see more upside in the market as long as the Nifty50 defends 18,400. Here's what the technical charts suggest.

Indian equity benchmarks clocked record closing highs on Thursday and finished the November derivatives series more than four percent higher. Gains in financial, IT, oil & gas and FMCG shares were the biggest boosts for both headline indices, with the Nifty Bank also scaling a peak.

Globally, optimism on a slower pace of increases in COVID-era rates following minutes of the Fed's last policy review drew the markets higher.

The Nifty50 has formed a long bullish candle on the daily chart, according to Shrikant Chouhan, Head of Equity Research (Retail) at Kotak Securities.
It appears to be holding on to a higher high and a higher low formation on the daily as well as intraday charts in a broadly positive sign, he said.
Nifty Bank poised for higher levels
"The Nifty Bank made a comeback on the expiry day with full strength and knocked out the bears from the resistance zone of 42,600-42,800. The fresh breakout in the banking index on the daily chart may lead to a move towards 44,000 in the near term," said Kunal Shah, Senior Technical Analyst at LKP Securities.
He sees lower-end support for the index at 42,600. "Broader participation will resume in the market."
Here are key things to know about the market ahead of the November 25 session:
SGX Nifty
On Friday, Singapore Exchange (SGX) Nifty futures — an early indicator of the Nifty index — were down 42.5 points or 0.2 percent at 18,625.5 at the last count, having declined as much as 58 points earlier in the day.
Global markets
Equities in other Asian markets were largely in the red on Friday, following the Thanksgiving holiday on Wall Street, with MSCI's broadest index of Asia Pacific shares outside Japan down 0.4 percent at the last count. Japan's Nikkei 225 was down 0.3 percent and Hong Kong's Hang Seng 0.8 percent, though China's Shanghai Composite was up half a percent.
S&P 500 futures were up 0.2 percent. On Wednesday, the S&P 500 finished 0.6 percent higher, the Dow Jones rose 0.3 percent and the Nasdaq Composite one percent, after minutes of the Fed's last policy meeting hinted at a slowing pace of rate hikes soon.
What to expect on Dalal Street
Kotak Securities' Chouhan believes there are chances the Nifty50 could hit 18,600-18,700 levels as long as it holds support at 18,400.
However, he warns that below 18,400, the uptrend would be vulnerable.
Key levels to watch out for
The maximum call open interest is accumulated at the strike price of 18,600, with 1.2 lakh contracts, and the next highest at 18,700, with almost 93,000, according to provisional exchange data. The maximum put open interest is at 18,000, with nearly two lakh contracts, and at 18,400, with 1.6 lakh.
This suggests strong resistance at 18,600 and a cushion at 18,200 followed by more support at the 18,000 mark.
FII/DII activity
Foreign institutional investors (FIIs) returned to net buying of Indian shares on Thursday after four days of selling, according to provisional exchange data. 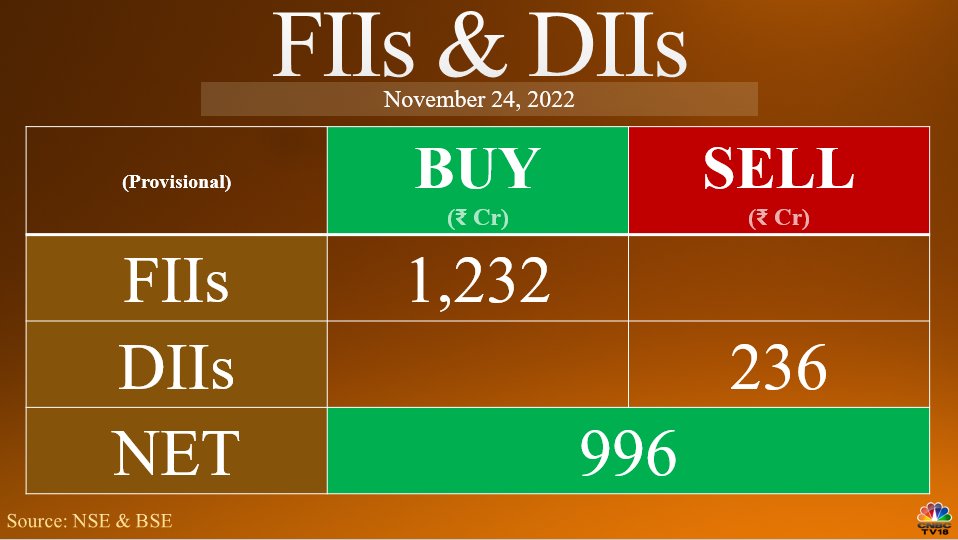