Top stocks that fund managers bought and sold in March

Updated : April 16, 2019 11:42:11 IST
Net Inflows into Equity MFs (including ELSS) rose to Rs 11,756 crore in March 2019, the highest in five months.
However, despite the strong inflows into mutual funds, they were net sellers of stocks in March.
Mutual Funds were net sellers of Indian stocks for the first time since July 2016.

Net Inflows into equity mutual funds (including ELSS) rose to Rs 11,756 crore in March 2019, the highest in five months. Inflows through MF SIPs remained steady around the Rs 8,000-crore mark, with Rs 8,055 crore coming in over the month.

However, despite the strong inflows into mutual funds, as per the Securities Exchange Board of India (Sebi) data, they were net sellers of stocks, selling as much as Rs 6,348 crore in March 2019, as compared to a buying of Rs 7,020 crore reported in February 2019. Mutual Funds were net sellers of Indian stocks for the first time since July 2016.

From a sectoral perspective, fund houses were aggressively buying insurance and power stocks, while selling oil and finance stocks.

According to a report by Prabhudas Lilladher, insurance, which included ICICI Pru Life Insurance, SBI Life Insurance, and HDFC Life Insurance were the most sought after stocks by mutual funds. Power stocks too, attracted fund managers, solely due to National Thermal Power Corporation (NTPC). 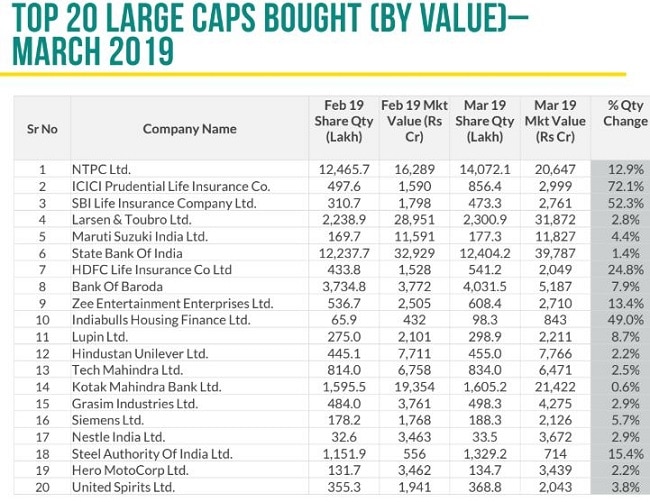 BPCL, Reliance Industries, and IndianOil were among the most sold oil stocks. Bajaj Finance was among the most sold LargeCap Finance stock. Among Healthcare stocks, major selling was witnessed in Dr Reddys Labs, Divi’S Laboratories and Aurobindo Pharma. In IT and Auto stocks, TCS, NIIT Tech, Eicher Motors and Bajaj Auto were the top sold stocks, the report added.