Titan stock price: Big Bull Rakesh Jhunjhunwala’s favourite stock Titan jumped about 8 percent on Thursday after the watch-to-jewellery maker posted a 205 percent YoY jump in the first quarter of FY23 given the low base and robust growth in all segments—jewellery, watches and wearables, eyecare and other businesses. There is a notion among market participants that a strong business update by the Tata Group company hints at its sturdy performance in the coming months.

TRADE
Titan Company, big bull Rakesh Jhunjhunwala's favourite stock, has posted its first normal quarter in the April-June period of FY23 after FY20 when the COVID-induced lockdown began, according to domestic brokerage firm Prabhudas Lilladher. The company could have hoped for a better 2022-23, but last week, the government hiked gold Customs duty to curb imports, taking some sheen off the quarterly performance.
After the watch-to-jewellery maker posted a 205 percent year-on-year jump in the first quarter of FY23 given the low base and robust growth in all segments— jewellery, watches and wearables, eyecare, and other businesses — the stock rallied about 8 percent on Thursday.

There is a notion among market participants that the strong business update hints at a sturdy performance in the coming months. Foreign brokerage firm Citi said that there is an expected improvement in demand.
Prabhudas Lilladher has also raised its earnings per share estimate for FY23 by 16.6 percent and for FY24 by 13.4 percent.
Ashish Kyal of Waves Strategy Advisors said, “Overall Titan, we had a very huge gap from the Rs 2,000 levels towards to 2,100 and then it is consolidating and the gap is sustained. This was just after a huge volumes also so that is a very good sign”.
“So as long as I think the gap towards the level of Rs 2,090 is protected, the trend will be positive. Some sideways action is expected post which we should go towards the level of Rs 2,250, that will be the target on Titan and the stop loss can be kept at around Rs 2,070 levels on the downside,” he added.
Also Read | Titan will start selling Tanishq jewellery in North America this fiscal
To know what lies ahead, one needs to see how the firm climbed out of the pandemic lull in consumption and spending.
Askshaya Tritiya adds sparkle to jewellery sales
People came out in big numbers to buy jewellery during Akshaya Tritiya after lockdown restrictions made many postpone purchases. “Both walk-ins and buyers grew in line with revenues whereas ticket size marginally improved compared to the first quarter of FY22,” the company said. Subsidiary CaratLane also achieved its highest sales on the day of Akshaya Tritiya. This was was 20 percent higher than Dhanteras of 2021.
Prabhudas Lilladher said Titan was gaining from an increased focus on the wedding segment, lighter jewellery and designs, and regional preferences. The brokerage also pointed out that studded jewellery sales were higher than plain gold items. Jewellers almost always make better profits from studded jewellery as making charges are higher and the gold used is not of 22 karat purity.
Net store expansions also helped. The company said it commissioned six new domestic stores under the Tanishq brand and 13 stores under Mia, taking the total store count for both brands to 463. 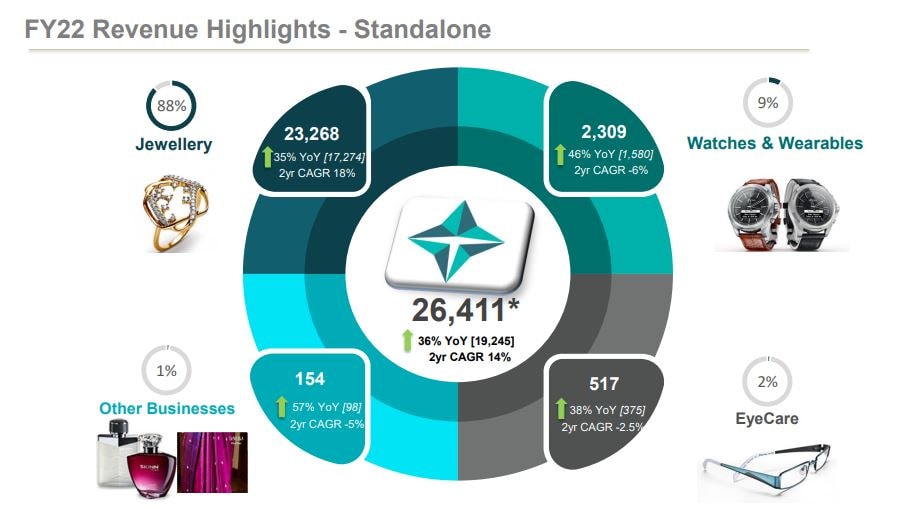 Source: Company's Investor Presentation
Watches and wearables
The watches and wearables segment achieved its highest quarterly revenue with healthy growth witnessed across all brands and products. The wedding season worked really well for all brands and channels, especially in April and May, Titan said.
It also launched several new products in this quarter. Store additions were made in this segment, too.  The firm added 39 stores (net) during the first quarter, taking the store count to 882, as per a brokerage note.
Eyecare and other businesses
Meanwhile, the growth in the eyecare division was driven by both Titan Eye Plus and Trade and Distribution channels. In this segment, the firm added 56 stores, taking the store count to 789. The company, according to Prabhudas Lilladher, plans to add 1,000 Titan Eye Plus outlets by FY23.
Other businesses—fragrances, fashion accessories, Indian dress wear—also witnessed stellar growth. Brand SKINN tapped into the premium segment. Indian dress wear sales grew nearly seven times, with brand Taneira expanding its national presence by adding six stores in the quarter.
Fastrack launched a new collection introducing new sub-categories of commuter bags and small totes. After the company had posted a sub-par show in the last quarter of the previous financial year, Jhunjhunwala had asked the management to focus on reviving Fastrack, the fashion accessory brand.
“We have to get to work on Fastrack. India is such a young country and Fastrack is a desired brand,” Jhunjhunwala had said. 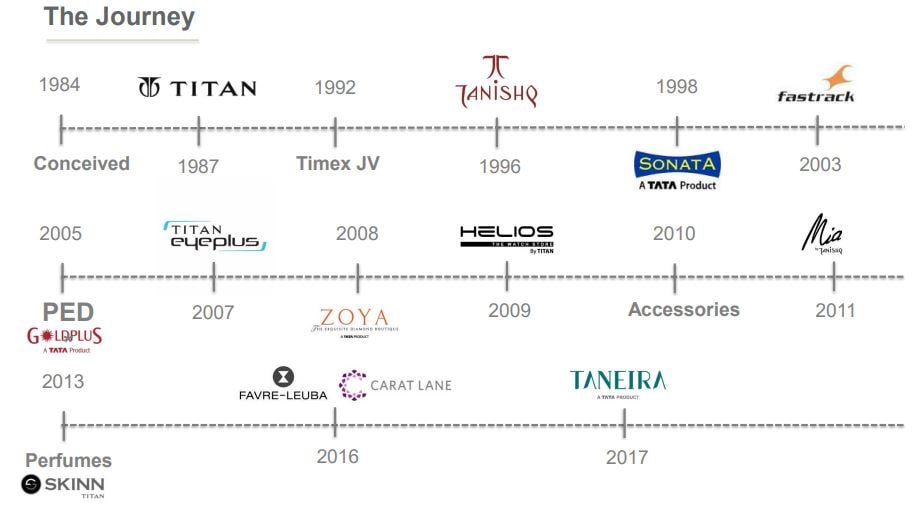 Source: Company's Investor Presentation
What about the firm's future prospects
Citi has said the company's market share gain story is "far from over". The company is betting big on store expansion despite its online business doing well. The company has added 125 new stores in the first quarter of this financial year.
Titan's focus on lighter jewellery, which sells faster online, and studded jewellery, which provides better profits, are likely to help keep the sales momentum going. New launches in other segments are also helping the company.
Citi, however, believes that the gold import duty hike to 15 percent from 10.75 percent earlier and volatile gold prices are some key risks. Gold is a natural hedge against inflation and India is the world’s second-largest gold consumer. The import duty was hiked as a surge in imports was putting pressure on the current account deficit (CAD).
Deven Choksey of KRChoksey told CNBC-TV18: "The larger part of the story is the 20-percent-plus kind of a CAGR growth in the jewellery business. Even eyewear and watch are registering smarter growth, of course, on a lower base of last year. But in the current year, on a sequential basis, they are expected to grow. So, one could buy at lower levels, if the market gives an opportunity.”
According to Harendra Kumar, Managing Director at Elara Securities, though Titan is a growth kind of stock pick, the framework for the markets is value.
“Most fund managers are searching for value. And that is actually outperforming growth, be it globally or locally. Titan, while it's a great company, faces challenges in terms of how portfolio managers are viewing their portfolio allocation," he said.
Kumar said that over the long-term, as an individual stock pick for individuals or discretionary portfolio managers, Titan continues to be a good pick. "But in terms of the current setup of the market, I think all high P/E stocks are being challenged, and Titan falls there. So, we are not so positive about the price performance of Titan over the medium term."
Catch up on all LIVE stock market updates here.
Tags
next story