Updated : July 16, 2019 01:17 PM IST
BSE Finance and Nifty Fin Services have outperformed benchmarks, gaining 10 percent and 19 percent, respectively during the period.
In the BSE Finance index, of 113 stocks, 48 gave positive returns with Capri Global Capital gaining the most.
In the Nifty Fin Services index, Power Finance Corporation was the top gainer, up 84 percent.

Non-banking financial companies (NBFCs) have been under pressure for almost a year now since the crisis at Infrastructure Leasing and Financial Services (IL&FS) dried liquidity and withered access of funds for various NBFCs. The issues in the sector continue with the latest defaulter DHFL reporting a net loss of Rs 2,223 crore for the March quarter. The company said that its financial situation was so grim that it may not survive.

"We believe that the Indian NBFCs are facing the worst crisis ever which will take its own course. While there are no short cuts, the delay in injecting liquidity in troubled enterprise and some targeted resolution mechanism is slowly spreading to other segments in the economy. We believe that the rising contagion of this menace can significantly derail the economic recovery," said Prabhudas Lilladher in its report.

But despite the grave situation at hand, over 10 NBFC stocks have advanced between 30-120 percent in the last 1 year. BSE Finance and Nifty Fin Services indices have also outperformed benchmarks, gaining 10 percent and 19 percent, respectively during this time.

In comparison, benchmarks Sensex and Nifty rose 7.5 percent and 6.3 percent, respectively in the last 1 year.

On the BSE Finance index, of 113 stocks, 48 gave positive returns with Capri Global Capital gaining the most, up 120 percent.

On the NIfty Fin Services index, Power Finance Corporation was the top gainer, up 84 percent. 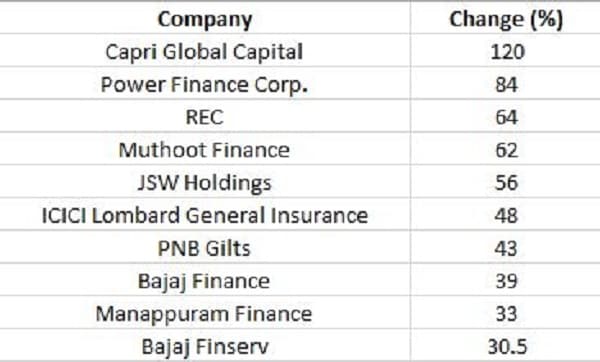 However, as these companies move towards their first-quarter earnings, analysts expect NBFCs to continue to be plagued by liquidity constraints and hence advise the investors to remain cautious.

"With new challenges emerging for NBFCs, Q1FY20 is unlikely to show any respite from the trend of the past couple of quarters. Even as concerns on high funding costs and sluggish growth persist, liquidity issues continue to cause problems. Since NBFCs recalibrate their balance sheets in order to limit credit risks and combat liquidity cycles, valuation multiples are likely to remain under pressure. Due to RBI’s timely intervention tightening liquidity is not a concern yet, however, increased risk perception adds to unease investor interest into NBFC," the brokerage added.