The real story for investors lies inside the Sensex

Updated : May 29, 2018 12:29 PM IST
Churn is a constant in the index, but what is more revealing is the sectoral composition of the index—not by weight of stocks, but by the number of companies represented from a sector.
Clearly segments where growth and future prospects dimmed lost favour, while those where they brightened gained higher representation.
The biggest gainer — financials — has emerged as the best proxy for the Indian consumer story, and that is what is driving interest in them and causing this overweight representation in the index.

To find the truth, you need to scratch the surface and look deeper. And if you dive a little under the skin of the barometer of the Indian stock market, BSE’s Sensex, some interesting facts are revealed.

If you have been in the market, you’ll recall that Reliance Communications was a Sensex stock till August 2011. To think that in 2018 the company will be battling to save itself from insolvency proceedings would have taken a leap in imagination then. Like the company, there have been several other company’s stocks that have been part of the index but dropped out over the past 7-8 years.

Tata Power, Hindalco and Vedanta made way for Asian Paints, Adani Ports & SEZ and Lupin in 2015. BHEL was replaced by Powergrid in 2016 and Lupin, Cipla and GAIL made way for Yes Bank, Kotak Bank and Indusind Bank in 2017.

So, churn is a constant in the index. But what is more revealing is the sectoral composition of the index—not by weight of stocks, but by the number of companies represented from a sector. While auto, IT, FMCG and Power & Infra have been able to hold their ground, capital goods has made an exit. The weight of metals & mining has shrunk, pharma has gained and then shrunk, while financials have notched big gains. In fact, the remarkable increase of financials from 17% representation to 27% is the big story. 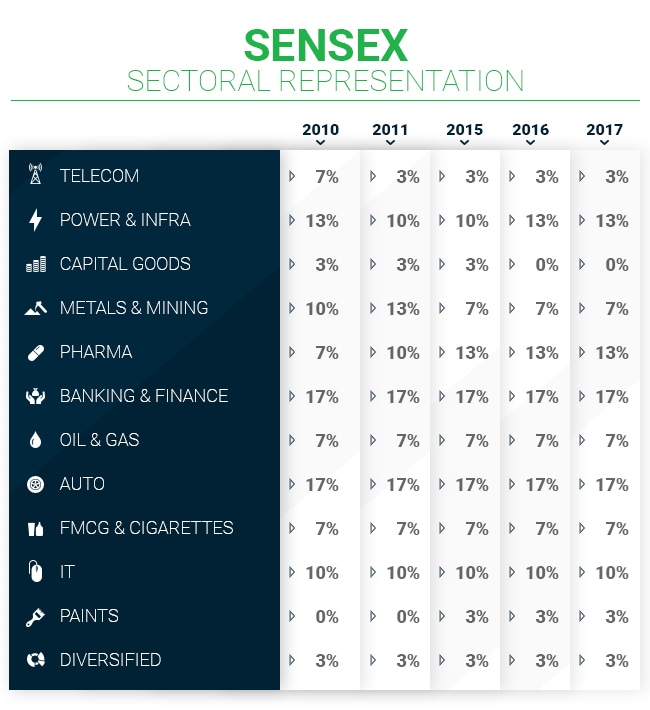 Clearly segments where growth and future prospects dimmed lost favour, while those where they brightened gained higher representation. And this is clearly evidenced on the ground. There has been no meaningful growth in manufacturing to keep investors interested in capital goods. Similarly, pharmaceutical companies have been struggling in the past—the biggest success story in the sector, Ranbaxy, fell sharply from grace.

But coming back to the biggest gainer—financials—my contention is that they have emerged as the best proxy for the Indian consumer story, and that is what is driving interest in them and causing this overweight representation in the index.

Let’s step back and think of the growth sectors in the past few years. After the IT services story, the next big themes were telecom, internet and e-commerce. Unfortunately, while one lost favour due to the competitive intensity, others didn’t find any representation in the index. In fact, for IT services companies today, digital is the big growth driver.

In the absence of any good e-commerce play, the next best proxies were logistics players, bandwidth providers and payments. And the last, linked back into the banking system. So, if you wanted to play the Indian consumption story—offline and online retail, housing, mobiles et al—the best option was consumer finance and payments.

How you would have wished you could invest in an Apple or Samsung, in a Google of Facebook, or even in an Amazon. But in the absence of such opportunities investors exploited the next best alternative—financials. To give you a sense of the opportunity loss, Flipkart valued at $20 billion by Walmart would rank among the top 20 listed companies by market capitalisation in India—and only venture capitalists and private equity investors made money.

Clearly, the bet of investors on financials has paid off. Look at the success story of Bajaj’s financial services business. The management obviously played its cards right, but if the underlying market forces (read consumption growth) had not supported the model, the story might have been very different today.

Lenders with high exposure to corporates are the ones bearing the brunt of the write-offs today. The retail focused banks and NBFCs are doing far better. In fact, most banks are now realigning their focus towards serving the consumer, and that’s where the real growth is, at least for a while.

Playing the consumption theme in India, which is driven by services growth (mostly unrepresented in the index), makes ample sense. Both rural and urban segments hold promise, and if you can find the right proxy, you should be taking money home.

For those betting on Make in India, for me the signal of its success will be when capital goods stocks make it back into the Sensex.
Tags analysis BSE sensex shares Stock market Views