Ten key things that will keep traders busy this week

Updated : January 27, 2020 06:54 AM IST
The market will remain open on Saturday for Budget, taking the total working days this week to six.

The market saw profit-booking and consolidation in the week ended January 24 after hitting a record high, indicating caution ahead of the much awaited key event of the year - Budget 2020 - which is scheduled to be presented on February 1.

The cut in FY20 economic growth forecast to 4.8 percent by the International Monetary Fund (IMF) and mildly subdued Q3 results from banks and select heavyweights dampened the mood of investors. The Nifty50 and BSE Sensex fell 0.8 percent each during the week after more than 3 percent rally in the previous two consecutive weeks.

But the outperformance of broader markets continued due to buying in quality mid and small-caps due to attractive valuations, ahead of budget. The BSE Midcap index climbed 0.7 percent and Smallcap index rose 0.93 percent during the week.
The coming eventful and longer than a usual week is expected to see more volatility amid earnings and ahead of the Budget which could be the only reason for any rally if it takes place during the week, experts feel.

"We feel that the cautious trend (which started due to earnings marginally lower than estimates from IT and banks) will be maintained in the near-term since a lot has been factored in the market about budget wish list and expectation of revival in earnings growth. Hence going ahead, market direction will depend on the actual budget announcements & the performance of Q3 result," Vinod Nair, Head of Research at Geojit Financial Services told Moneycontrol.

Jimeet Modi, Founder & CEO of SAMCO Securities advised investors not to be impulsive to invest solely on the basis of Budget expectation but should invest in keeping fundamentals of the businesses in mind. "It would be wise to wait for a correction before deploying fresh funds."

If the Budget does not meet the high expectations, the market can see a sharp selloff after it; and the odds of this look high, this time too, Modi feels.

The market will remain open on Saturday for Budget, taking total working days to six in the coming week.

The key event of the week would be the Budget and this time it would be much important than any other past Budgets considering the protracted economic slowdown. Even after several measures announced by the government including a sharp cut in the corporate tax rate, the street expects more such measures that could really revive the economy sooner than later.

Expectations increased significantly as the market rally suggests, especially after Prime Minister Narendra Modi had a lot of long meetings with corporates, bureaucrats, etc earlier this month with the intention of faster resolution to an economic slowdown and to achieve $5 trillion targets. This indicated that the Street could be prepared for some amount of fiscal slippage in the next financial year.

"In terms of fiscal deficit, the market is even ready to handle a fiscal deficit in the range of 3.6-3.8 percent for FY20 against 3.3 percent announced in the last budget. It is also expected that for FY21 fiscal deficit target will be prepared with some ease or flexible, considered the requirement of growth for the economy as the main agenda," Vinod Nair said.

The auto sales data for the first month of 2020 will also be released on February 1 along with ongoing earnings season, so it will remain a hectic day for the market.

Analysts largely expect some growth in passenger vehicles, but the commercial vehicle segment is expected to be weak and there could be a mixed trend in the two-wheeler segment.

Earnings would remain in focus for three more weeks. So far this has been a mixed earnings season considering the economic slowdown and no major positive surprises.

Globally the key event to watch out for would be the Fed interest rate decision and its commentary on Wednesday midnight.

Economists largely expect the FOMC to keep interest rates unchanged (in the range of 1.5-1.75 percent) in the January policy meeting, considering the outlook on growth and inflation.

Experts feel the Federal Reserve will closely watch the impact of recent US-China trade deal, US-Mexico and Canada deal and inflation before taking any interest rate decision going ahead.

Bank of England will also announce its monetary policy decision during the week, on January 30. There as well, economists expect Mark Carney, the governor of BoE who is retiring in March and to be replaced by Andrew Bailey, to hold rates in the MPC meeting given the better-than-expected growth during the month.

Finally, United Kingdom is set to exit the European Union by next week's January 31, 2020 deadline as British Prime Minister Boris Johnson on January 24 signed a withdrawal agreement, paving the way for United Kingdom's exit from the EU.

"Today (Friday) I have signed the Withdrawal Agreement for the UK to leave the EU on January 31st, honouring the democratic mandate of the British people,“ Johnson said in his tweet.

“This signature heralds a new chapter in our nation’s history," he added.

The voting in European Parliament will take place on January 29 for withdrawal agreement.

The Nifty50 has taken support around the 50-DEMA on the daily chart and closed higher for the second consecutive session, forming a bullish candle on daily charts as closing was higher than the opening price.

On the weekly scale, the index formed a Bearish Engulfing pattern as it closed 0.8 percent down during the week. The current week's candle body completely engulfed the preceding week's candle body hinting that this market might have posted a near term top around 12,430 levels, experts feel. They advised caution ahead of Union Budget.

"Market is climbing higher taking support at the rising trend line since October of last year. However, the velocity is waning with every rise which makes the level of 12,050 in Nifty50 very crucial to sustain the upward trend. Any move below 12,050 levels should be seen as a beginning of a bigger correction, however, till that time traders can keep long and buy on declines with weekly lows as stops. Volatility will be high and therefore traders should be more cautious," Jimeet Modi said.

India VIX moved up by 10.12 percent from 14.13 to 15.56 levels during the week. VIX continued its rise for the fourth consecutive week. Experts expect the volatility to move higher ahead of the upcoming Union Budget 2020.

Apart from FOMC meet and Brexit deal, here are other key data points to watch out for in the coming week: 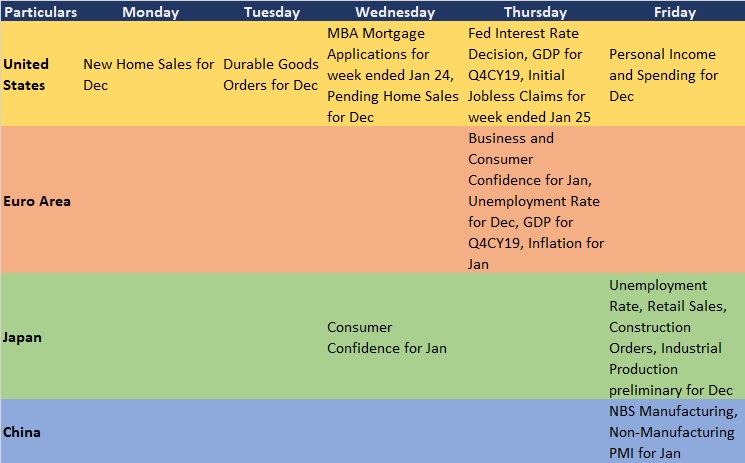