Ten key factors that will keep traders busy this week

Updated : December 29, 2019 05:02 PM IST
Experts feel that the market is expected to see another volatile week amid lower-than-usual volume due to holiday season. But the focus would gradually shift to October-December quarter earnings and Budget 2020.

The market snapped from its rally of two consecutive weeks and closed the truncated week that ended on December 27 with a moderate loss, dragged by select stocks like Reliance Industries, ITC, HDFC Bank, TCS, etc.

In fact, the rally on December 27, after a three-day fall helped benchmark indices trim losses during the week.

Investors remained on sidelines amid expiry-led volatility and concern over the fiscal math of the government, but global sentiment remained positive due to the easing of US-China trade tensions.

Overall, it was a consolidation week for the market as investors turned to a holiday season with Santa Claus rally that lifted benchmark indices to historic highs and 3 percent higher in previous two weeks.

For the year 2019, the Sensex rallied 15 percent and the Nifty50 surged nearly 13 percent, whereas for the week, indices were down third of a percent and 0.2 percent respectively.

Experts feel that the market is expected to see another week of volatility amid lower-than-usual volume due to holiday season, but gradually, the focus would shift to October-December quarter earnings and Budget 2020.

"Markets are expected to remain volatile with a lot more dilly-dallying next week as it year begins with contrasting forecasts from market pundits. There will be a tint of optimism in the new year as the investing community starts preparing for a stellar Budget," Jimeet Modi, Founder & CEO, SAMCO Securities & StockNote told Moneycontrol.

Ajit Mishra, VP - Research at Religare Broking, also expects the prevailing consolidation to extend further in the index, with a bias on the positive side.

Stocks, on the other hand, would continue to see movement on both sides. Thus traders should focus more on stock selection, he advised.

The focus in the coming week would be on auto stocks (Maruti Suzuki, Tata Motors, M&M, Eicher Motors, Bajaj Auto, Hero MotoCorp, TVS Motor, Ashok Leyland, Escorts) as sales data for the month of December, and cumulative data for FY20 will be released by companies on first day of 2020.

Most experts expect only the passenger vehicle segment to report marginal growth during last month of 2019, whereas other segments, namely commercial vehicles, two-wheelers and tractors, may remain weak due to economic slowdown, they said.

Amid all the weakness, passenger vehicles (PVs) would be the only bright spot and we expect a mid-single digit growth of 5 percent in this segment driven by higher discounts, the brokerage added.

The Indian rupee move will be closely watched in the coming week as the currency continued to depreciate for the second consecutive week due to a consistent rise in crude oil prices, which all impacted domestic flows.

The currency weakened 23 paise during the week that ended on December 27, and 31 paise in earlier week which brought it near lowest level of December 4.

"Brent is heading towards the resistance of $69-70 a barrel, which should check the rupee depreciation eventually," said Amit Gupta of ICICI Direct who feels the rupee may continue to depreciate slowly in coming week.

Crude oil prices gradually moved up during the month and started trading more higher than its three-month high, which is critical for a country like India that imports more than 85 percent of its crude oil requirements, and which also impacts its currency.

International benchmark Brent crude futures jumped $12 a barrel from October lows of $56 a barrel to trade around $68.16 a barrel on December 27, which was really a big move. OPEC+ nation's additional oil cuts and shrinking inventory in the US lifted crude prices, while the rising hope for US-China trade deal in January also supported the prices.

"The current month price backwardation against future prices and rising spread between Brent and WTI indicates that the crude oil market are expected to remain tight in the coming months. If the US-China trade deal agreement is signed and OPEC nations continue its production cuts as planned; the oil market will remain balanced and optimism surrounding these events will keep price supportive," said Sakina Mandsaurwala of Narnolia Financial Advisors.

On last day of the year (January 31), the data for government's Budget value and the infrastructure output for November will be released. Current account and external debt data for the quarter that ended on September 2019 will also be declared on the same day.

Globally, the trade deal optimism is expected to remain for the coming days as most experts expect both countries to sign the deal in January. Hence the demand for riskier assets may continue, which started since after both US and China announced they have reached a phase one trade deal earlier this month.

US President Donald Trump, on December 24, told reporters that both countries would be part of a signing ceremony. “We will ultimately, yes, when we get together. And we’ll be having a quicker signing because we want to get it done. The deal is done, it’s just being translated right now.”

United States Trade Representative Robert Lighthizer, on December 13, had said representatives from both countries would sign the phase one trade deal agreement in the first week of January.

The Nifty50 closed a percent higher at 12,245.80 on December 27, and formed bullish candle on the daily charts, while for the week, the index closed 0.2 percent lower and formed a Doji kind of pattern on the weekly scale.

It moved within the territory of penultimate week's range and thus formed an Inside bar pattern on the weekly charts, indicating indecisiveness among the market participants.

Experts expect the rangebound trade may continue in coming week as well with 12,000-12,300 being a strong support-resistance.

"Nifty50 is trending higher, however, it may face resistance at 12,300 level, wherein profit booking may emerge. On the weekly charts, the Nifty50 has a made a Doji pattern, indicating confusion. However, many sectors are not replicating the Nifty50 movements, and hence action will shift to stock specific movement going forward," Jimeet Modi of SAMCO said.

If in case the index decisively trades below 12,100, then a bout of heavy profit booking can be expected till 11,800 very swiftly, according to him. "Traders may selectively take long positions with tight stop at weekly lows."

The above-mentioned Options data suggests that the Nifty could be in a wider trading range of 11,900 to 12,500 levels in coming sessions.

"The Nifty futures premium has risen to 80 points, which is the high seen in the last many series. We have seen the market going into consolidation at such a high premium," said Amit Gupta of ICICI Direct.

He believes the Nifty is in the process of forming a base near 12,000, while Call positions have shifted higher to 12,500, which remains a target for the index.

The volatility has declined from 15 percent to 11 percent in the December series. During the week gone by, India VIX dipped 5.35 percent to 10.52 levels.

"India VIX is currently hovering around its strong support zone of 10 – 11 and thus we see reversal in VIX in coming days," Chandan Taparia of Motilal Oswal Financial Services said.

Overall, foreign institutional investors (FII), despite the holiday season remained net buyers for the third consecutive week. They bought a net of Rs 1,155 crore worth of shares during the week, taking the total monthly inflow to over Rs 2,000 crore.

FIIs are heading towards the closing of the month with net inflow for the third straight month, though the flow could be lower as compared to the previous weeks due to the holiday season. They net bought more than Rs 21,000 crore worth of shares in October and November.

On the contrary, domestic institutional investors (DIIs) continued to be net sellers for the second week in a row and as a result, so far, they net sold more than Rs 1,500 crore of equities during the month. Profit booking as indices were near record high levels could be one of reasons.

For the year, the inflow from FII and DII remained strong as they both bought more than Rs 41,000 crore worth shares each despite the economic slowdown. Most experts feel the flow could be much higher in 2020.

Here are key global data points to watch out for in coming week: 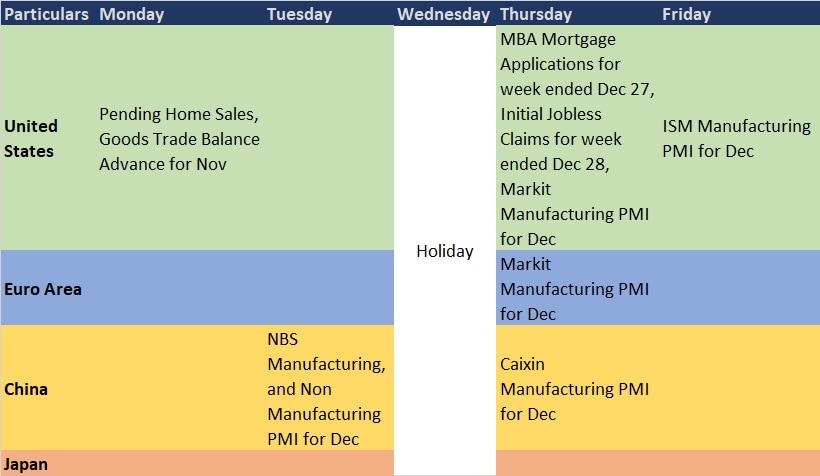