Ten key factors that will keep traders busy this week

Updated : February 17, 2020 06:19 AM IST
This truncated week will have only four trading sessions as the market will remain closed on February 21 on account of Mahashivratri.

The market witnessed volatility and ended flat week amid domestic data including weak CPI and WPI numbers. Global markets also put pressure due to increasing fear over the novel coronavirus in China.

India's retail inflation in January stood at 7.59 percent against 7.35 percent seen in December 2019. However, January core inflation was at 4.8 percent versus 3.7 percent in December.

The wholesale price inflation (WPI) for January stood at 3.1 percent versus 2.59 percent during December 2019.

This week is truncated with only four trading sessions as the market will remain shut on February 21 on account of Mahashivratri.

"With most of the major events now over, the market will now start focusing on Donald Trump's India visit later this month. In the coming week, the market would focus on export-oriented and automobile related stocks. Technically, the market is heading for the levels of 12,000 or 11,950 levels. On the higher side, 12,200 and 12,250 would be hurdles," Shrikant Chouhan, Senior Vice-President, Equity Technical Research, Kotak Securities, said.

The BSE large-cap was down 0.20 percent, BSE small-cap index fell 1 percent and the BSE mid-cap index shed 1.53 percent in the past week.

It expects 6 percent volume growth in 3QFY20 led by stronger sales in December partly offset by weaker sales in October and November, while blended realizations is expected to decline by 3.3 percent QoQ led by price declines in Central and West markets.

Coronavirus, now called 'COVID-19', remains one of the key monitorables for global markets, including India.

Chinese health officials on February 16 said that confirmed cases have jumped to over 68,500. The death toll in China has climbed to 1,665.

The company's Offer for Sale (OFS) opened for non-retail investors on February 14, which was fully subscribed on the first day.

The company announced that its promoters will offload 2.28 percent stake (14.8 crore shares) through the offer for sale (OFS) route as a base price of Rs 2,049 per share. Meanwhile, there is no discount offered to retail investors.

At base price, promoters of the company will be able to mop up over Rs 3,000 crore.

The promoters have been selling their stake through OFS and QIP as they have to comply with minimum shareholding norms and to bring down the stake to 75 percent by March 31, 2020.

Last week, the Indian rupee ended marginally higher at 71.36 on February 14 against February 7 closing of 71.40.

“Ever since the budget, USD/INR spot has been consolidating in a very tight range of Rs 71.10-71.50. Next week, we can see some FII/FPI participation in Avenue Supermarts (DMart) stake sale. This OFS related dollar inflows may support rupee," Rahul Gupta, Head of Research- Currency, Emkay Global Financial Services, said.

"However, focus will continue to be on the coronavirus and what extent it is creating any disruption to global growth, thus, 71.10 is a crucial support in spot, a break of which can take prices towards 71 and below, until then we expect the USD/INR spot to trade within 71-71.50 range," he added.

Oil prices remained under pressure however it registered their first weekly gain since early January.

Oil prices rose more than 1 percent and posted their first weekly gain since early January amid hopes demand will rebound.

The gains are backed by expectations producers will implement deeper output cuts to offset slowing demand in China caused by the coronavirus outbreak.

The Centre is likely to announce merger of 10 public sector banks to create four big banks. The merger process may be completed by April.

In August 2019, the government had announced four major public sector banks mergers, bringing down their total number from 27 to 12.

Nifty50 managed to hold 12,000 level and closed the week on flattish note as it formed a Doji candle on weekly scale and Bearish candle on daily scale on February 14.

"Markets reacted from our mentioned resistance zone of 12,250 and closed on a negative note. 12,000 is likely to act as near term support on the downside," Amit Shah, Technical Research Analyst with Indiabulls Ventures said.

The market breadth was negative for the third session in a row but nothing alarming as yet.

The options data on the Nifty index indicate stiff resistance at 12,200 where aggressive call writing has been observed on the weekly and monthly expiry.

"The index will continue to witness selling pressure and can decline towards the levels of 12,000-11,900 where fresh put writing has been observed," Kunal Shah, Derivative Analyst, Indiabulls Ventures said.

Here are the key corporate actions taking place in week ahead: 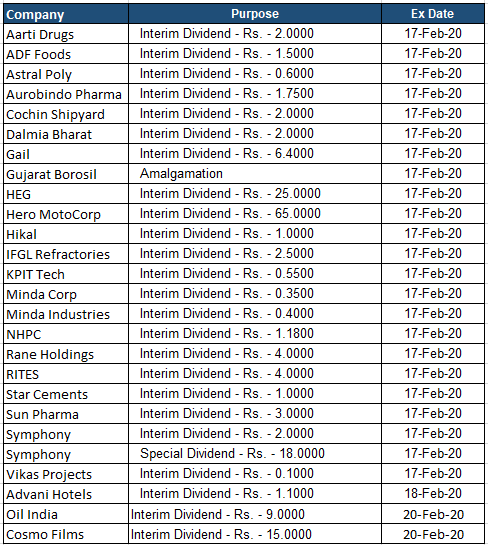 Here are the key global data points to watch out for in week ahead: