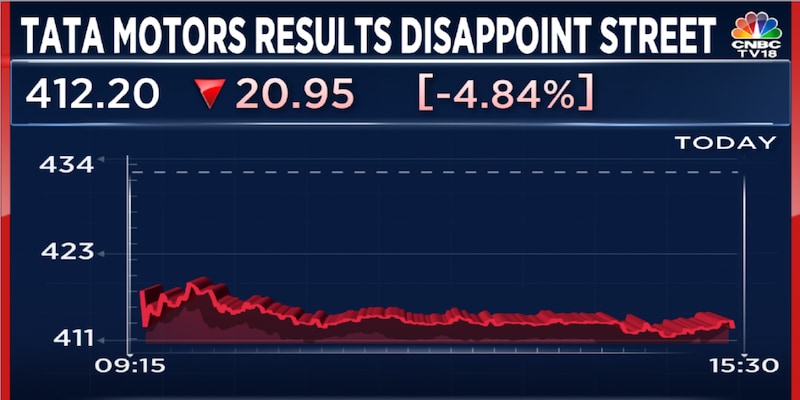 Tata Motors took a beating on Thursday a after the auto giant reported a quarterly net profit that was in start contrast to analysts' expectations of a net profit.

Tata Motors shares slumped on Thursday after the Tata group auto giant shocked investors with a net loss of Rs 944.6 crore for the July-September period, in stark contrast to expectations of a net profit. The Tata Motors stock ended 4.8 percent lower at Rs 412 apiece on NSE as the company's all-round miss gave analysts little to cheer about despite optimistic management commentary. 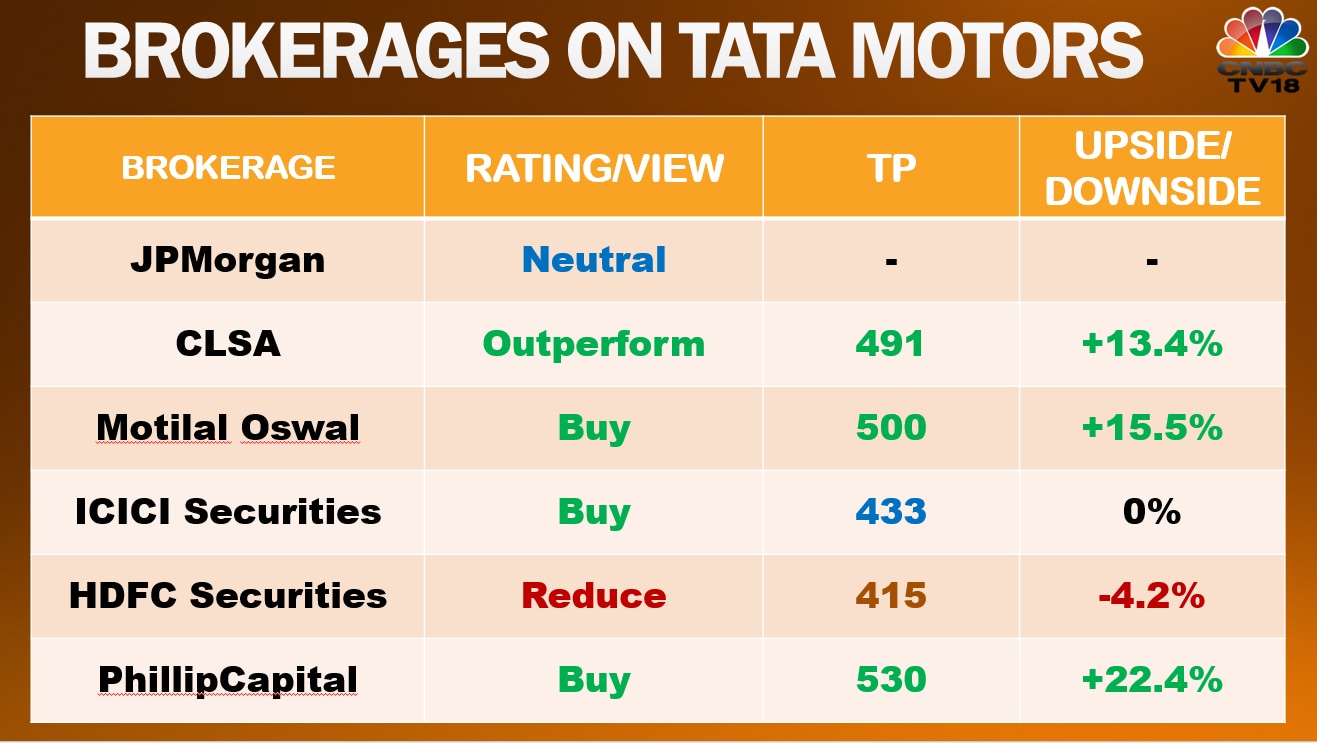 The quarterly net profit, however, narrowed by 78.7 percent compared with the corresponding period a year ago. The management said demand remains strong but will be tracked closely in view of global uncertainties.
Tata Motors' revenue increased 29.7 percent to Rs 79,611.3 crore compared with the year-ago period.
Analysts in a CNBC-TV18 poll had pegged Tata Motors' quarterly net profit at Rs 248 crore and revenue at Rs 811,366 crore.
Tata Motors' margin — or the degree to which a business makes money — improved by 40 basis points on a year-on-year basis to seven percent but fell way short of the analysts' expectations. 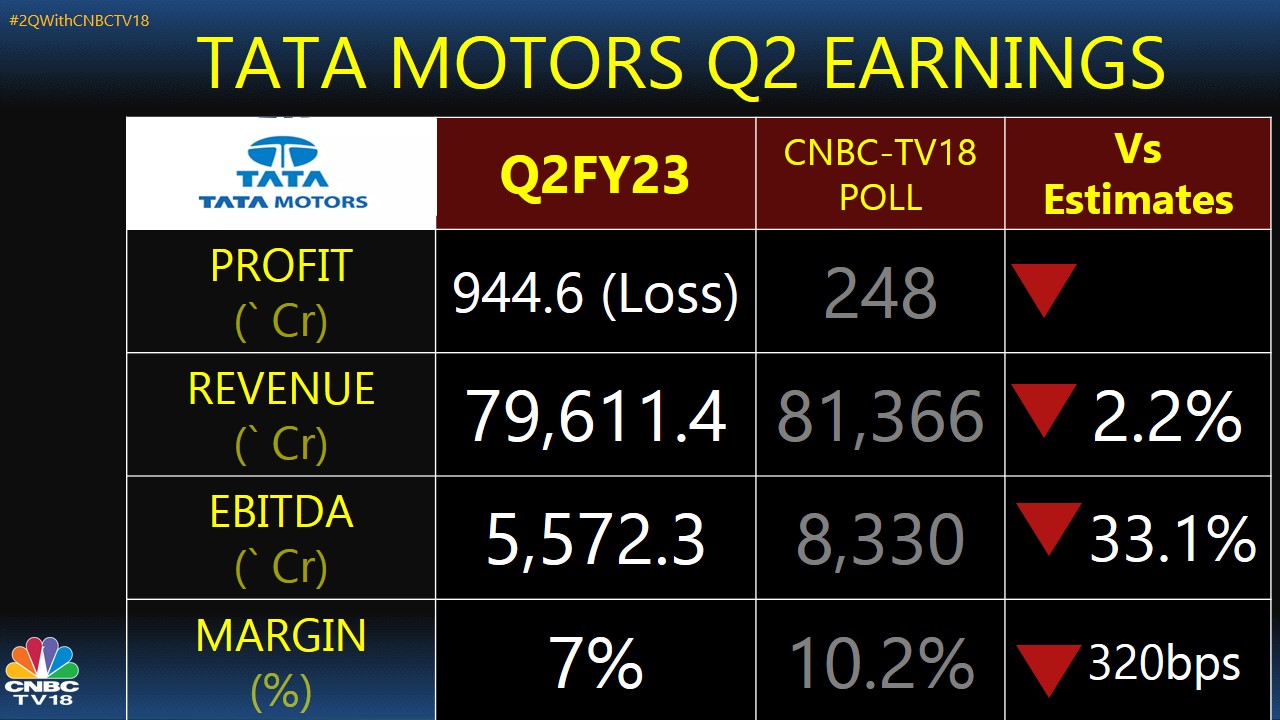 Jaguar Land Rover, a subsidiary of Tata Motors, reported a negative free cash flow of 15 million pounds, and scaled back its guidance. It expects the free cash flow to break even in the year ending March 2023.
Most brokerages see upside potential in Tata Motors after the release of the carmaker's quarterly earnings.
JPMorgan maintained a 'neutral' rating on the Tata Motors stock but reduced its target price by 8.9 percent to Rs 410, and cut its earnings estimates for earnings before interest, taxes, depreciation and ammortisation (EBITDA) for the company by 3-9 percent for three years ending March 2025.
The brokerage said the company's quarter operating performance came in better than its expectations driven by Jaguar Land Rover (JLR) even as its India business disappointed. 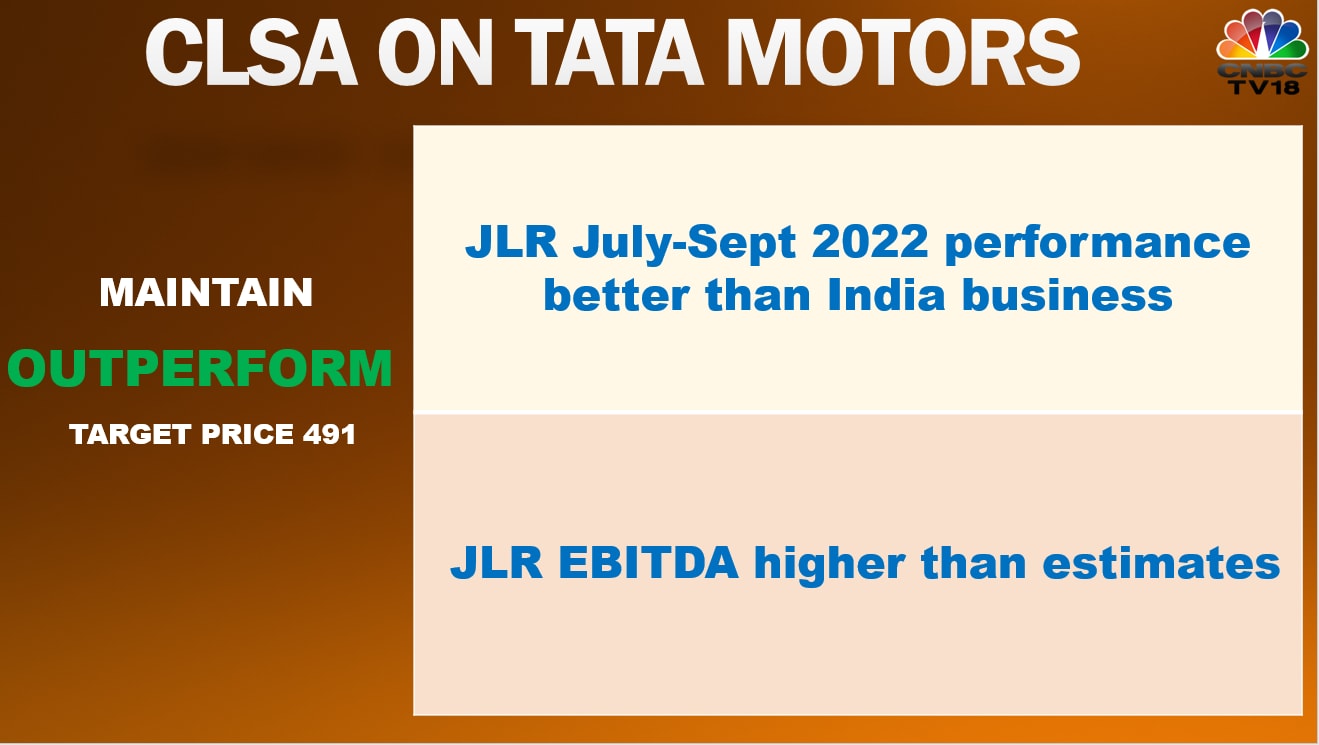 HDFC Securities pointed out that the rise in the auto maker's debt is a big concern, which makes it challenging for its management to meet its goal of making the company free of debt by the year ending March 2024.
Tata Motors' debt increased to Rs 59,900 crore in the three months to September 2022 from Rs 48,700 crore at the end of the year to March 2022.
The brokerage maintained a 'reduce' call on Tata Motors shares with a target price of Rs 415.
PhilipCapital expects the stock to gain more than one fifth of its value, saying it offers a great risk reward.
Catch latest market updates with CNBCTV18.com's blog
(Edited by : Sandeep Singh)
Check out our in-depth Market Coverage, Business News & get real-time Stock Market Updates on CNBC-TV18. Also, Watch our channels CNBC-TV18, CNBC Awaaz and CNBC Bajar Live on-the-go!