Missed the bus on Zomato stock? Experts advise on how to play it now

Missed the bus on Zomato stock? Experts advise on how to play it now

Zomato shares have seesawed within a range of Rs 114-147.80 so far since their Dalal Street debut. Technically, a lack of sufficient data -- the Zomato stock is only a fortnight old -- makes it difficult for analysts to assess its future movement.

Did you apply for Zomato's initial public offer (IPO), or grab the debutant's shares recently?

Last month, the Gurgaon-based food delivery company's shares listed on bourses at up to 53 percent premium to the issue price of Rs 76. The company said it will use the money raised to improve delivery infrastructure and add users. With that, the 13-year-old Zomato became the first generation of major Indian startups to go public.
Also read: Here are top D-Street debutants so far in 2021
The stock has managed to hold on to its listing day gains, though it is off its record highs. But like most other startups, Zomato is yet to make a profit. So does it make sense for investors to buy it at this price?
Analysts are divided over whether it is advisable to buy Zomato shares now, especially for those who missed out on the IPO and listing opportunities.
And those positive on the stock now say key things to watch going forward will be the company's profitability and its ability to demonstrate improvement in its business model, and how it tackles competition.
Market expert Hemen Kapadia told CNBCTV18.com he "wouldn't be very comfortable recommending buying Zomato at this juncture as it would be too aggressive", citing "uncomfortable valuation".
"I wouldn't even advise a buy-on-dips strategy unless someone wants it as a pure risky momentum play," said Kapadia of KRChoksey Securities. 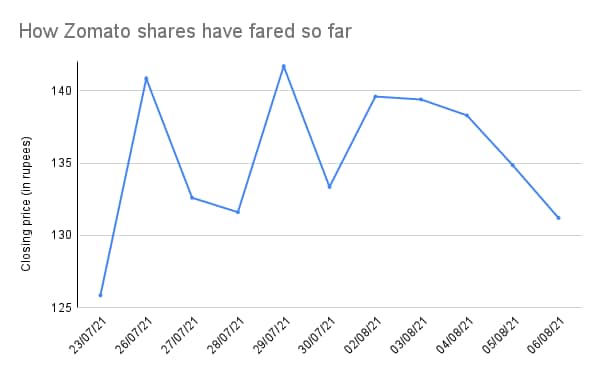 Zomato shares have seesawed within a range of Rs 114-147.80 so far. Technically,  lack of sufficient data -- the Zomato stock is only a fortnight old on Dalal Street -- makes it difficult for analysts to assess its future movement.
Kapadia pegged support for the stock at Rs 131-123.50, and resistance at Rs 141-148.
"The paucity of data makes an analysis quite tricky... The stock seems to be moving sideways without any clear directional bias," said Kapadia, who is not the only one skeptical on the shares now.
Can you buy the dip instead?
Investors should venture into Zomato shares with caution, according to independent adviser and market expert Sandip Sabharwal, who believes a dip in the stock to the Rs 90-100 range can "potentially provide trading investment opportunities".
In his view, both Zomato's price movement and valuations, at Rs 1 lakh crore of market capitalisation, are unsustainable "in light of no clear path towards profitability despite aggressive growth", he told CNBCTV18.com.
At the current price, Zomato's market value stands at Rs 1.03 lakh crore.
Zomato was richly priced even at the IPO level, however, given the frenzy in the market and the low floating stock associated with new listings, the stock had a good run in the first few days of listing.
"Near-term growth of the company has also been driven by lockdowns... The threat of new entrants given easy money availability at the private equity end these days is also a real possibility," Sabharwal said.
'No hurry to buy'
According to AK Prabhakar, Head of Research at IDBI Capital, the stock can be bought at levels below Rs 80 apiece. Until then, "there's no hurry to buy" he said.
He believes Zomato shares may return to the listing level soon, "in fact almost the issue price". It may become a stock of traders' interest where they could just trade in and trade out to make money.
"The company's topline growth will be the only thing for the next 5-6 years, so it's a different ballgame altogether. How fast the company grows and how deep it penetrates the market, and how fast its GMV (gross merchandise value) grows; these are going to be the important things to watch for now," he said. Gross merchandise volume is the total gross monetary value that a company realises from a marketplace over a given period of time.
Some are of the view that Zomato can be looked at from a long-term view.
Zomato is a pretty exciting space for investors but investors need to look at it from a longer-term perspective, according to Pratik Gupta, CEO and Co-Head-Institutional Equities at Kotak Securities.
“These are not stocks which one can invest with a short-term time horizon because the headline valuations for a lot of these new-age companies appear expensive. So here, you have to take a slightly longer-term view. These are not short-term investments, they are high-risk investments,” he told CNBC-TV18 recently. (Read more)
Just go for it?
Market veteran Raamdeo Agrawal said recently that he sees the beginning of a new era of investing in the Indian equity market with Zomato's listing.
“Today, top 10 companies are digital companies in the world and that’s the possibility for India," Agrawal, chairman of Motilal Oswal Financial Services, told CNBC-TV18. (Watch interview)
And Among those positive on Zomato shares at the current juncture is Vinod Nair, Head of Research at Geojit Financial Services.
"It is a new generation company growing at a rapid rate while the availability of such opportunities is scarce in the Indian equity market. Invariably, it will be at high demand and valuations will be at peak levels. During this early stage of the business cycle, the stock price and the valuation are unlikely to provide a correct view and assessment. The strength of the equity market & its platform will design the momentum," he told CNBC-TV18.com.
'Cannot avoid Zomato'
"We cannot avoid such a company in India today; be a part of the rally as long-term gains are expected," said Nair, who is bullish on Zomato shares from a long-term perspective. "Though the listing was much above expectations, the company's future performance is expected to be buoyant," he said.
Asked where he sees Zomato shares by the end of 2021, he said it is "very early and a short timeframe to comment about". He, however, added that given the high growth trajectory and the scarce availability of such tech-based companies, Zomato shares are expected to outperform the market.
Since their bumper debut on Dalal Street, Zomato shares have given a return of 14 percent so far, as against a nearly 3 percent rise in the S&P BSE Sensex benchmark, which recently clocked a lifetime high of 54,717. As of now, the 30-scrip headline index is up 14 percent so far this year, despite a whopping 103 percent from the pandemic lows of March 2020.
Rising broad market volatility will be a concern for the highly valued stock during the remainder of the year, according to Nair.
Such richly priced and loss-making entities are more vulnerable during market corrections, but corrections should be considered an opportunity as the company's high market share and strong balance sheet will help it gain traction, he added.
Nair suggests existing and new investors to accumulate Zomato shares. The stock price can be expected to stabilise during the year, he said.
Check out our in-depth Market Coverage, Business News & get real-time Stock Market Updates on CNBC-TV18. Also, Watch our channels CNBC-TV18, CNBC Awaaz and CNBC Bajar Live on-the-go!