According to Motilal Oswal, TCS’ business momentum has remained intact. Its constant currency revenue growth was seen at 12.1 percent YoY in Q3FY19, which is the highest in the past 14 quarters.

Motilal Oswal in its research report maintains a “neutral” view on TCS at a price target of Rs 2,000 per share.

According to its research report, TCS’ business momentum has remained intact. Its constant currency revenue growth was seen at 12.1 percent YoY in Q3FY19, which is the highest in the past 14 quarters. Amid the heavy pricing pressure that the industry has witnessed, the company has managed to retain its guidance and is scaling up its digital segment, said report.
Oswal added, "TCS has seen the lowest attrition rate at 11.2% in Q3FY19 as compared to its peers. The company has also significantly reduced its dependence on visas."

Based on the above, Motilal Oswal expects TCS’ revenue to grow at least in line with the industry as the heavy legacy exposure gradually withers down. In the absence of the appreciating trend of the INR, it should be able to hold on to its margins, which will be a function of greater revenue per employee and lower headcount growth versus revenue growth, said the report. 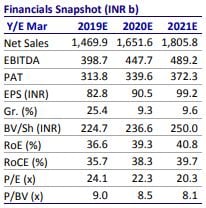 The brokerage believes ramp-up in a cluster of large deal wins and accelerating growth in the digital segment have resulted in the return of double-digit growth trajectory. Thus, expect constant currency revenue CAGR of 10.5 percent over FY18-21 and EPS CAGR of 14.5 percent during this period.
Check out our in-depth Market Coverage, Business News & get real-time Stock Market Updates on CNBC-TV18. Also, Watch our channels CNBC-TV18, CNBC Awaaz and CNBC Bajar Live on-the-go!