Trade setup for Thursday, May 19: The Nifty50 has to hold key support levels to move to higher levels, warn experts. Here's what the technical charts suggest.

Indian equity benchmarks finished a choppy session on Wednesday with minor cuts, taking a breather after their best single-day performance in three months. 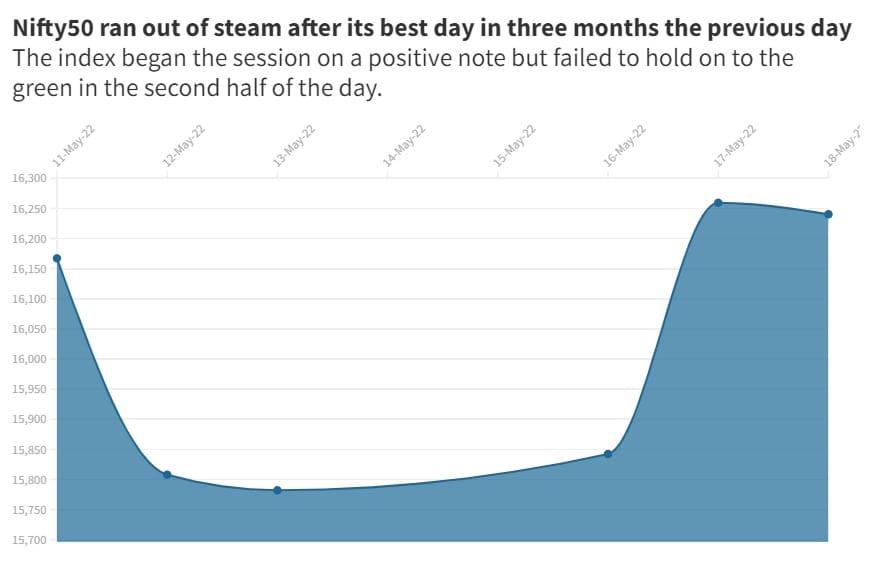 What do the charts suggest for Dalal Street now?
The Nifty50 has formed a small bearish hammer kind of candle on the daily chart, suggesting rangebound action in the near future, according to Shrikant Chouhan, Head of Equity Research (Retail) at Kotak Securities.
Near-term trend intact
HDFC Securities' Senior Technical and Derivative Analyst, Subash Gangadharan, is of the view that the short-term uptrend of the index remains intact. A crossover is still in place as the 20-period moving average on the 15-minute chart is above the 50-period one, he pointed out.
"The Nifty looks set to stage a further pullback rally in the very near term as long as crucial support at 16,071 is not broken," he said.
Here are key things to know about the market before the May 19 session:
SGX Nifty
Singapore Exchange (SGX) Nifty futures — an early indicator of the Nifty index — fell as much as 353.5 points or 2.2 percent to 15,882 in early hours on Thursday, suggesting a gap-down opening ahead on Dalal Street.
Global markets
Equities in other Asian markets suffered deep cuts on Thursday as fears resurfaced about worsening inflation and its impact on world economic growth. MSCI's broadest index of Asia Pacific shares outside Japan was down 2.2 percent in early hours.
Japan's Nikkei 225 was down 2.6 percent, China's Shanghai Composite 0.8 percent, Hong Kong's Hang Seng three percent, Singapore's Straits Times 0.8 percent and South Korea's KOSPI 1.5 percent.
S&P 500 futures were down 0.4 percent. On Wednesday, the three main Wall Street indices tanked as inflation scare fuelled uncertainty. The S&P 500 plunged four percent, the Dow Jones 3.6 percent and the tech stocks-heavy Nasdaq Composite 4.7 percent.
What to expect on Dalal Street
Levels of 16,200-16,150 are expected to act as key support for day traders, above which, the index can move up to the 16,400-16,450 zone, Chouhan said.
Otherwise any uptrend can be vulnerable and lead to the Nifty retesting the 16,050-16,000 band, he said.
Important levels to watch out for
The Nifty50 managed to stay above its five- and 10-day moving averages for a second straight day.
FII/DII activity

Call/put open interest
The maximum call open interest is accumulated at the strike price of 16,500, with two lakh contracts, and the next highest at 16,600 and 16,700,  with 1.4 lakh each, according to exchange data. On the other hand, the maximum put open interest is at 16,000, with 1.3 lakh contracts, and 15,800, with 1.1 lakh.
This shows strong resistance at 16,500 and immediate support comes in at the 16,000 mark.
Long build-up
Here are five stocks that saw an increase in open interest as well as price:
Long unwinding
(Decrease in open interest as well as price)
Short covering
(Increase in price and decrease in open interest)
Short build-up
(Decrease in price and increase in open interest)
52-week highs
Two stocks on the BSE 500 — the broadest index on the bourse — hit 52-week highs: ESAB India and Mangalore Refinery.
52-week lows
A total of six stocks on the index hit 52-week lows: Hindustan Petroleum, Dr Lal, Metropolis, Thyrocare, Route and Amber.
Fear gauge
The India VIX — known in market parlance as the fear index — fell two percent to settle at 22.3 on Wednesday.
Check out our in-depth Market Coverage, Business News & get real-time Stock Market Updates on CNBC-TV18. Also, Watch our channels CNBC-TV18, CNBC Awaaz and CNBC Bajar Live on-the-go!