It was not just the benchmark indices, even mid and smallcaps recovered from their low levels.

Out of the total 750 stocks in the BSE Smallcap index, 60 percent gave positive returns during the period. Top 45 stocks on that list rallied 50-195 percent, as per the study of historical data. 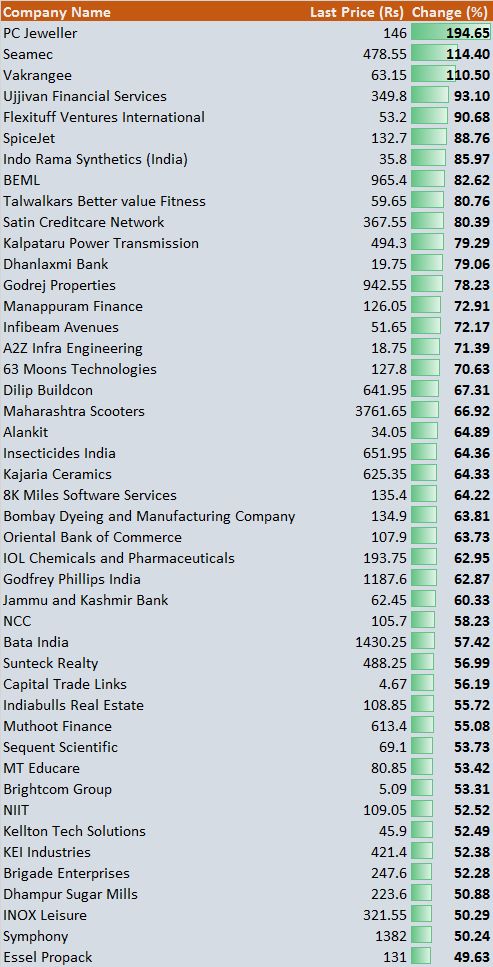 The rally seen across segments during the October-April period was largely on the back of value buying, favourable macros (stable crude oil prices and rupee) and easing US-China trade tensions. The last leg of the rally was in fact fuelled by FII inflows.

"The benchmark indices, both Nifty and Sensex, are still not showing any sign of slowing down, however, they could see some intermediate pause and that would be healthy," Jayant Manglik, President - Retail Distribution, Religare Broking told Moneycontrol.

Shailendra Kumar, Chief Investment Officer at Narnolia Financial Advisors said the current rally in the market is on the back of expected earnings improvement.

Going forward, FY20 is expected to be the year of earning revival in terms of headline numbers, according to him. Improved flows to emerging market after the US Fed and other central banks toned down their hawkishness also supported the market.

He recommends investors to focus on fundamentally sound stocks and traders to keep a stock-specific approach.