These 17 Nifty50 stocks doubled investor wealth in last 5 years. Do you own any?

Updated : June 21, 2019 03:04 PM IST
While Nifty rose over 50 percent in the last five years, these stocks gained between 105-1600 percent.
Bajaj Finance topped the list with over 1600 percent return during the period.
Bajaj Finserv comes second with 800 percent surge in 5 years followed by Britannia Industries (up 520 percent).

Since 2014, there was a broad-based rally with participation across sectors creating enormous wealth for investors after the Modi government came into power the first time. Despite hiccups like demonetisation, GST, trade war fears, crude price rise, the benchmark index surged in these 5 years.

Bajaj Finance topped the list with over 1600 percent return during the period. Bajaj Finserv comes second with 800 percent surge in 5 years followed by Britannia Industries (up 520 percent), Titan Company (up 292 percent), and Kotak Bank (up 223 percent), among others. 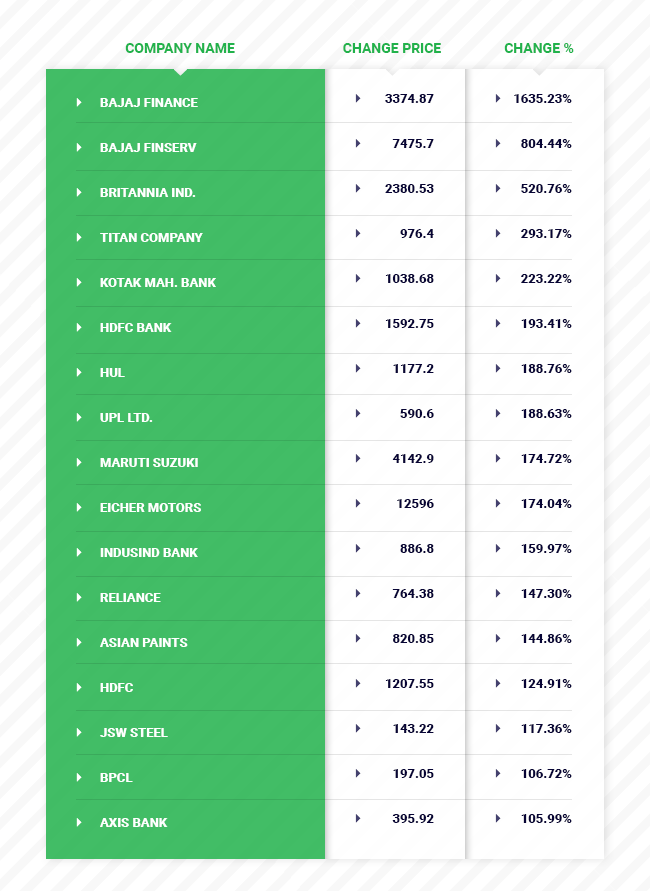 NBFC major Bajaj Finance has given massive returns to investors. The stock has surged 1,635 percent in the last five years. The stock traded around Rs 200 per share in 2014, which has risen to around Rs 3,370 currently. An investment of Rs 1 lakh in the stock would have turned to Rs 34.78 lakh in 2019. For Q4, the firm recorded a strong 57 percent year-on-year (Y-o-Y) growth in net profit at Rs 1,176 crore.

Another such investment is Bajaj Finserv, where a similar investment would have given a return of over 8 lakh.

Britannia also rose over 500 percent in the last 5 years. It has rallied from Rs 457 in June 2014 to Rs 2,830 in June 2019. The stock has, however, lost 9 percent in 2019. Analysts remain bullish on the stock. “Britannia continues to gain market share in its core biscuits category, coupled with a stepped-up focus on building new categories," said Jefferies in a report.

Titan is another multi-bagger Nifty stock. The Tata Group company stock, which traded at Rs 333 per share in 2014, surged over 250 percent, to currently trading at Rs 1297. While analysts remain bullish on the stock, they maintain that expensive valuations may hinder growth. For the March-quarter, the company posted a 4.42 percent year-on-year rise in standalone net profit at Rs 294.58 crore