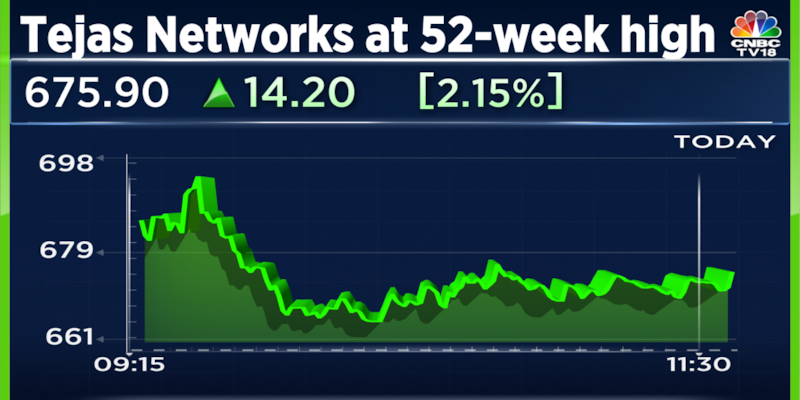 Despite reporting a net loss of Rs 7 crore in the April-June quarter, Tejas Networks is confident of substantial growth in the remaining three quarters of the financial year.

Shares of Tejas Networks, the optical, broadband, and data networking products company in which Tata Sons owns a controlling stake, were at a 52-week high on Friday.
News reports in the Economic Times suggest that Tata Consultancy Services (TCS) and BSNL are close to finalising a deal worth $2 billion that may help the state-run telecom provider launch its 4G services.
The report also states that Tejas Networks is expected to locally manufacture the network equipment for BSNL. CNBC TV-18 has not verified the news and cannot vouch for its authenticity.
Tata Sons acquired a 43.3 percent stake in Tejas Networks for Rs 1,884 crore in July last year to build a networking equipment business ahead of the launch of 5G networks. In addition, it will also buy an additional 26 percent stake through an open offer and shares worth Rs 34 crore from four senior executives of Tejas Networks.
Last night, Tejas Networks announced that it would merge Saankhya Labs and its subsidiary Saankhya Strategic Electronics Pvt. Ltd. with itself. The company acquired 64.4 percent stake in Saankhya in July 2022. Tejas will issue 112 shares of the company for every 100 shares of Saankhya Labs held by its respective shareholders.
"This amalgamation is expected to enhance operational, organizational and financial efficiencies, help achieve economies-of-scale by pooling of resources, drive synergies in revenue, costs and operations, and will help build a stronger base for future growth of the company’s business," the company said in an exchange filing.
Tejas Networks was also awarded an optical network contract worth Rs 298 crore from Power Grid in August.
For the April-June period of the current financial year, Tejas Networks reported a net loss of Rs 7 crore as supply chain constraints prevented the company from shipping adequate systems. As most of its deals were fixed price, the increase in costs of components hurt the company's gross margins as well.
The company has won a few large tenders in the April-June period from the government, which, according to the company, are likely to convert into purchase orders in the quarter ending today. As of June 30, the company's India backlog stood at Rs 986 crore, and the international backlog stood at Rs 172 crore.
Tejas Networks also has cash worth Rs 1,739 crore on its books which it plans to use for organic and inorganic growth.
Shares of Tejas Networks are up nearly 60 percent this year, after tripling in 2021 and gaining 45 percent in 2020.
Check out our in-depth Market Coverage, Business News & get real-time Stock Market Updates on CNBC-TV18. Also, Watch our channels CNBC-TV18, CNBC Awaaz and CNBC Bajar Live on-the-go!