Take Five: Panic over? World markets themes for the week ahead

Take Five: Panic over? World markets themes for the week ahead

Major central banks' efforts to navigate their way back to normal after years of low interest rates and easy money following the 2008 financial crisis have not been without bumps. Central bank independence has been questioned in many countries.

Following are the five big themes likely to dominate thinking of investors and traders in the coming week and the Reuters stories related to them.

1. The I Word
As the US yield curve makes up its mind whether to invert or not, investors seeking reassurance that we are in a Goldilocks era of non-inflationary growth will get to scour two monthly price gauges this week.
On Wednesday, the Labor Department is expected to report that its March Consumer Price Index rose 0.3 percent on the month and 1.8 percent over the year - a reading that would reinforce subdued underlying inflation and validate the Fed's almost about-face after four hikes last year.
CPI - a proxy for overall inflation that factors into cost of living adjustments for Social Security - rose 1.5 percent year to February, the smallest increase since September 2016. The latest reading of the Fed's favourite inflation measure rose 1.8 percent in the year to January, below its 2 percent target.
Fed officials have started alluding to a new economic reality of slowish growth and little upward price pressure. Even as wages creep higher, improved productivity curbs firms' costs.
Minutes of the March Fed policy meeting, to be released on Wednesday, will be cross-checked references to the new "patient" approach and "muted" inflation. The March producer price index, a glimpse of pipeline price pressures, is scheduled for Thursday. 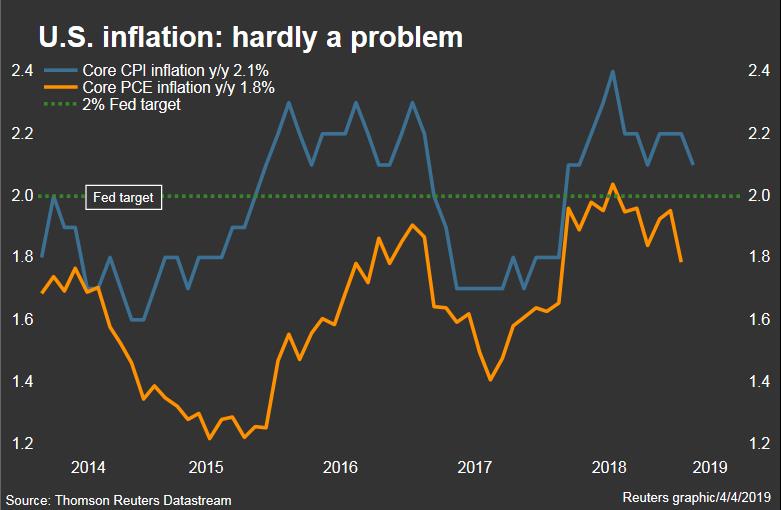 2. Mario To The Rescue
Just a month since the European Central Bank put plans to normalise policy on hold and delayed a rate hike into 2020, further signs of weakness in the economy and a whiff of panic among investors puts the spotlight back on the central bank.
A woeful set of German industrial orders data this week pushed German Bund yields back into negative territory and though a US-China trade deal could be in sight, it looks like difficult times ahead for Europe.
No policy changes are expected at Wednesday's ECB meeting, especially since some board members are travelling to Washington for the International Monetary Fund's spring meetings.
But talk of tiered rates to ease pressure on banks, global recession fears, Brexit, and a sense of panic that has pushed 10-year German bond yields back below zero percent, all suggest ECB chief Mario Draghi's news conference may prove lively.
Investors will also keep an eye out for further details on cheap loans known as the targeted long-term refinancing operations (TLTROs) -- one of the few policy tools left in the kit after the end of QE -- and what the ECB will do to incentivise banks to take it up. 3. Watch Your China
An unexpected recovery in China factory activity surveys offered investors a glimmer of hope the stimulus injected in one of the world's major growth engines may be yielding results.
Trade data due out on Friday could provide the next clue that could help investors regain confidence as they gauge whether the slowdown is bottoming out.
That said, the recovery remains feeble and analysts believe it is still highly-dependent on how the trade negotiations with Washington go.
Markets took some hope from an announcement by US President Donald Trump on Thursday that Washington and Beijing could announce a trade deal within four weeks while Chinese President Xi Jinping was reported as saying progress was being made. But Trump also warned Beijing it would be difficult to allow trade to continue without a pact.
Many believe the Chinese economy may still need more stimulus either way. Looking at the pattern of past decisions by the People's Bank of China, a decision to cut bank reserve requirements may be announced by mid-April, economists say. 4. The Long Goodbye
After British Prime Minister Theresa May's request to the European Council to delay Brexit until up to June 30, focus now shifts to a meeting next week where EU leaders will discuss a proposal to offer Britain a flexible extension of up to a year.
After the British parliament failed to approve a withdrawal agreement, May started talks this week with Labour leader Jeremy Corbyn in the hope of breaking the Brexit deadlock, but markets are not getting too excited about it.
While one-month risk reversals for the pound, a gauge of demand for the British currency in the derivatives market, have rebounded from a 2-1/2 year low hit last month, they still remained far below levels seen earlier this year, indicating overall sentiment remained bearish.
Implied volatility measures also indicated caution with one-month gauges for the pound remaining elevated despite a dip this week compared to the euro and the Japanese yen. 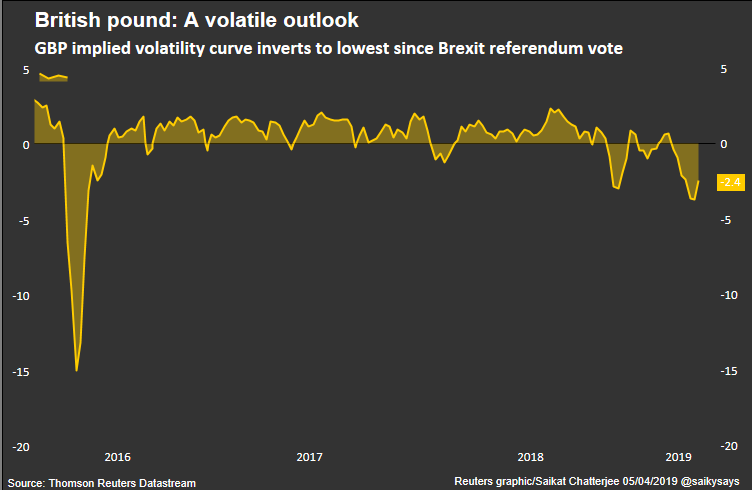 5. Is It Spring Yet?
It is that time of year, when central bank governors, finance ministers, policy makers and investors from around the globe gather in Washington for the spring meeting of the International Monetary Fund and World Bank. A Group of 20 central bankers and finance ministers meeting takes place on the sidelines.
There is no shortage of topics to talk about. Concerns over the health of the global economy amid trade wars and other political uncertainties such as Brexit have sent jitters through markets.
Major central banks' efforts to navigate their way back to normal after years of low interest rates and easy money following the 2008 financial crisis have not been without bumps. Central bank independence has been questioned in many countries.
Speaking in the run up to the gathering of the great and good of policy making and finance, IMF chief Christine Lagarde has called the outlook for growth "precarious" and warned that years of high public debt and low interest rates over the past decade have left many countries with limited room to act when the next downturn arrives.