With Gujarat Narmada Valley Fertilizers and Chemicals Ltd (GNFC) and UPL Ltd reporting robust numbers for the quarter ended March 2022, market experts believe there are some decent investment opportunities in the chemicals and fertiliser space.

Market experts believe there are some decent investment opportunities in the chemicals and fertiliser space after UPL Ltd and Gujarat Narmada Valley Fertilizers and Chemicals Ltd (GNFC) posted robust numbers for the March quarter.

They say the markets were not expecting a better-than-estimated show by the chemical and fertiliser players, and the numbers were not fully factored in. Thus, there was some bit of a surprise, which was visible from the upward movement in the firms’ stocks. The demand outlook by both – GNFC and UPL – was also encouraging, boosting investor sentiment for the entire sector.
GNFC, which says it gets 70 percent revenue from chemicals and 30 percent from fertilisers, reported a 60 percent year-on-year jump in consolidated revenue to Rs 2,771.71 crore, while net profit more than doubled year-on-year to Rs 643.26 crore in the quarter ended March 2022. Reacting to this, shares of GNFC surged about 12 percent on BSE on May 10. GNFC stock has gained after two days of consecutive losses and touched an intraday high of Rs 846.3, up 12 percent on BSE today. (Source: BSE website)
“Demand from major end-user industries, namely automotive, sealants, adhesives, agrochemicals, pharmaceuticals, paints and coatings, appears to be strong, which has pushed product prices in the chemicals business higher,” said Awanish Chandra, head of institutional equities, SMIFS.
Further, the rise in prices of Toluene Di-Isocyanate (TDI), which contributes 30-35 percent to the company’s EBITDA in the chemicals business, helped boost GNFC profit. “The company commands about 40 percent market share in TDI space in India,” Chandra said.
In the fertiliser space, raw material procurement might be a challenge owing to freight and global supply-chain issues since GNFC imports raw materials like rock phosphate from countries such as Russia, Indonesia, and Morocco. “But considering the rise in prices of various complex fertilisers, a decent profit has been generated from the finished products,” said Aditya Khetan, chemical analyst, SMIFS.
Pankaj Joshi, managing director at GNFC, told CNBC-TV18 that the timely release of fertiliser subsidy by the government helped agrochemical firms.
UPL also reported higher-than-expected profit after tax and revenue on a consolidated basis. The agrochemicals company’s scrip was up about 2 percent on BSE on May 10. 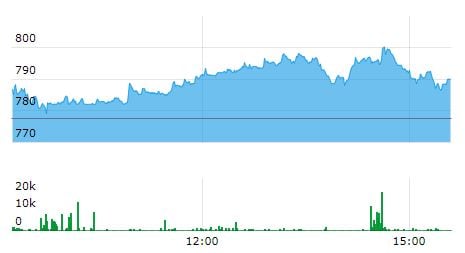 UPL's stock has gained after four days of consecutive losses and has touched an intraday high of Rs 800.35, up 3 percent on BSE today. (Source: BSE website)
“There are mindless opportunities in the agrochemicals space,” said Himanshu Binani, research analyst at Prabhudas Lilladher. He believes UPL, Sumitomo Chemical, and Rallis India are better placed for one to take advantage of the uptrend in agrochemical stocks.
According to Binani, earnings optimism for agrochemical players might not fade away anytime soon, led by remunerative crop prices – provided the monsoon is normal.
UPL also said that the demand outlook continues to be constructively supported by strong agri-commodity prices. After the results, CEO Jai Shroff told CNBC-TV18 that the company chose to prudently invest despite challenges.
Chemical and fertiliser stocks such as UPL, Tata Chemicals, Sumitomo Chemical, Deepak Fertilizers, and GNFC have risen 7-88 percent in the past year.
Kkunal Parar, vice-president of research at Choice Broking, said GNFC looks good on the chart and a 9-20 percent upmove in the stock is highly likely from the current level. Besides GNFC, Tata Chemicals and Sumitomo Chemicals could witness a 14 percent spurt in the stock price, he added.
Catch up on all LIVE stock market updates here.
Check out our in-depth Market Coverage, Business News & get real-time Stock Market Updates on CNBC-TV18. Also, Watch our channels CNBC-TV18, CNBC Awaaz and CNBC Bajar Live on-the-go!