India's top sugar stocks may still be in a sweet spot

India's top sugar stocks may still be in a sweet spot A rally in sugar stocks is showing no sign of slowing down. While Renuka Sugars shares have nearly tripled investors' money in one year, stocks such as Triveni Engineering and Mawana Sugars have given a more than 2x return. Should you move to take a slice of this sweet spot in the sugar story?

A majority of sugar stocks have faced some selling pressure after rewarding investors generously for the past few months. The likes of Shree Renuka, Triveni, Mawana, and Rana have at least doubled investors' money in the past year and counting. Analysts believe any dip now can be utilised as an opportunity to buy into these names.

They say the government's ethanol push — which has led to stronger demand for the distillery business — is the primary reason behind the industry hitting a sweet spot, besides reducing supply from Brazil — the world's largest sugar exporter.
Yet, some are worried about elevated valuations, which they feel make it wiser to wait for some cooling off before a fresh entry. Shree Renuka Sugars shares have showered investors with almost a three-fold return in the past year. 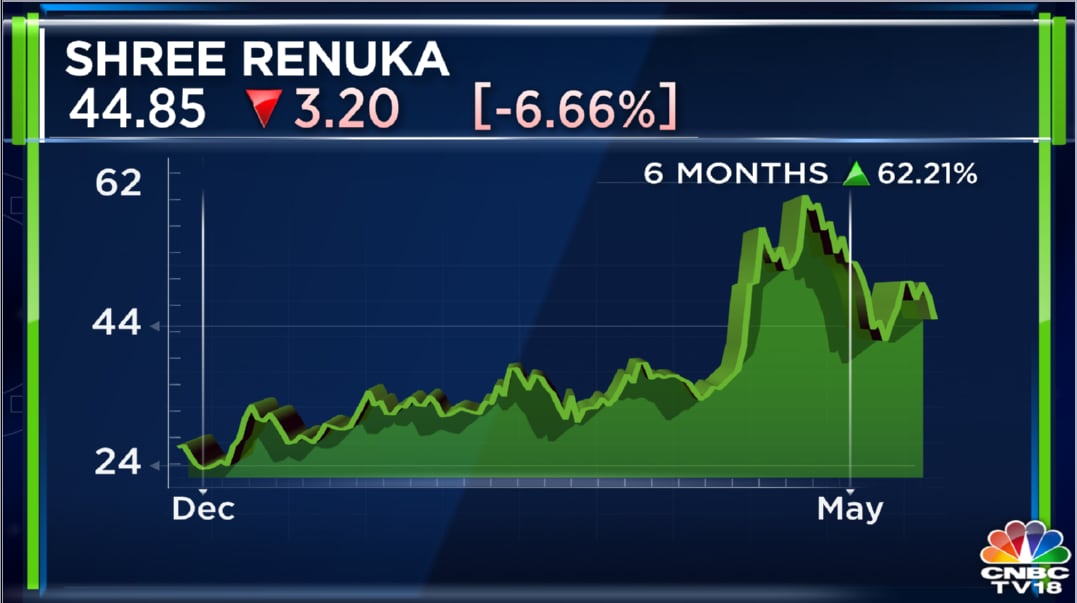 Mawana is the second-best stock in the basket in the 12-month period. A sweet spot
Market expert Mehraboon J Irani believes at least some of the manufacturers are "in a great sweet spot" with not just global raw sugar futures going up but also the domestic story gaining momentum. "Like most of the market, sugar stocks have also become over-owned, and a healthy correction can lead to a buying opportunity," he told CNBC-TV18.
He is not the only one eyeing a dip in sugar stocks.
AK Prabhakar, head of research at IDBI Capital, believes it is best for investors to wait for a correction of 10-12 percent to make an entry in sugar shares. "Sugar stocks are mainly riding on the back of the government's ethanol policy while exports are also helping the business," he told CNBCTV18.com.
So, why the dip in stocks?
The government said on Tuesday it would regulate sugar exports from June 1 to keep domestic rates in check and maintain sufficient stocks.
Sugar stocks could come back in favour. "The recent correction, fuelled by fears of a global food shortage and consequent regulatory risks, is temporary," said Deepak Jasani, head of retail research at HDFC Securities.
However, the broader uprun in sugar stocks has been powered by the flexibility provided to the mills to transform excess sugar into an opportunity to produce ethanol, he said.
India plans to increase the proportion of ethanol in petrol to 20 percent with effect from April 2023, as part of its National Biofuel Policy — aimed at reducing the country's dependence on oil imports and moving towards greener fuels.
"To increase the quantum of blending, the pan-India ethanol production capacity will have to increase from the current 700 crore litres to 1,500 crore litres, ultimately benefiting the sugar industry," Ravi Singh, vice-president and head of research at ShareIndia, told CNBCTV18.com. He has a positive outlook on the overall sugar space for 2022.
A win-win situation for the industry
India is the largest consumer of sugar globally, and improving global demand has brought mills into high gear.
In the October-April period — the first seven months of the sugar marketing season — exports of the sweetener grew 64 percent to 71 lakh tonnes on the back of a rise in global demand, according to industry body Indian Sugar Mills Association (ISMA).
It expects more than 90 lakh tonnes of exports in the current marketing year, which ends in September, as against 71.9 lakh tonnes in the previous year.
Sugar consumption has risen about 5 percent in the seven months on a year-on-year basis — higher than the historical average — mainly due to the rising summer mercury, Centrum Broking said in a note citing data from ISMA.
Sugar manufacturers are also hopeful of another bumper harvest year with the prediction of a normal monsoon.
Time to add some sugar to your portfolio?
Prabhakar and Singh have Balrampur Chini among their top picks from the space.
Prabhakar's other preferred picks include:
Besides Balrampur, Singh finds Shree Renuka and Dhampur Sugar attractive from a long-term investment perspective.
Check out our in-depth Market Coverage, Business News & get real-time Stock Market Updates on CNBC-TV18. Also, Watch our channels CNBC-TV18, CNBC Awaaz and CNBC Bajar Live on-the-go!