Indian equity indices reduced losses at close on Wednesday led by recovery in the rupee and late buying in pharma, auto, metal stocks, in particular. Earlier, indices traded sharply lower as the Indian rupee weakened to fresh record low against the dollar. The BSE Sensex ended above the 38,000 mark, but the NSE Nifty 50 ended below 11,500. Here are the main highlights from the stock markets today:

The BSE Sensex ended nearly 140 points lower at 38,018, while the NSE Nifty 50 settled at 11,477, down by 44 points, or 0.38 percent. Indices reduced losses ahead of the closing trade led by a recovery in the Indian rupee against the dollar and buying in metal, pharma , auto and IT stocks. Banks too recouped losses but ended in the red overall. Yes Bank, Vedanta, Hindalco, Wipro, Tata Motors, Adani Ports, Sun Pharma surged by up to nearly 3 percent. Bharti Infratel, Idea Cellular, Hindustan Unilever, Zee Entertainment, Titan, Kotak Mahindra Bank, Reliance Industries, HDFC declined by up to 4.47 percent. Midcaps too ended off from the day's low recovering nearly 300 points. Nifty MidCap declined by 0.42 percent, while the BSE MidCap lost 0.61 percent.

Shares of NR Agarwal Industries surged 12 percent to hit an over four month high of Rs 522.90 aided by talk of strong growth in profits and sales in July-September. The company's July-September results are likely to be exceptionally good as the company is seen benefiting from strong demand for paper and packaged products in both domestic and international market. At 3.15 pm, shares of NR Agarwal Industries traded at Rs 491.55, up 4.24 percent. So far in 2018, the stock has risen 15.4%. (Cogencis) 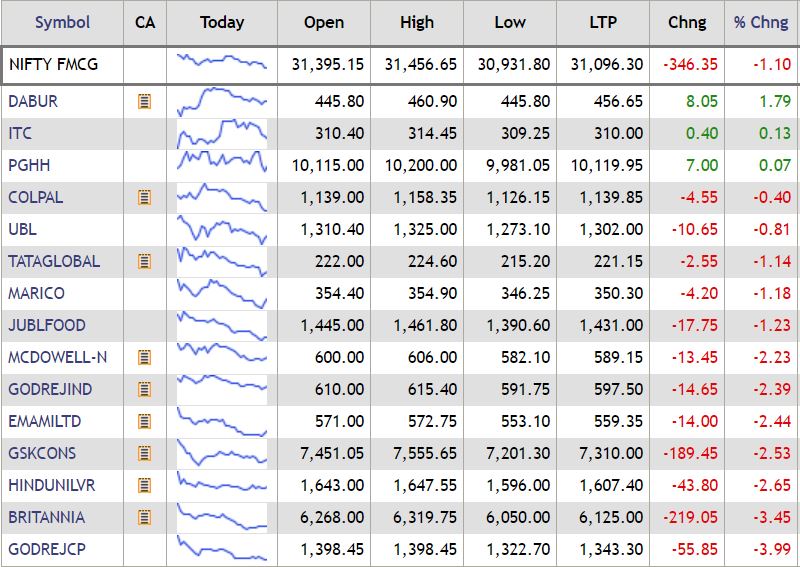 Cyient shares hit a month's high of Rs 774.40, building on yesterday's gains as the company's JV with Israel-based BlueBird Aero Systems, has received an order from the Indian Army to supply mini unmanned aerial vehicle systems. Shares traded at Rs 769.10, up by 5.32 percent, adding Rs 38.85 in value. Meanwhile, indices recouped some losses with the BSE Sensex lower by 235 points to trade at 37,924.

Shares of Sical Logistics ltd jumped over 17 percent on huge volumes. The microcap stock traded at Rs 197.20, adding Rs 29.15 in value, surging by 17.35 percent. The stock opened at Rs 171.50 and has outperformed the sector by nearly 15 percent. It is gaining for the last 5 days and has risen over 18 percent in the period.

Indian shares extended their losses and fell sharply on Wednesday afternoon ahead of the last hour of trade, tracking the Indian rupee which fell to a fresh record low at 71.96 against the dollar, nearing the 72 mark. Consumer and bank stocks particularly saw sustained selling along with other sectors except pharma and to some extent IT shares. At 2.10 pm, the BSE Sensex traded lower by 356 points, or 0.93 percent, to trade at 37,802.13. The NSE Nifty 50 hovered just above 11,400 mark, trading at 11,401.75, lower by 118 points, or over a percent.

Jefferies initiates coverage of Finolex Cables Ltd with a “buy” rating and price target of Rs 690, Havells India Ltd with “hold” and a price target of Rs 745 and V Guard Industries Ltd with a “buy” and price target of Rs 260. Brokerage bullish on Indian electricals companies, says sector to benefit from nationwide Goods and Services Tax (GST) and required billing mechanism called E-Way Bill. Key emerging trend among electricals is rapid diversification into durables and appliances, which helps de-risk their business models and optimize product mix, says Jefferies. Price differential between branded and unbranded converges, foresee accelerated demand transition to organized players, it added. Demand shift to organized segment, government’s thrust on housing and rural electrification, new product launches, and deeper penetration in rural regions are among key catalysts for electricals companies, Jefferies adds. Shares of Finolex, Havells, V Guard were down between 1.46 percent and 3.28 percent, while broader market was down on a weaker rupee. Eight out of 9 analysts covering Finolex rate the stock a “buy”, 11 of 19 have a “buy” rating on V Guard and 27 of 37 rate Havells “buy.” (Reuters)

Shares of Havells India declined by 3.29 percent to trade at Rs 646.50, losing Rs 22.95 in value,  on concerns that company's margins may reduce after rival Syska Group slashed prices of light-emitting diode products by 10-15 percent recently. After opening at Rs 670, the scrip has ranged between Rs 672 and Rs 646.

Meanwhile, equity indices sharply extended losses as the Indian rupee weakned further against the dollar. The BSE Sensex has slipped over 292 points or by 0.77 percent to 37,865.59. The NSE Nifty 50 too fell by 103 points or 0.90 percent to 11,417.15. The rupee so far has hit a record low of 71.96 against the dollar in intra-day trade, nearing 72/$ mark. Midcaps are also under severe pressure with the Nifty MidCap lower by 1.7 percent and the BSE MidCap down by 1.65 percent. Top laggards included Tata Motors, Kotak Mahindra Bank, Hindustan Unilever, Tata Steel, Reliance , Idea Cellular, Bharti Infratel, Titan, Zee Entertainment, falling by up to 4.25 percent. Top gainers were Wipro, Yes Bank, Bajaj Auto, Tech Mahindra, ITC, Bajaj Auto, Sun Pharma, rising by up to 1.16 percent.