Indian equity market have ended Monday's trading with sharp losses, after a green start as investor sentiment turned bearish with the street factoring in the NBFC and housing financial companies’ exposure to the IL&FS. A surge in crude oil prices and persisting volatility in the Indian rupee added to sustained selling. Both indexes ended near two-month lows after an extremely choppy session. Except IT and energy, all sectors ended with losses. Here are the main highlights from the stock markets today:

Choppy market: Step back and look at the big picture, says Anuj Singhal

India's benchmark stock market index slumped more than 500 points on Monday, with selling pressure seen across major key sectoral indices. After such a sharp plunge, investors are left wondering what's more in the offing for the index... Now, this market has given up exact half of the rally it has since August lows. Can it give up 66 percent? It’s entirely possible, says CNBCTV18's Anuj Singhal. Click here to read.

Shares of Indian carriers SpiceJet Ltd, Jet Airways (India) Ltd and InterGlobe Aviation Ltd , which owns IndiGo, fell as much as 4.2 percent-7.9 percent. Brent crude rises over 2 percent as US sanctions restrict Iranian crude exports, tightening global supply. Domestic passenger growth in August has been the lowest since May at 17.2 percent, according to data released by the Directorate General of Civil Aviation. Jet hits its lowest in nearly four years, while SpiceJet falls to its weakest since March 2017. Jet had shed 72.4 percent this year as of Friday’s close amid financial woes. (Reuters)

Shares of state-owned oil refiners tanked after the Brent crude oil futures rose above the $80 per barrel mark to a four-year high on the Intercontinental Exchange, raising fears of government intervention in price determination. Global crude oil prices surged nearly 2 percent on fears of a supply crunch after the Opec said it would only increase output if demand rose and ahead of US sanctions on oil exports from Iran. At 2.40 pm, shares of Bharat Petroleum Corp, Hindustan Petroleum Corp, and Indian Oil Corp were down 1.7-4.5 percent.

Sources tell @kritika_saxena1 that select bids for @jetairways' stake in Jet Privilege have come in below expected valuation; the airline is yet to respond to CNBC-TV18's query pic.twitter.com/Xl5EMfFtLf

Shares of Central Bank of India, HDFC and State Bank of India tanked given their significant exposure in crisis-hit Infrastructure Leasing & Financial Services. As per recent reports, IL&FS group was unable to service its obligations on interest payments on non-convertible debentures that were due on Friday, sparking more fears on the company's ability to repay its over 1-trillion-rupee debt. The sell off in the banks was exacerbated by the fact that the company's debt repayments on other securities is scheduled for later this week. Central Bank of India, Housing Development and Finance Corp, and State Bank of India have 7.67 percent, 9.02 percent, and 6.42 percent stake in the company, respectively. Today, shares of Central Bank fell nearly 20 percent to hit their over nine-year low of Rs 42.60 and those of HDFC fell over 5 percent to their six-month low of Rs 1,741. (Cogencis) 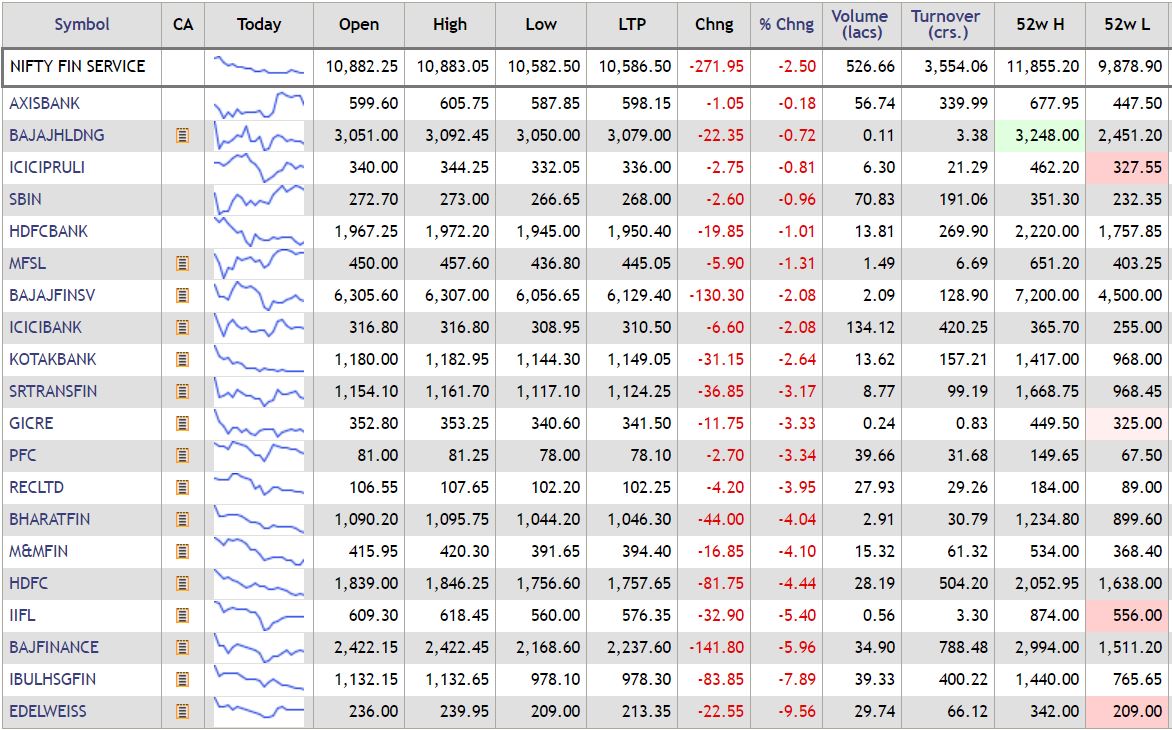 #CNBCTV18Market | Large cap IT cos gain in trade amid a falling #rupee pic.twitter.com/lKnWwu1zI9

Shares of Infosys rose nearly 2 percent today after a media report said the RBI has shortlisted five information technology companies, including the company, for implementation of a centralised information and management system for seamless data collection and validations. The central bank had invited of expression of interest in July for identification of solution provider for implementation of CIMS by overhauling the Data Warehouse of the apex bank. Capgemini Technology Services India, IBM India, Infosys, L&T Infotech and Tata Consultancy Services are the other vendors who have been shortlisted for the project. At 10.03 am, shares of Infosys traded up 2.2 percent at Rs 720.90. (Cogencis)

Nifty Bank is again under pressure on Monday with the sectoral index slipping over 1 percent, or by 295 points, as crude oil prices surge and the Indian rupee weakens against the dollar. As many as 11 shares declined on the index with IDFC Bank, Federal Bank, RBL Bank, Kotak Bank, IndusInd Bank declining by up to 3.58 percent. Yes Bank traded higher by a percent after initial sell-off. Meanwhile, benchmark indexes continued to trade under pressure. The NSE Nifty50 dipped to 11,080, lower by 63.10 points, or by 0.57 percent, while the BSE Sensex declined to 36,649.78, sharply lower by 191.82 points, or 0.52 percent at 10.05 am.

DHFL to CNBC-TV18 says challenge with another NBFC in the system resulted in the mayhem on Friday pic.twitter.com/KzBi3bdE3a

#Rupee opens lower at 72.47 Vs Friday's close of 72.20 against the US Dollar pic.twitter.com/HgvCPBHDPU

Prime Minister Narendra Modi will inaugurate the Pakyong airport in Sikkim on September 24, officials said on Friday. The greenfield airport will put Sikkim on the aviation map of the country.

The resignations of Ramesh Bawa, CMD of IL&FS Financial Services, and Vibhav Kapoor, non-executive director, along with three other independent directors aren’t an everyday event. The questions it raises are:

a) Have these directors jumped off a sinking ship?

b) Or, have they stepped down as responsible professionals who are taking moral responsibility?

Either way, it is not a development that infuses confidence in the institution or its parent.

Read Sonal Sachdev's detailed analysis on the root cause of IL&FS’ troubles.

Here's what Credit Suisse has to say about Varroc Engineering pic.twitter.com/DwkDfdUvnN