Stock Market Highlights: Indian indices ended higher led by gains in pharma and IT stocks as a close US presidential election pushed the dollar higher. Meanwhile gains in heavyweights Reliance, Kotak Bank and HDFC Bank further supported the benchmarks. The Sensex ended 355 points higher at 40,616 while the Nifty rose 95 points to settle at 11,908.

- Market Closes In The Green As Investors Await US Election Results

Indian indices ended higher led by gains in pharma and IT stocks as a close US presidential election pushed the dollar higher. Meanwhile gains in heavyweights Reliance, Kotak Bank and HDFC Bank further supported the benchmarks. The Sensex ended 355 points higher at 40,616 while the Nifty rose 95 points to settle at 11,908. Broader markets were mixed with the Nifty Midcap up 0.5 percent and Nifty Smallcap down 0.24 percent. IndusInd Bank, Sun Pharma, RIL, Divi's Labs and Cipla were the top gainers on the Nifty50 index while UPL, Axis Bank, HDFC, ICICI Bank and Hindalco led the losses. Among sectors, Nifty Pahrma surged over 2 percent while Nifty IT jumped 1.8 percent. Nifty Auto and Nifty FMCG were also in the green, however, Nifty Bank, Nifty Fin Services and Nifty Metal ended in the red for the day.

State Bank of India reported its Q2 earnings. The net interest income (NII) is up about 14.6 percent at Rs 28,182 crore on year-on-year (YoY) basis. Profit is also higher than street estimates, at Rs 4,574 crore. The gross NPA came in at 5.28 percent compared to 5.44 percent quarter-on-quarter (QoQ). The net NPA saw an improvement to 1.59 percent as compared to 1.86 percent QoQ. Lalitabh Shrivastawa of Sharekhan said that the results are in-line with expectations, except for the slight miss on the asset quality numbers. He said his firm has a buy rating on the stock. Darpin Shah of HDFC Securities too has a buy rating on the stock, and said any further action would depend on the management commentary. Watch video for more

US Elections 2020: Dow and S&P Futures in wait and watch mode; Nasdaq rallies

Even the markets, which generally seem to get a whiff of which way the wind is blowing in an election, are holding tight in the closely contested Trump versus Biden race to the White House. The “Blue Wave” expectations faded quickly after Florida tipped to President Trump, which saw NASDAQ futures hit circuit breakers on the upside as the recent value rotation unwound. USD has traded higher and treasuries have rallied hard.

The moves have since petered out slightly thanks to a number of outlets calling for Arizona to tip to Joe Biden; this complicates the route to a Trump re-election. Betting odds have also impacted price action heavily at points, especially when it moved aggressively for Trump amid results. Right now however, odds put both candidates almost neck and neck, with Biden firmly back in the running after Arizona calls. Watch this video for more details

Gold fell 1 percent on a stronger dollar on Wednesday after the latest voting tallies from the U.S. presidential election showed a tight race, with President Donald Trump winning in Florida and leading in a few other battleground states. Spot gold fell 0.9 percent to $1,890.99 per ounce by 0750 GMT. U.S. gold futures dropped 1 percent to $1,891.30 per ounce. Trump won the battleground states of Florida, Ohio and Texas, while Democratic rival Joe Biden said he was on track to winning the White House by taking three key Rust Belt states.

The Bombay High Court on Wednesday rejected the bail pleas filed by Kapil and Dheeraj Wadhawan, promoters of Dewan Housing Finance Ltd (DHFL), in the Yes Bank fraud case. A single bench presided over by Justice S V Kotwal had reserved his order on their bail pleas on October 23. The Wadhawan brothers had approached the high court, seeking default bail, claiming that the Central Bureau of Investigation (CBI), the prosecuting agency in the case, had not complied with the procedural requirements under the Code of Criminal Procedure (CrPC) while filing the chargesheet before the special CBI court in the city. Senior advocate Amit Desai, who appeared for the Wadhawans, had argued that the CBI had not complied with the procedure under Section 173 CrPC while submitting its investigation report before the special magistrate. More here

Buy Shriram Transport Finance at current levels for the target of Rs 820 and keeping a stop loss at Rs 740.

Tata Vs Mistry Case | Supreme Court adjourns hearing in the case. Next date of hearing is not given. 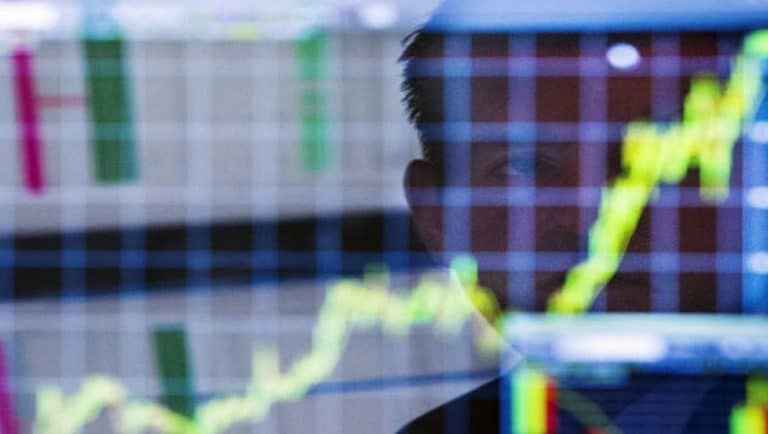 The issue will open for subscription on November 9 and will close on November 11. The IPO opens for a day for anchor investors on November 6.

Investors can bid for a minimum of 10 equity shares and in multiples of 10 shares thereafter.

The IPO of the company, promoted by Fosun Singapore and Shanghai Fosun Pharma, consists of a fresh issue of Rs 1,250 crore and an offer for sale of 3,48,63,635 equity shares by promoter and other selling shareholders. Read more here.

It is also seeking two cargoes for delivery into Dabhol in India over Jan. 7 to 15 and over Feb. 4 to 10 on a delivered ex-ship (DES) basis, they added. The tender closes on Nov. 5.

The Indian importer has 20-year deals to buy 5.8 million tonnes a year of US LNG, split between Dominion Energy’s Cove Point plant and Cheniere Energy’s Sabine Pass site in Louisiana.

Shares of CARE Ratings were locked in 20 percent upper circuit at Rs 365 per share on Wednesday after the company announced their September quarter results. The company posted a nearly four-fold jump in its consolidated net profit at Rs 35.84 crore in Q2 on a quarter-on-quarter basis from Rs 9.7 crore in Q1. However, net profit for the quarter was marginally lower on a year-on-year basis. The revenue also recovered in Q2, rising over 100 percent in Q2 at Rs 75.88 crore from Rs 37.38 crore in the previous quarter. The sales fell sharply in the June quarter to half the normal levels but the September quarter witnessed a bounce back to pre-COVID levels.
Share:

US Elections 2020: How the results will affect India, emerging markets

What will the outcome of the 2020 US elections mean for developed markets, emerging markets, and India in particular? In an interview to CNBC-TV18, Rana Gupta, MD of Manulife Investment Management said that a Trump victory could result in a lower fiscal stimulus for the US economy than what the market is expecting.

“This election is important in the sense that if we get a Democratic President and Democratic Senate, the probability of a higher fiscal stimulus will be higher. We do not know how the race will pan out, but I think the Senate race is far more important in terms of what kind of policy stimulus is going to come,” he said. He further added that if there is a fiscal stimulus of USD 2 trillion or higher in the US, then growth oriented sectors like industrials, materials would do well. Watch Video for more

Whether Biden wins or Trump, US and China preferred markets: Bank Julius Baer

“Our two preferred markets are the US and China and equities. That will remain the case regardless of the outcome of this (US Presidential) election,” Mark Matthews of Bank Julius Baer said in an interview with CNBC-TV18. He was part of a panel discussion on the US elections and its likely impact on global markets. Gary Schlossberg, Global Strategist at Wells Fargo Investment Institute, and Jim McCafferty, Global Markets Research at Nomura were also part of the discussion.

“We were always neutral on India at least for the last two years. The decline in coronavirus and the opening of states and the better numbers like auto numbers are all constructive for the Indian market, we don’t dislike it, we just prefer China,” Matthews added. Watch video for more 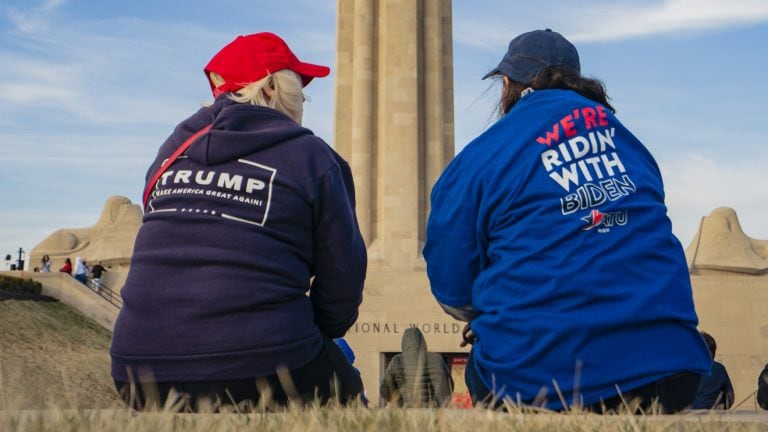 Catch all live updates from US elections here

IT stocks rose on Wednesday as a close US presidential election pushed the dollar higher. Early results in the US presidential election showed a very tight race between incumbent Donald Trump and his Democratic rival Joe Biden, prompting a jump in the dollar. Former vice president and Democratic presidential candidate Joe Biden has maintained his lead mid-way through the counting of votes, as Republican incumbent Donald Trump appeared to be fast catching up. The Nifty IT index rose over 2.5 percent with all the constituents trading positive. L&T Infotech, Wipro, Infosys, and TCS rose the most, up between 2 percent and 3.5 percent. Mphasis, Tech Mahindra, Mindtree, Coforge, and HCL Tech were also up 1-2 percent.
Share:

One has to be a little careful on buying into IT, said Nilesh Shah, MD and CEO of Envision Capital in an interview with CNBC-TV18. “Purely from a fundamental perspective, we have seen the best of margins for the large cap IT and we have seen probably amongst the best of P/E multiples for the IT stocks,” he said.

“One has to be a little careful on buying into IT. However, if there is some kind of correction down the line, I think one needs to revisit the secular growth story of IT and be more focused on that and maybe then again there is a buying opportunity there but for now, one has to be careful on the large cap IT names,” he said. Watch Video for more

The share price of Sun Pharmaceuticals climbed over 5 percent on Wednesday after the company reported a healthy set of September quarter earnings. The company's consolidated net profit jumped 70 percent YoY to Rs 1,812.79 crore. The stock gained as much as 5.33 percent to Rs 511.50 per share on the NSE. The surge in net profit was driven by operating performance and tax credit. However, the forex loss of Rs 116.4 crore limited some growth. More here
Share:

Services #PMI rises above 50 for the 1st time since February and Composite PMI jumps to a 9-year high of 58 in October#Economy pic.twitter.com/1mo2PRcnTb

PVR shares jump over 7% on reduction of losses in Q2

Shares of PVR rose over 7 percent on Wednesday after the multiplex chain said that it has reduced losses in Q2 despite nil revenue from the core movie exhibition business. The company managed to get rent waivers from most landlords, the company’s CFO Nitin Sood said in an interview to CNBC-TV18. He further said that they have brought down fixed cost down by almost 75-80 percent. Meanwhile, for the September quarter, the company reported a consolidated net loss of Rs 184.06 crore versus a net profit of Rs 47.67 crore in the year ago quarter.
Share:

Multiplex chain PVR managed to reduce losses in the second quarter despite nil revenues from the core movie exhibition business with the exception of one property in Colombo. The company managed to get rent waivers from most landlords, the company’s CFO Nitin Sood said in an interview to CNBC-TV18. “The big focus for us right now as revenues have been nil is to really reduce our fixed cost and we have managed to do that,” he said. Watch video for more

Sun Pharma’s 2QFY21 core PBT beat our estimate by 28% driven by healthy revenue growth and cost control. Global specialty product sales rebounded 38% QoQ to $108 million with sales of key products Ilymuya, Cequa and Odomzo back at pre-Covid-19 levels. We raise our FY21 EPS estimate 39% on back of its big beat 2QFY21. With key products gaining traction and the majority of costs incurred, we remain confident in the ramp-up of its specialty business in the coming years. A strong base business coupled with success in specialty products should drive a rerating, in our view. We reiterate our BUY rating with an unchanged target price of Rs 710.

Rupee Opens | The Indian rupee opened at a fresh 2-month low at 74.78 per US dollar. 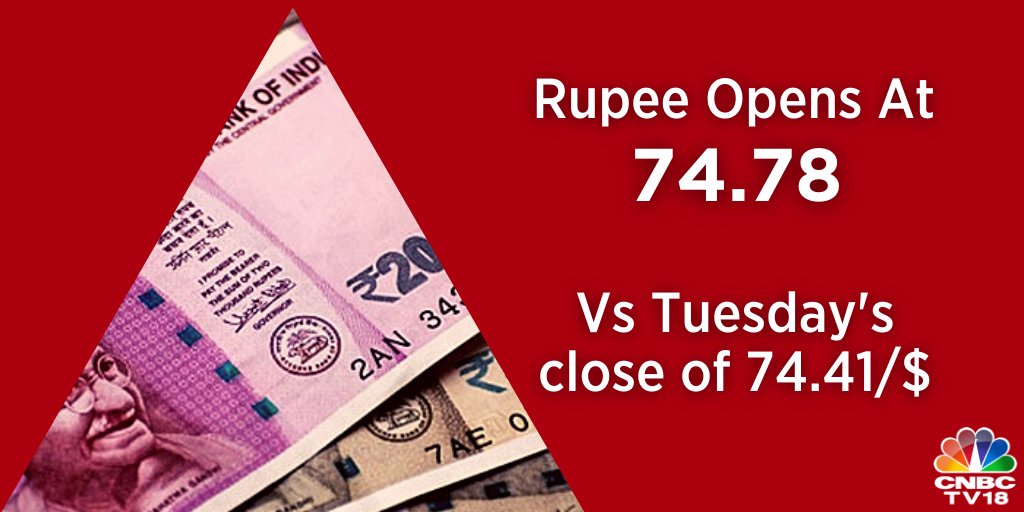