Equity indexes ended lower on Wednesday, sharply dipping ahead of the closing trade amid sustained selling pressure in all major sectors, particularly largecap stocks like Reliance and HDFC twins. The BSE Sensex ended 173 points lower or by 0.45 percent, at 38,723. The NSE Nifty 50 slipped below 11,700 mark, settling at 11,692, lower by 46 points, or 0.40 percent. Reliance Industries, Infosys, HDFC Bank, IndusInd Bank, Maruti Suzuki India, Coal India, HDFC were among top laggards, while SBI, ITC, ONGC, Kotak Bank, Tata Steel batted for the bulls. BSE MidCap gained almost half a percent, while LargeCap declined by 0.27 percent. Here are the major highlights from the markets today:

Equity indexes ended lower on Wednesday, sharply dipping ahead of the closing trade amid sustained selling pressure in all major sectors, particularly largecap stocks like Reliance and HDFC twins. The BSE Sensex ended 173 points lower or by 0.45 percent, at 38,723. The NSE Nifty 50 slipped below 11,700 mark, settling at 11,692, lower by 46 points, or 0.40 percent. Reliance Industries, Infosys, HDFC Bank, IndusInd Bank, Maruti Suzuki India, Coal India, HDFC were among top laggards, while SBI, ITC, ONGC, Kotak Bank, Tata Steel batted for the bulls. BSE MidCap gained almost half a percent, while LargeCap declined by 0.27 percent. Only 6 out of 19 sectorlal indices ended in the positive zone on BSE. Metal and REalty gained over a percent each. Maximum decline was seen in Energy, Telecom, Teck and IT. Nifty Bank ended lower, dragged by weakness in private sector banks, especially HDFC Bank, while PSU Bank surged 1.61 percent. Metal and Realty also gained on the NSE index.

Sharp decline was seen in Reliance Industries' shares ahead of the closing trade on Tuesday. The RIL scrip dipped 1.95 percent to trade at Rs 1292.50, dragging the BSE frontline index lower by over 200 points. RIL stock had opened at Rs 1319 and touched a fresh high of Rs 1328.75. Along with HDFC twins, RIL was the top drag on index. Other major laggards toward the close were Coal India, Power Grid, Yes Bank, NTPC, IndusInd Bank, Asian Paints, Infosys, Vedatna, Axis Bank, Maruti Suzuki. SBI, ONGC, Tata Steel, ICICI Bank, Tata Motors, Wipro, ITC batted for the bulls among others, rising by up to 1.56 percent.

Shares of aviation companies fell sharply as the rupee's relentless fall against the US dollar escalated fears that these companies may have to brace for another quarter of inflated input costs. A depreciating rupee is negative for airline companies as jet fuel is imported, while some companies like Jet Airways India face high dollar-denominated costs. Jet fuel accounts for nearly 40 percent of an airline carrier's total expenditure in a year. Shares of InterGlobe Aviation were down by 4.64 percent, SpiceJet lower at 2.74 percent and Jet Airways slipping by 0.61 percent at 2.58 pm on the BSE. (Cogencis)

The volume of trade in the shares of JSW Steel hit an over five-year high of 30 million shares, as the company is set to become a part of Nifty 50 index from September 28. The stock rose nearly 12 percent today, hitting its lifetime high of Rs 408.70. At 1.55 pm, shares of the company were up 10.3 percent at Rs 403.85. The steel company's market capitalisation was at Rs 978.73 million. (Cogencis)

Shares of kitchen appliance maker TTK Prestige Ltd jumped as much as 7 percent to Rs 6,888.8, post their biggest intraday percent gain since January 17. CLSA has raised the stock’s price target to Rs 7,725 from Rs 7,010, and maintains “buy.” Brokerage sees company as a play on “improving rural consumption and as a beneficiary of govt spending ahead of the elections” (India’s general election are due to be held in 2019.) Company to benefit from the Indian government’s ‘Ujjwala’ scheme which provides LPG connections to families below-poverty-line; leading to growth for stoves and cookers, says CLSA. TTK’s entry into cleaning solutions and recent export orders should contribute to incremental growth, CLSA adds. More than 10,831 shares changed hands, compared with 30-day average of 11,397 shares. Four of 11 brokerages rate the stock “buy” or higher, four “hold” and three “sell” or lower; their median price target is Rs 6,346.50. Shares of TTK Presitge traded at Rs 6,954.10, rising by 7.69 percent at 1.46 pm on the BSE, adding Rs 496.50 in value to the stock. The BSE benchmark index, meanwhile, trades lower by nearly 70 points, or 0.18 percent, to trade at 38,827. (Reuters)

Shares of Cadila Healthcare fell nearly 3 percent after the company said the US FDA has issued five observations to its arm Liva Healthcare's unit in Vadodara, Gujarat. The audit was a pre-approval inspection for a specific product for which the company's arm has sought the US FDA's approval. The Vadodara unit currently does not export any product to the US. Shares of Cadila were down 2.32 percent at Rs 387.25 at 2.33 pm. (Cogencis) 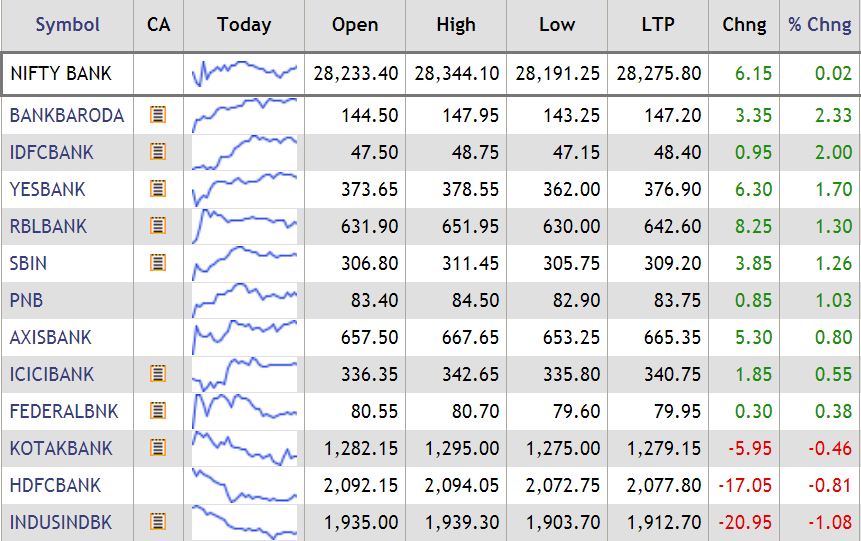 Shares of agrochemicals maker UPL Ltd gain as much as 3.65 percent to Rs 678, highest since June 19. The stock breaks above a resistance at Rs 663.55, the 23.6 percent Fibonacci projection level of the uptrend from February 12, 2016 low to August 1, 2017 high. Breakout suggests the 23.6 percent level will now act as a support, while stock may move towards the next resistance at Rs 741.7, the 38.2 percent level. Stock’s wave pattern suggests it’s in the initial wave of a five-wave uptrend that will constitute a longer-term wave (5). Trend Intensity (TI) indicator rises to 18, suggesting stock is trending upwards; MACD is also positive and above its signal line. The stock has been down 14.23 percent this year as of last close, while the broader NSE Index is up 11.47 percent in the same period. (Reuters)

Shares of Yes Bank rose over 2 percent to their intra-day high of Rs 378.55 amid expectation of the bank getting RBI's approval soon for extension of Chief Executive Officer Rana Kapoor's term for another three years. Kapoor's tenure ends on August 31. The stock was up at 1.59 percent to trade at Rs 377.25 at 12.23 pm on the BSE. The stock has lost over 3 percent on Tuesday.

The BSE Sensex was trading at 38,888.75, marginally lower by 7.88 points, or 0.02 percent at 11.32 am, while the Nifty 50 traded at 11,729.05, down by 9.45 points, or 0.08 percent. Meanwhile, the Indian rupee hit fresh record low against the US dollar at 70.46. Midcaps trade strong keeping losses in check with the Nifty MidCap trading higher by 0.70 percent. The BSE MidCap surged by 0.63 percent. Prominent gainers were UPL, Vedanta, Yes Bank, ONGC, SBI, Grasim, Yes Bank, M&M, rising by up to 2.70 percent, while the laggards include Coal India, IndusInd Bank, HDFC Bank, NTPC, Infosys, Idea Cellular, HCL Technologies dipped by 2.63 percent. BSE Metal and Realty surged the most among sectoral indices, rising by up to 1.31 percent, while FMCG, IT, Telecom, Capital Goods, Teck declined. On the NSE, PSU Bank, Metal, Realty surged the most, while Nifty Bank was flat. FMCG, Media and IT were in the red.