Stock Market Highlights: The Indian market continued to end at fresh record high on Monday led by the gains from financials, pharma and FMCG stocks. At 3:30 pm, the Sensex ended 347.42 points or 0.77 percent at 45,426.97, and the Nifty was up 97.30 points or 0.73 percent at 13355.80. About 1,972 shares have advanced, 936 shares declined, and 190 shares are unchanged. UPL, Adani Ports, HUL, Bharti Airtel and Coal India were among major gainers on the Nifty, while losers included Kotak Mahindra Bank, JSW Steel, Tata Steel, Nestle and SBI Life.

8. Market breadth tilts in favour of bulls during last hour, advance-decline ratio at 3:1

Among sectors, Nifty PSU Bank, Nifty Pharma, Nifty FMCG and Nifty Media rallied the most while Nifty Realty was the only to end in the red.

Sharp upmove seen in Adani Enterprises, stock is up over 4% now.

#CNBCTV18Market | Sharp upmove seen in #Adani Ent, stock is up over 4% now pic.twitter.com/YzUioVgBgf

Rupee Updates: Indian rupee erased intraday gains and trading lower at 73.89 per dollar, amid buying seen in the domestic equity market. It opened flat at 73.79 per dollar against Friday's close of 73.78.

“Idon’t think this (market rally) can sustain,” said Samir Arora, Founder and Fund Manager at Helios Capital in an interview with CNBC-TV18. “..because it cannot be the case that after such a big event, every company that comes on your channel comes and says that we are either okay today or we will be okay in six months, I don’t believe that is possible. It is not consistent to have company A doing well and company B – which is in a competitive space – also saying I will be okay in six months,” he said.

Arora drew attention to the fact that in the last two-three years, numbers for most companies across sectors were sedate. But the situation has dramatically changed over the last few months.

Last few months looks indiscriminate, it doesn’t matter what sector, what stock. In in the very short-term it looks totally wild to me,” Arora mentioned.

Arora is bearish on commodity stocks said that he would avoid them even if they did well. Read more

MD & CEO Dinesh Khara encourages SMEs with cash flow issues to opt for restructuring. 'Will be able to sort out the issues with digital platform YONO very soon,' he tells us

'Will be able to sort out the issues with digital platform YONO very soon,' he tells us#CNBCTV18At21 pic.twitter.com/79lyLD2tzh

However, the progress on the vaccine front and continuing ETF outflows remain a concern. Gold has bounced back from recent lows but has stalled near 1,850, a strong support level turned resistance. A sharp rise is unlikely unless ETF buying picks up or there are concrete stimulus measures.

The share price of ICICI Bank jumped over 2 percent on Monday to cross the Rs 500-mark for the first time since March after the positive management commentary and RBI's move to ensure liquidity in the banking system while keeping interest rates low to support growth. Brokerages have raised their target prices on the private lender in view of its sustainable growth, adequate investment in the digital platforms and improved return ratios. At the analyst meeting on Friday, the bank showcased its digital strategy of each business segment while reiterating its narrative of ‘One Bank, One RoE and One KPI (key performance indicator)’. According to CLSA, the bank has been successful in improving the granularity and the quality of earnings over the past 5-7 years and as business volume and credit costs normalise post Covid-19, the bank remains well-positioned to deliver steady core PPOP growth. Therefore, the brokerage lifted its target price on ICICI Bank to Rs 625 from Rs 560 earlier. Continue reading.

#CNBCTV18Exclusive | Sources tell @PoddarNisha that @walmartindia-owned @Flipkart is exploring the option of listing overseas or in India by next year.

Flipkart tells us that an IPO has always been part of their long-term strategy pic.twitter.com/3iuqMHSyNw

Adani Ports & Special Economic Zone share price rallied over 4 percent to hit a fresh 52-week high of Rs 474.90 apiece on Monday. The stock gained after brokerages raised the target price as the operational turnaround of Krishnapatnam Port was faster than expected. The infra stock has rallied more than 38 percent in the last 6 months.

“Adani Ports & SEZ validated our recovery thesis with double-digit growth in its port traffic for a fourth month running in Nov 2020. In 2021, we expect strong double-digit traffic growth led by container, coal and new gas facilities (LNG/LPG), gaining share, the start of new ports in Myanmar & Vizinjham and the acquisition of Dighi Port to be catalysts,” CLSA said.

The brokerage raised its EPS 12 percent over FY22-23CL and raised its target price to Rs 540 from Rs 425 to factor-in a rebound in volume, higher margins and a lower cost of equity on the return of growth to its port business. It maintained a Buy rating on the stock. Read more here. 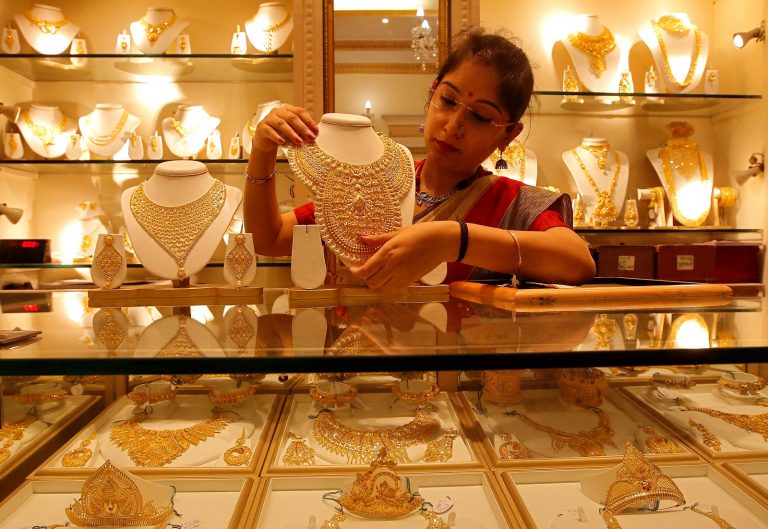 Gold prices in India traded sideways-to-higher on the Multi Commodity Exchange (MCX) Monday tracking a muted trend in the international spot price. Experts believe that the trend in the precious metal…

HSBC on Glenmark Pharmaceuticals | HSBC maintained a Hold on the stock and raised target price to Rs 570 from Rs 520. The successful capital raise by Ichnos Sciences would ease R&D & debt burden, however, the timeline remains uncertain, said HSBC. The recovery of US sales & improved execution to be key for operational turnaround and notable debt reduction, it added.

Sources tell us that promoters, who want an exit, have put controlling stake in Strides Pharma on the block. Favourable valuations, succession issue prime reasons for sale of Strides Pharma

#CNBCTV18Exclusive | Sources tell us that promoters, who want an exit, have put controlling stake in Strides Pharma on the block. Favourable valuations, succession issue prime reasons for sale of Strides Pharma pic.twitter.com/AOWpHhOM8x

Last week, banking regulator Reserve Bank of India (RBI) had asked HDFC Bank to stop temporarily all launches under its Digital 2.0 initiative and sourcing new credit card customers. The move came after the bank experienced multiple outages in its internet banking, mobile banking and payment utility services over the past two years.

Moody’s noted that the regulator's action was in response to weaknesses in HDFC Bank's digital infrastructure and operational resilience and was credit negative because the bank is increasingly relying on digital channels to source and service its customers.

“The recurring outages also risk hurting the bank’s brand perception among a growing and increasingly digitally savvy customer base, and increases the potential that clients switch to other banks, which would lead to a reduction in revenue and low-cost retail funding,” Moody’s said in a note on Monday. Click here to read more

Rupee Update: Indian rupee is trading higher at 73.71 per dollar, amid buying seen in the domestic equity market. It opened flat at 73.79 per dollar against Friday's close of 73.78.

Sameet Chavan, Chief Analyst-Technical and Derivatives, Angel Broking: We have been hovering in the overbought territory since the last 2-3 weeks; but sometimes the market does not respect the theory and hence, it can remain overbought for a long time as well. But in our sense, the optimism has now turned into a bit of euphoria and when such a condition happens, it’s advisable to be a proactive bit and take some money off of the table, especially for a momentum trader. Undoubtedly, the broader degree trend remains strongly bullish and in case of any meaningful decline, one should stick to the ‘buy on decline’ strategy.

The level of 13,300-13,500 would be seen as immediate resistance zone; whereas on the lower side, 13,150-13,100 are the levels to watch out for. If we meticulously observe the intraday charts, we can see a formation of ‘Rising Wedge’ pattern on hourly chart and hence, a move below 13,100 would lead to further profit booking towards 12,980-12,900. Hence, traders are advised to take a note of all these key levels and act accordingly.
Share:

Deepak Parekh of HDFC says that the negative GDP growth in Q2 should be seen as an aberration. Parekh is optimistic on the future of real estate, especially small homes.

#CNBCTV18Exclusive | Deepak Parekh of HDFC says that the negative GDP growth in Q2 should be seen as an aberration.

Parekh is optimistic on the future of real estate, especially small homes.#CNBCTV18At21 pic.twitter.com/vcs8JPM0oE

Banks to remain shut on these days in December; check full list here

Banks in Delhi, Mumbai, Chennai and Kolkata will remain shut for several days in December, including Christmas.

According to the Reserve Bank of India (RBI) guidelines, all banks in the country - including public sector, private sector, foreign banks, cooperative banks and regional banks - are shut on every Sunday and on the second and fourth Saturdays of every month.

Additionally, there are several other festivals for which the holidays vary from state to state. Here's the full list

Shares of Oil & Natural Gas Corporation Ltd (ONGC) rallied over 4 percent in early trade on Monday after the state-run oil explorer informed that its overseas investment arm ONGC Videsh Ltd has made a "significant" oil discovery in an onshore block in Colombia.

ONGC Videsh struck oil while drilling an appraisal well 'Indico-2' in CPO-5 block in Llanos Basin of Colombia, the company said in a statement.

OVL is the operator in the block with a 70 percent stake. Geopark Ltd, an independent oil and gas company focussed on Latin America, has the remaining 30 percent interest. Read more here

#OnCNBCTV18 | Nilesh Shah of @CapitalEnvision advises investors to stick around & ride the uptrend.

'Believe Indian market is still in a very strong uptrend. Next 3-5 years will be good for investors here,' he adds#CNBCTV18At21 pic.twitter.com/ruaNnpb5ao

Indian Railway Finance Corporation (IRFC) initial public offering of about Rs 4,600 crore may hit the markets later this month, a first by a non-banking financial company (NBFC) in the public sector.

"In all probability, it (IPO) will be by the third week but, if the market is not okay then we can go to the first or second week of January also," Amitabh Banerjee, Chairman and Managing Director, IRFC, told PTI.

The company, the dedicated financing arm of the Indian Railways, will be going for the anchor investment also.

"The government is planning to have anchor investors in place for this IPO," he added.

In January 2020, IRFC filed draft papers for its IPO.

According to market sources, the IPO is likely to be worth around Rs 4,600 crore. Read more here

Nagaraj Shetti, Technical Research Analyst, HDFC Securities: The short-term trend of Nifty continues to be positive. The pickup of upside momentum in the latter part and the negation of bearish pattern of daily (bearish engulfing) and weekly (doji) timeframe chart is expected to result in further strengthening of up move in the near term. The upside levels to watch this week is 13,500 and the immediate support is placed at 13,150.

Opening Bell: The Indian market opened flat on Monday, with Sensex up 20 points at 45,099 and the NSE Nifty 50 index unchanged at 13,264. All sectoral indices too have opened flat in today's session. The Nifty Media index is up 0.7 percent while the PSU Bank index has gained 0.3 percent. Broader markets have opened higher and are outperforming the benchmarks, with Nifty Midcap index up 0.3 percent while the Smallcap index up 0.5 percent at the start of trade.

ICICIdirect: Indian markets are likely to see a gap down opening tracking some profit booking pressure likely to be seen post strong rally despite strong global cues. However, global news flows and sector specific development will be key monitorables. US markets ended higher amid optimism related to Covid-19 vaccine and fiscal stimulus despite release of weaker-than expected macroeconomic data.

#OnCNBCTV18 | MR Kumar, Chairman of LIC India, says that co made a good profit this year. He further adds that equity portion is quite small while the debt portion is high.

He believes there could be more volatility in markets over the coming months.#CNBCTV18At21 pic.twitter.com/jsg6RN5imm