Stock Market Highlights: Indian indices ended higher on Monday led by a surge in heavyweight financials. HDFC twins, ICICI Bank and Kotak Bank contributed the most to the indices. The Sensex ended 364 points higher at 38,799 while the Nifty rose 95 points to settle at 11,466. Among sectors, Nifty Bank and Nifty Fin Services surged over 2 percent while Nifty Media added 0.7 percent. Meanwhile, Nifty Pharma and Nifty IT lose 0.3 percent each during the day.

- Midcap Index Almost Positive For The Year; Nifty Bank At A 1-mth High

Indian indces ended higher on Monday led by a surge in heavyweight financials. HDFC twins, ICICI Bank and Kotak Bank contributed the most to the indices. The Sensex ended 364 points higher at 38,799 while the Nifty rose 95 points to settle at 11,466. Broader markets were also positive with the midcap and smallcap indices up 0.8 percent and 1.7 percent, respectively. On the Nifty50 inde, Zee, Kotak Bank, IndusInd Bank, Bajaj Finance and HDFC Bank were the top gainers while PowerGrid, M&M, Adani Ports, Hindalco, and Grasim led the losses. Among sectors, Nifty Bank and Nifty Fin Services surged over 2 percent while Nifty Media added 0.7 percent. Meanwhile, Nifty Pharma and Nifty IT lose 0.3 percent each during the day.

Zee Entertainment Enterprises (ZEE) rose nearly 6 percent on Monday after veteran investor and the company's Independent Director Manish Chokhani bought shares of the company. Chokani bought around 1 lakh shares for Rs 2 crore at a share price of Rs 200 per share. Chokhani now owns 2 lakh shares in the company, the company disclosed in a recent filing. The stock rose as much as 5.8 percent to its intra-day high of Rs 203.35 per share.
Share:

Supreme Court Observes: Govt should move to cancel license, spectrum if dues are being wiped out Speaking about capacity utilization, Sunil Bohra, group CFO of Minda Industries said, “Compared to last year August to this year July, 2-wheeler is leading the pack with demand close to 80-90 percent of last year and 4-wheelerrs also fast catching up.”

Union Bank of India share price jumped almost 5 percent after the PSU bank declared its June quarter results. The PSU lender on August 21 has reported a profit of Rs 332.74 crore for the quarter-ended June after the merger with Corporation Bank and Andhra Bank. Profit in the year-ago period was Rs 224.43 crore. It had posted a loss of Rs 2,503.2 crore in the March quarter.
Share:

The maiden rights issue of Minda Industries is set to open tomorrow, i.e. August 25. The last day for submission of the application will be on September 8, 2020. The auto parts maker said that its board has fixed Rs 20 per share as the issue price for the issue. The issue price is at 26.8 percent discount to August 21's closing price of Rs 341.50 per share. The company said that it will issue 1 crore fully paid equity share of face value of Rs 2 each for an amount aggregating to Rs 250 crore. “The company has made necessary arrangements with NSDL and CDSL for the credit of the rights entitlements in dematerialized form in the Demat account of the eligible equity shareholders as on the record date,” Minda Industries said. More here
Share:

The next few years will see a big growth boost for the midcap IT companies in India, said Raamdeo Agrawal, chairman, Motilal Oswal Financial Services, adding that these firms have done more business in the last four months than the last few years in the country.

According to Agrawal, the midcap IT space looks very interesting as "India has an edge here". While sharing his views and outlook on markets in an exclusive interview with CNBC-TV18, Agarwal said that he is focusing on figuring out how good or bad the current business conditions are and understanding the impact of the pandemic on the earnings power of the companies. More here 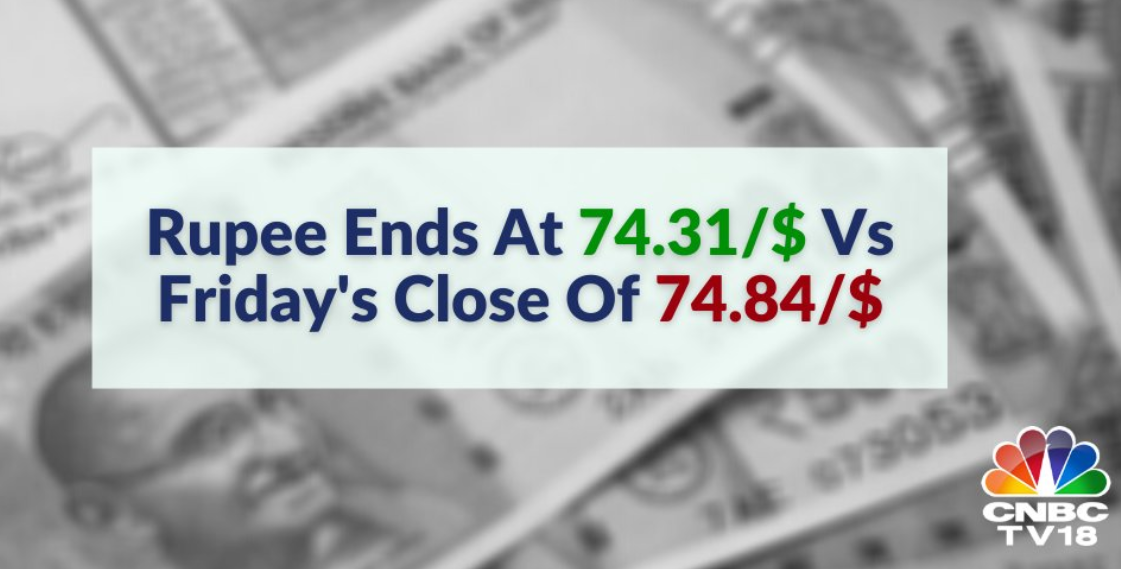 Shares of Orient Bell rose nearly 13 percent on Monday after ace investor Porinju Veliyath-owned Equity Intelligence India acquired an additional 80,000 shares in the company on Friday. As per the NSE data, the equity was bought at Rs 91.87 per share. As of June 2020 end, Equity Intelligence India already held a 1.57 percent stake, or 2,25,000 shares, in the company. The stock rallied as much as 12.8 percent to Rs 104.50 per share. However, on a year-to-date basis, the stock has declined nearly 30 percent on a year-to-date basis while as compared to around 7 percent declined in the same period.

In a first, MCX, the largest commodity exchange in the country, on Monday, launched trading in bullion index futures on MCX iCOMDEX Bullion index or the MCXBULLDEX. The index will track the real-time performance of flagship near month MCX Gold (1 Kg) and Silver (30 Kg) futures contracts. The weightage of gold in the index is 70.52 percent and that of silver is 29.48 percent. Three futures contracts of the bullion index expiring in September to November are available for trading. The contracts would be settled in cash. The lot size of the index is 50 lots. It means the profit and loss in Re 1 movement is Rs 50. More here
Share:

Private equity major Warburg Pincus backed jewellery retail firm Kalyan Jewellers has filed its draft red herring prospectus (DRHP) with market regulator Securities & Exchange Board of India (SEBI) for a Rs 1,750-crore initial public offer (IPO), according to a report by Moneycontrol. The fresh issue component will be Rs 1,000 crores and the promoters and Warburg Pincus will dilute stake worth Rs 250 crore and Rs 500 crore, respectively, the Moneycontrol report added quoting people with the knowledge. The IPO will facilitate a partial exit for the private equity investor and also facilitate debt reduction, it added. More here 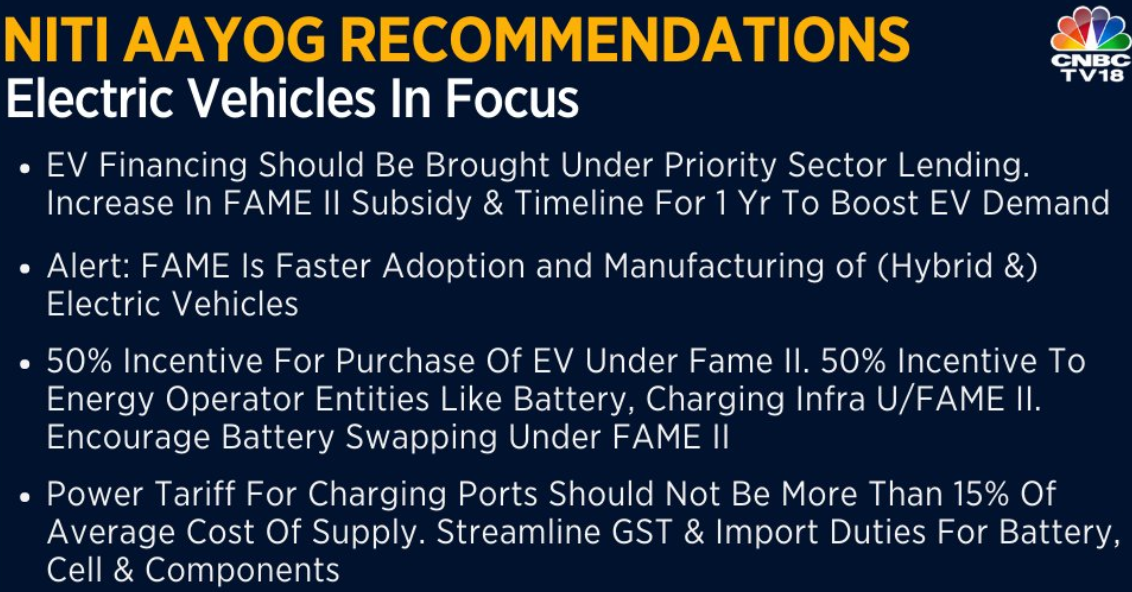 We have added select financial stocks, said Samir Arora, founder & fund manager of Helios Capital in an interview to CNBC-TV18. However, we continue to remain negative on the auto sector. According to him, auto sales have picked up only because of pent-up demand. Speaking about stocks, Arora said we continue to remain bullish on our biggest holding, HDFC Bank. He further said that we are negative on consumer stocks owing to elevated valuations. We have bought Indian Hotels recently, added Arora. See the video

Gold prices in India fell on the Multi Commodity Exchange (MCX) Monday following weakness in international spot prices amid steady dollar. Silver prices also declined by over 1 percent. At 11:13 am, gold futures for October delivery fell 0.59 percent to Rs 51,710 per 10 grams as against the previous close of Rs 52,016 and opening price of Rs 51,860 on the MCX. Silver futures traded 1.31 percent lower at Rs 66,191 per kg. The prices opened at Rs 66,589 as compared to the previous close of Rs 67,067 per kg. More here

The share price of Eicher Motors jumped over 10 percent after the 1:10 stock split came into effect on Monday. The stock gained for the third trade session today, making it to the top gainers' list on Nifty in terms of gains in percentage. The company, in its June board meet, had approved a stock split in the ratio of 1:10 -- sub-division of equity shares from the existing one equity share of the face value of Rs 10 each into 10 equity shares of the face value of Re 1 each. The stock, however, pared gains, trading 6.67 percent higher at Rs 2316.80 per share, at 12:01 pm. It has fixed August 25, 2020, as the record date for the stock split. Trending Stock: Steel Strips Wheels shares traded 2.25 percent higher to Rs 486.05 per share on the NSE after the company won export orders of over 3,200 wheels worth Rs $57,000 from the EU Truck and U.S. Mobile home market. The company's exchange filing said that the orders will be executed in the month of September.

Future Retail's  share price slipped  nearly 6 percent on Monday after sources said that the company is in talks with lenders to avert default. At 11:27 am, the stock fell 6 percent to Rs 115.30 on the NSE.

The company has to repay its coupon holders $14 million or almost Rs 105 crore in interest due for its $500 million senior secured notes. If it fails to honour its dues, the retail company would be in default and may face downgrades from rating agencies.

The retail giant has found itself in troubled waters since the nationwide lockdown started. Future Group had a consolidated debt of Rs 12,778 crore as of September 2019, as per the company’s public records. Its flagship company Future Retail had a gross debt of Rs 2,657 crore as of March 2019.

PNB is targetting to raise funds via QIP by Q3 or early Q4 of FY21, says it has all requisite approvals in place to raise funds via QIP. About 5-6% Of PNB’s credit book may be restructured under RBI’s August 6 circular. The company says it will have a clearer picture on recast book by September end. Technical Experts View: Nooresh Merani from nooreshtech.co.in suggests two recommendations. "Buy Tata Chemicals. It has broken out above the Rs 320-325 mark which has been the high since the listing. We would expect a move towards Rs 350 and a stop loss to be placed at Rs 320." The second one is Power Grid with a stop loss at Rs 183 and a target price of Rs 200. Merani says, "The stock has broken out of a tight range for a long time and has seen good volumes."

Buzzing Stock: Orient Bell's shares are trading 8.26 percent higher to Rs 100.25 per share on the NSE after Porinju Veliyath's Equity Intelligence India acquired 80,000 shares or 0.56% stake in the company on Friday at Rs 91.87 per share.

The recovery in broader markets seems to be starting. After the rally from March 2020 lows, the Nifty is now trading at a premium to its long-period average. Midcaps, on the other hand, has started performing over the last two months – post its underperformance over more than the two years. In fact, Nifty Midcap100 is down just 2 percent YTD as compared to Nifty which is down 6 percent. So should investors move towards midcaps from the safe largecap stocks? Brokerage house Motilal Oswal has listed 5 high conviction ideas from the midcap space with equal weightage (20 percent each). The brokerage expects these stocks to do well in the short to medium term. One can buy this basket of 5 stocks with a potential upside of 10-15 percent over a time frame of 1-3 months, it added. Here's the list
Share: Little over 7 lakh shares of Ramco Systems change hands on exchanges in 2 blocks at Rs 233.50/sh 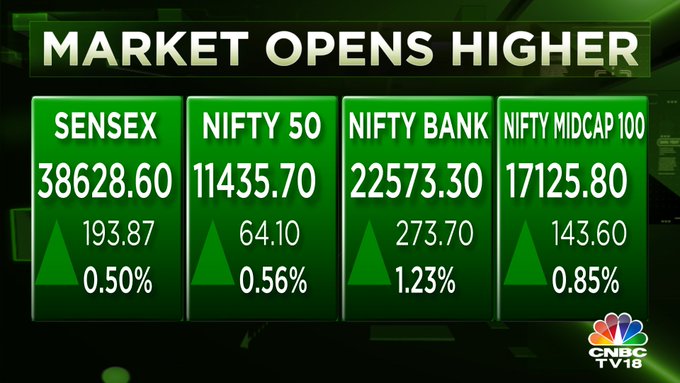 These SoPs have been finalised after consulting the health and home ministries, he said.

The shooting of films and TV serials can be started using these SOPs issued in the wake of the COVID-19 pandemic, the minister said.

Sharing details of the SOPs, Javadekar said barring those who are in front of cameras all others will have to wear masks.

He hoped that the release of the SOPs will not only lead to the resumption of the shooting of films and TV serials but also generate employment. Here's more