Stock Market Highlights: The Indian benchmark equity indices, Sensex and Nifty ended near day's high level on Tuesday led by the positive sentiment across global markets and buying sentiment in pharma space. Broader indices supported the gains, with Nifty Midcap 100 index and Nifty Smallcap 100 indices ending over 1 percent higher each. Among sectors, Nifty Pharma gained the most over 2 percent followed by Nifty Private Bank, Nifty Financial Services and Nifty IT. Nifty PSU Bank, Nifty Auto and Nifty FMCG traded in the red. IndusInd Bank and Cipla were the top gainers of the Nifty50 index while Titan and Maruti Suzuki were the top losers.

4. All Nifty Bank constituents except PNB, close in the green

10. Hexaware advances 6% after over 8 crore shares tendered for delisting

The Indian benchmark equity indices, Sensex and Nifty ended near day's high level on Tuesday led by the positive sentiment across global markets and buying sentiment in pharma space.

Among sectors, Nifty Pharma gained the most over 2 percent followed by Nifty Private Bank, Nifty Financial Services and Nifty IT. Nifty PSU Bank, Nifty Auto and Nifty FMCG traded in the red.

The board approved the closure of the issue period for the Issue today i.e. September 14, 2020, pursuant to the receipt of application forms for an aggregate of 3,47,74,811 fully paid-up equity shares of the company and the funds in the escrow account from eligible qualified institutional buyers in accordance with the terms of the issue, which opened on September 9, 2020.

Sources to CNBC-TV18 | India is getting ready to procure tactical winter equipment and wear, specialized weapons. The latest procurement drive to meet the immediate requirement of armed forces 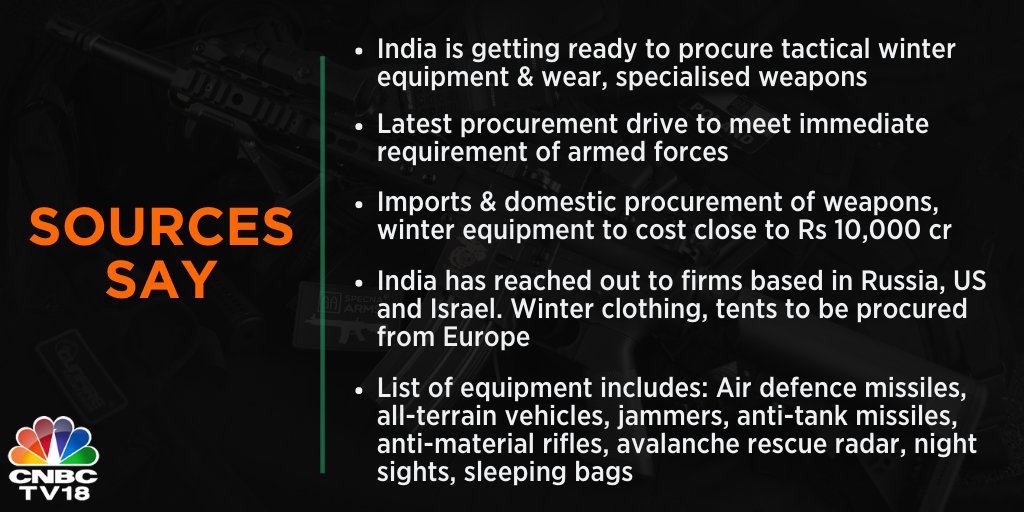 The company’s promoter/ promoter group shall not participate in the capital reduction. Consequently, the promoter’s stake will rise to 51.11 percent from the current 41 percent. The promoters will seek a SEBI exemption from the open offer requirement accordingly. Read more here.

Rupee Update: The Indian currency ended with losses in today's session despite positive equity markets. The rupee ended at 73.64 against the US dollar as compared to Monday's close of 73.48.

The banks continued de-risking in the financial year 2020 as data showed that the risk-weighted asset/ total during the year fell by another 150 bps YoY to 59 percent after a 230 bps fall last year. The private banks derisked more than the state-run lenders.

Deposit strength is divergent and reflects in the divergent share of retail and total deposits, concentration and cost of deposits, it added.

During FY20, net slippages doubled, due to a 28 percent rise in downgrades including DHFL and lower recovery/upgrade from a high base of last year. An on-year rise in net slippages comes from a low base, but much below FY16-18 levels. Read more

Parl Standing Panel on Finance recommends that tax on LTCG be abolished for all investments in startup cos. At a minimum, this should be done for at least the next 2 years to encourage investments during the pandemic period.

The National Highways Authority of India (NHAI) is likely to invite bids for the next tranche of highways under the toll-operate-transfer (TOT) model within 2-3 weeks, sources close to the development told CNBC-TV18.

The next bundle of highways will include highway assets of a cumulative length of around 180 km, the sources said. This is likely to be called Part A of TOT-5 or TOT Bundle-5 (A-1), indicating that it is expected to be followed by more such small stretches of highways.

This will be the first time that the government is offering smaller bundles of highways under the TOT model as TOT-1 offered 648 km, TOT-2 invited bids for 586 km of highways, TOT-3 offered 566 and TOT-4 initially offered around 400 km. Click here to read more

Stock Update: Gayatri Projects' shares traded 4.40 percent higher to Rs 17.80 per share on the NSE after it announced it is the L-1 bidder for a State Water and Sanitation Mission project in Uttar Pradesh. The project is valued at Rs 196 crore, with time-period of 10 years. The project involves construction of Kachonda Kalan Group of villages water supply scheme in Lalitpur, UP.

PFC decides to invest Rs 150 Cr in a JV co to be promoted by NTPC, Power Grid, REC & PFC, being set up for a common backend infrastructure facility pic.twitter.com/CCMuKHwOo5

Stock Update: Shares of JB Chemicals and Pharmaceuticals surged over 16 percent intraday and hit a 52-week high of Rs 965.00 on the BSE after the company reported strong earnings in the first quarter of fiscal 2021.

The stock price of JB Chemicals and Pharmaceuticals rose as much as 16.25 percent intraday. The stock has risen almost 90 percent since April 2020.

Stock Update: MindTree's shares hit 52-week high to Rs 1,252 per share on the NSE. The stock is up for the fourth day in a row and also top performer from the Nifty IT index.

Civil Aviation Minister @HardeepSPuri says Air India has huge debt & that the choice is between privatisation & closing down.

Will see pre-COVID levels in domestic aviation by end of this year, he adds. pic.twitter.com/MxwUWAIHD8

Gold extended its gains following weakness in the dollar against its major crosses and volatility in the next couple of sessions is expected to remain high ahead of the important Fed policy statement that is scheduled for release this week. Expectation is that the central bank could maintain a dovish stance and that could continue to keep the greenback weighed down. Uncertainty on the Brexit front is also likely to keep gold prices supported at lower levels. Yesterday, the PM won the so-called second reading vote on the bill that the EU says would collapse trade talks and propel the United Kingdom towards a messy Brexit. Apart from Fed, Bank of England will be releasing its policy statement and is likely to have an impact on the overall market. For today we expect gold on MCX to quote in the range of Rs 51,250 and Rs 52,250. On COMEX the expected range is $1,930 and $1,990.

Buzzing | Shares of SREI Infrastructure Finance rallied over 9 percent after the company reported its earnings for the first quarter of fiscal 2020. The company posted a net profit of Rs 23.01 crore in the June quarter as against a loss of Rs 69.29 in the March quarter. Revenue was at Rs 1,188.6 crore.

Technical View | We are trading above the 11,500 levels but I would still look out for the Nifty to trade in the 11,550-11,575 trading zone as that would signal that we are entering into a bullish zone. The support continues to be around the 11,300 levels, says Manish Hathiramani, Proprietary Index Trader and Technical Analyst, Deen Dayal Investments.

#CNBCTV18Exclusive | Sources say NHAI likely to invite bids for next tranche of highways under TOT-5 in 2-3 weeks pic.twitter.com/xrCzO18xgO

Stock Update: TAKE Solutions' shares are trading over 7 percent lower to Rs 45.90 per share on the NSE after the company decided to sell its entire shareholding to its subsidiary, APA Engineering. "The liquidity and business constraints, consequent to the impact of Covid-19 pandemic, have significantly impacted operations of the step-down subsidiary," added the company's statement.

Gold prices in India traded higher on the Multi Commodity Exchange (MCX) Tuesday following positive momentum in the international spot prices amid a subdued US dollar. Silver was also trading above Rs 69,000 per kg level.

“Gold prices gained on a subdued dollar. However, the upside remains restricted due to some positive developments over COVID-19 vaccine. Any major trend in the yellow metal may be seen after the US Federal Reserve policy meet and decision on the stimulus package,” said Ajay Kedia, director, Kedia Commodity Comtrade. Read more

Rupee Update: The Indian currency opened with gains on Tuesday amidst positive equity markets. The rupee opened at 73.37 against the US dollar as compared to Monday's close of 73.48. The focus will be on the trade data for the month of August.

Route Mobile IPO: Here's how to check your allotment status

The Rs 600-crore initial public offer of Route Mobile, a cloud communications service provider, was fully subscribed on the first day of its listing and ended with a stellar response from the investors. The IPO was subscribed 74.13 times on the last day of its bidding. It received bids for 89.23 crore equity shares against the IPO size of 1.2 crore shares.

Here's a step-by-step guide to help you check the allotment status on the Route Mobile IPO:

Shubham Agarwal's first sell recommendation is on HDFC. He said, "If you look at the derivative data, the stock has one of the weakest structure where for the 35-40 days it is in the short covering cycle.  Yesterday,  it saw a breakdown, there is a good possibility we might see a further follow up on selling in the stock. So, keep Rs 1,700 as strike put for a target of Rs 40 with a stop loss at Rs 15."

His second sell call was on Axis Bank. It has been correcting for the long time but now again we are seeing that the continuation pattern has a breakdown. Therefore, keep Rs 430 as strike put option can be bought for a target of Rs 18 with a stop loss at Rs 6, added Agarwal.

Lastly, the market expert has a buy call from the midcap IT space. He recommended MindTree, saying that it is at a new high. One can put Rs 1,240 strike call option bought as well as target at Rs 50 with a stop loss at Rs 22.

The Indian market opened higher with minor gains on Tuesday led by the positive sentiment across global markets.

Grasim and Titan were the Nifty50 top gainers while IndusInd Bank and Bharti Airtel remained the top losers.

Market breadth stood in favour of the gainers. 1,146 stocks on the NSE opened with gains while 332 stocks declined.