CNBC-TV18 Market Highlights: The Indian market ended higher on Thursday after it cheered relief package from the Finance Minister. The Sensex ended 5 percent higher while Nifty held on to its gains, at 8,600. IndusInd Bank remained the top-gainer of the day, ended 46 percent higher. Amongst slew of announcements by the FM, Sitharaman addressed directly to the poor by releasing Rs 1.7 lakh crore under the PM Gareeb Kalyan Scheme. She also said that the government will give an additional Rs 2,000 per worker and a wage hike for MGNREGA workers. Thank you for staying with us throughout the day. Keep following our page for all the market action as well as major economy, policy and corporate news.

Market at close on Thursday

7. IndusInd surges 46 percent to record the biggest single-day gain ever

Before we close the blog, here are the key takeaways from the FM speech that you can read

Today, Finance Minister Nirmala Sitharaman announced a slew of measures for the poor to deal with the economic distress caused due lockdown amid this coronavirus crisis. Here's the link to the highlights article

Rupee Update: Indian rupee trades higher by 54 paise at 75.34 per dollar against Tuesday's close of 75.88

The move, which will provide each worker with an additional income of Rs 2000, will benefit five crore families across the country. Click here to read more

Cheer up everyone! Employees can now withdraw up to 75% of EPF contribution

The announcements come in the wake of the prevailing condition due to Covid-19 across the country.

The Indian market has rebounded, rising 15-17 percent in just three sessions after falling 35 percent from January highs. The Sensex has rallied as much as 4,413 points or 17 percent, while the Nifty has added as much as 1,138 points or 15 percent since March 24. Here are the reasons why the Sensex rallied 4,000 points

She further announced a package of Rs 1.7 lakh crore under the PM Gareeb Kalyan scheme. Read here for more information

FM: MGNREGA wages to be increased, benefitting 5 crore families. Rs 2,000 per worker will be the additional income.

FM says: Have come out with package which will immediately take care of the poor

Ashok Leyland's shares rally 22% over adding stake in its subsidiary

The auto manufacturer acquired additional stake in its subsidiary Hinduja Leyland Finance resulting into a surge in the stock price of the company.

Need of the hour: 35 companies in race to produce wonder vaccine

As the world anxiously awaits a possible vaccine to prevent thousands of people getting infected from COVID-19 virus, around 35 pharmaceutical companies and institutes are racing against time to create such a vaccine. At least four such companies have already started testing in animals. Here are more details on this, click to read more Finance Minister Nirmala Sitharaman will address the media at 1 pm today. She is expected to announce some measures to boost the economy affected by the COVID-19 crisis.

BSE Stocks Update: 25 stocks trading in green, with IndusInd Bank as the top gainer. Tech Mahindra, RIL, Maruti Suzuki, UltraTech Cement and NTPC are the only top losers in the index. 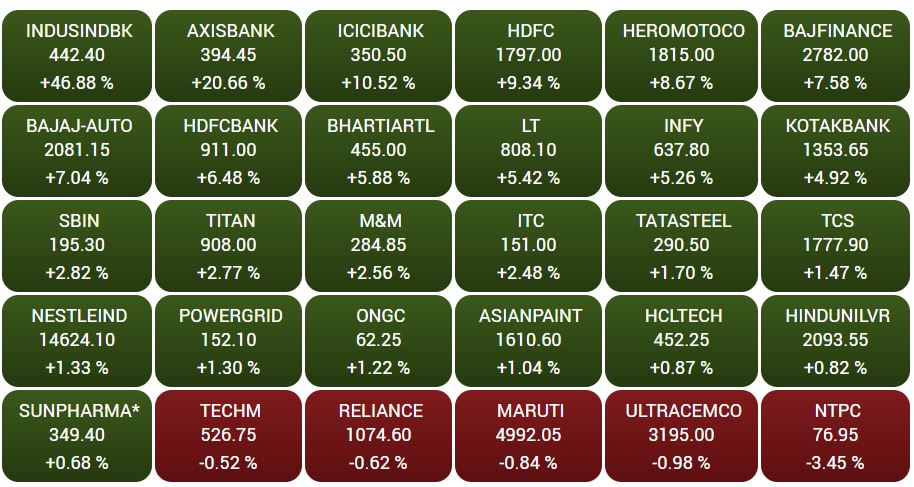 Buzzing Stock: IndusInd Bank climbs nearly 50% as the market continues to extend gains ahead of the FM's conference at 1 pm.

The government had earlier called for help from automobile manufacturers to help build ventilators and other medical gear in fighting the spread of the COVID-19.

Among all automakers, Mahindra & Mahindra and Tata Motors are the only ones to have extended their hand to the government's urgent call.

Wondering when will the markets heal? Here are 12 charts to monitor

Since the virus exploded beyond China in early March - triggering shutdowns of the biggest economies in the world - financial markets have gone into a tailspin. Stock markets lost almost a third of value, volatility spiked, credit stress soared and a dash for dollar cash worldwide amplified the anxiety.

However, Reuters have a dozen charts that tell the story of the financial and economic crisis so far. Click here to dive in!

The Finance Minister Nirmala Sitharaman may announce an stimulus package at 1 pm today.

On Tuesday, the FM had said that an economic package is in the works. According to a Reuters report, the government may announce a Rs 1.5 lakh crore economic package by the end of this week.

All this while, the government has been in consultation with the RBI and SEBI.

Coronavirus Update: India's total cases rises to 649, of which 593 are active cases, 42 recovered and 13 have passed away

As the market extended its gains in the morning trade, IndusInd Bank saw a wave of takers that shot the stock up 40 percent.

After declining 63 percent this month, the stock jumped 44 percent since yesterday.

Indian Pharma Association's secretary general Sudarshan Jain joins us this morning to discuss the stock in terms of APIs & drugs in the country, now that we are under lockdown for the next 2 weeks. Here's what he has to say#COVID2019 #CoronavirusOutbreak pic.twitter.com/pzFQ8r1sAB

Cipla gains 3% over US FDA approval

The pharma company received final approval for its ANDA from the US regulator. It is the first company to file for a 10mg Esomeprazole drug.

The company's board in its exchange filing announced that it will consider the proposal of buyback of equity shares. Thus, the share price locked in an upper circuit of 5 percent at Rs 56.

Gold prices fell on Thursday as investors scurried for liquid cash while awaiting the passage of a $2 trillion dollar U.S. stimulus package to combat the economic impact of the coronavirus epidemic.

Most measures have been targeted at providing liquidity to system, said Chopra to CNBC-TV18. He further added that average trading volume of 10-year yield is generally Rs 35,000-40,000 crore. Yields for even the best corporate bonds are trading at a spread of 300 bps.

Currently, there is no risk appetite in the market and the liquidity seems to be poor, added he.

The pharma company’s flagship facility (KRS Gardens) in Bangalore was inspected by the US FDA in March 2020. The regulator handed out successful closure of the inspections and gave the company an Establishment Inspection Report (EIR).

The share price is trading 4 percent higher at Rs 334. 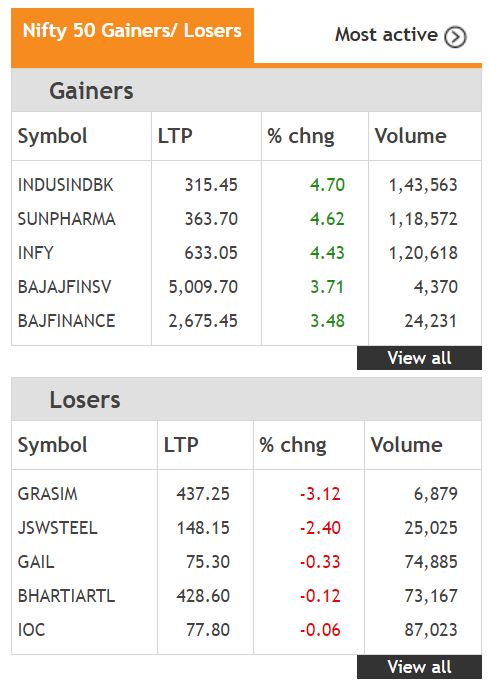 The Bill will be pushed on Friday by voice vote as most representatives are out of Washington. It includes direct payments to Americans, strengthened unemployment insurance, loans to businesses small and large and increased health care resources for hospitals and municipalities.