Market Breadth remains in favour of advances; advance-decline ratio at 2:1

Indian indices ended with gains for the third consecutive day on Wednesday due to Zee Entertainment and broader markets.

At close, the Sensex ended 96 points higher to 38,615 while the Nifty50 index ended at 11,408, up 23 points. Broader markets outperformed the benchmarks, with Nifty Midcap100 and Nifty Smallcap100 index closing 0.62 percent and 1.24 percent higher respectively.

The Supreme Court on Wednesday resumed the hearing on the issue of adjusted gross revenue (AGR) dues from telecom companies. On Tuesday, the apex court heard arguments largely from Harish Salve, the counsel for both Reliance Jio as well as the Committee of Creditors (CoC) led by the SBI pertaining to the sale of the spectrum by the insolvent companies RCom and Aircel. Read live updates here. 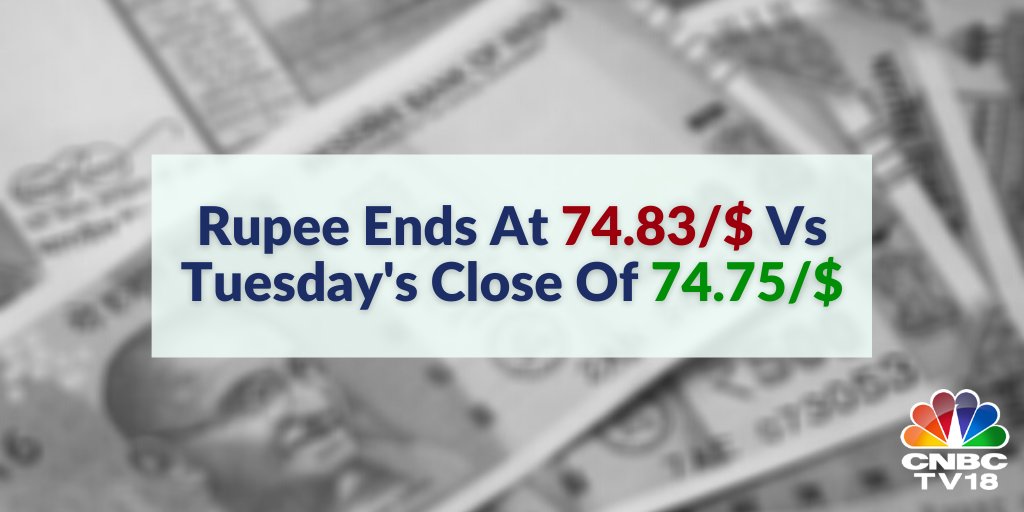 Man Industries has received a new export order of approximately Rs 405 crore. With this, the total unexecuted order book of the company stands at approximately Rs 1,800 crore, out of which 80 percent is exports. These orders are meant to be executed in the current financial year.

Stock Update: L&T Finance's shares trade 2 percent higher after media reports said that the company is exploring a plan to raise around $450 million through a rights issue. Just In: Bombay High Court dismisses Yes Bank’s petition against Zee Promoters. Zee has contended that it given a letter of comfort for loans which is not a personal guarantee. Yes Bank wanted take possession of pledged Zee promoter shares, invoke personal guarantee clause. Yes Bank had approached Bombay HC seeking to prevent the promoters of Zee from selling pledged shares.

Market participants in Europe broke from the positive sentiment on Wall Street, where the S&P 500 and Nasdaq Composite set records. The S&P 500 rose to an all-time high Tuesday, wiping out all its losses from the market sell-off caused by the coronavirus pandemic. It confirms the start of a new bull market.

A new strategic divestment policy for public sector enterprises (PSEs) is likely to make its way before cabinet in a few weeks, sources informed CNBC TV-18.

Currently, the government is reconciling views of ministries/departments on the new PSE policy, sources said.

The call on privatisation/strategic sale of public sector banks (PSBs)/insurance companies will be taken after cabinet's nod on this PSE policy. Don't miss the 'mine' of wealth! Pharma sector remains biggest buyer of this niche space

Post COVID-19, one niche space that is moving almost parallely with pharmaceuticals and FMCG is chemical amines. Both the front-runners from this sector- Alkyl Amines and Balaji Amines are running with the same pace as the pharma stocks.

Despite the small size of the amines industry ($4.1 billion), Alkyl Amines surged 167 percent while Balaji Amines jumped 112 percent, so far this year respectively.

Amines are organic compounds and majorly used in sectors like pharmaceutical, agrochemicals and paints. Given the current rally in all the three sectors, it is quite self-explanatory over amines companies splendid run in the market.

The highest amount of revenue in amines is contributed by the pharma space, about 51 percent followed by agrochem (26 percent), paints (4 percent) and oil & gas (3 percent). Given the pharma's highest revenue contribution to amines, it is quite likely that both these sectors will move hand-in-hand. Continue reading

Gold prices in India fell on the Multi Commodity Exchange (MCX) Wednesday tracking weakness in international spot prices on a steady dollar and ahead of US Federal Reserve meeting minutes, analysts said. Silver prices also declined by over 2 percent.

“Gold prices declined on a steady US dollar. Profit booking after a rise in the previous session also pressurized the yellow metal prices. Both precious metals are expected to remain volatile. While gold may trade with a downside bias,” said Amit Sajeja, AVP Research - Commodities & Currencies at Motilal Oswal. Read more

Here are a few top buzzing midcap stocks at this hour 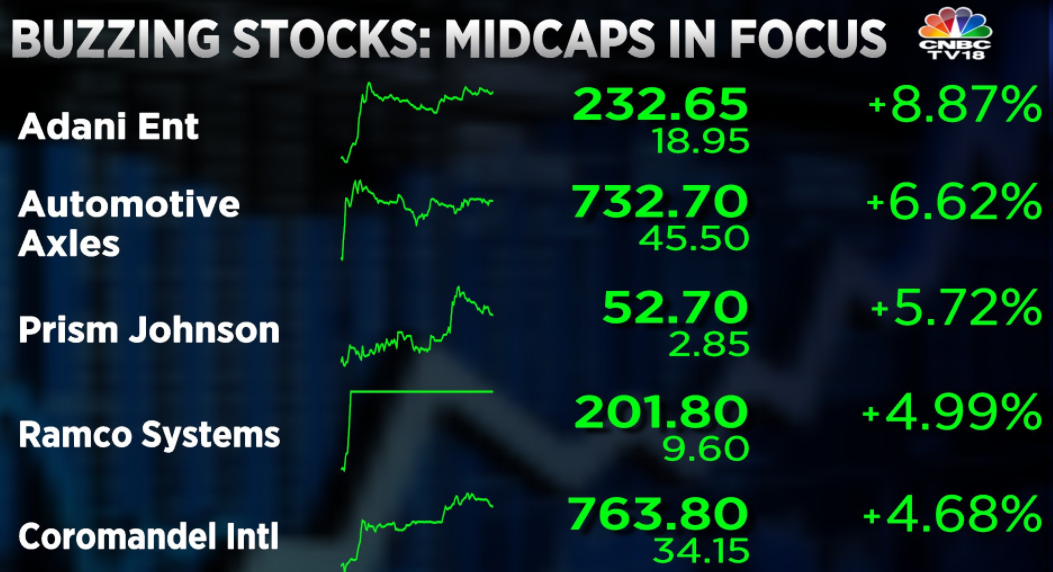 Japan's exports extended their double-digit slump into a fifth month in July as the coronavirus pandemic took a heavy toll on auto shipments to the United States, dashing hopes for a trade-led recovery from the deep recession. Meanwhile, core machinery orders, a leading indicator of business spending, unexpectedly fell to a seven-year low in June, dashing hopes domestic demand would make up for some of the slack from sluggish global growth. The grim data suggests the depressed conditions seen in the world's third-largest economy in the second quarter showed no signs of rapid improvement in the current quarter, compounding challenges for policymakers as they look to prop up activity. Total exports fell 19.2 percent in July from a year earlier, roughly in line with market expectations for a 21.0 percent decrease, government data showed on Wednesday. It was, however, smaller than a 26.2 percent drop in June, which some analysts saw as a sign external demand may have bottomed out.
Share:

“First is the buy call in Grasim Industries, yesterday the stock has seen a good breakout from its recent high as well as its 200 day moving average, the breakout was also a complete by very good volume. Today there is a minor retracement, but this retracement should be viewed as a good buying opportunity keep a stop below Rs 640 one can go long on Grasim for target of Rs 710.” “From the momentum perspective one of the midcap name INOX Leisure is doing quite well today. There is a breakout along with good volumes in INOX Leisure, keep a stop below Rs 265 for target of Rs 292, Rs 292 would be the first target and above that the stock has potential to test levels around Rs 300-305 as well.”
Share:

Zee Entertainment is expecting the ad revenues to grow in the second half of the year on the back of the festive season, said Rohit Gupta, Chief Financial Officer of the company. Gupta added that there was already some improvement seen in the ad revenue due to the lockdown relaxations. Gupta's comments came after the company reported its first-quarter earnings which saw a 94 percent fall in the net profit. The revenues came in-line with estimates, but the operating performance was lower than estimates. “Like every other business around the world, Zee was also impacted by the pandemic during the first quarter and the impact has been both from the operational and financial perspective," said Gupta. More here

Dilip Piramal of VIP Ind says co will not see a revival in sales unless airlines & railways function normally. 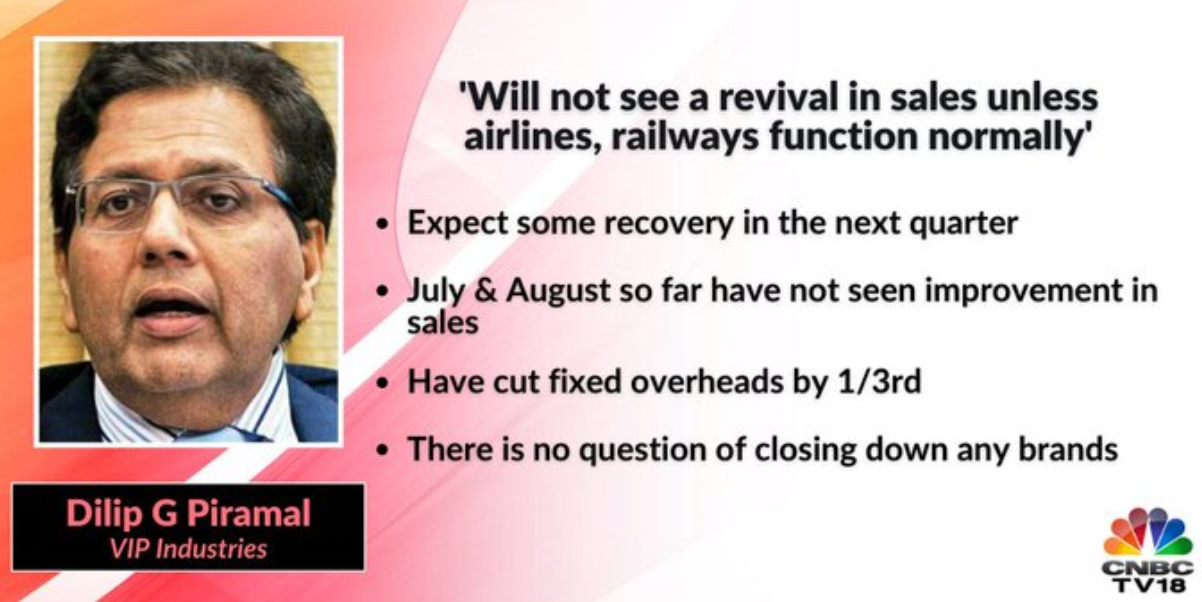 Shares of Reliance Industries (RIL) jumped 1.5 percent on Wednesday after the company announced the acquisition of a majority equity stake in online pharmacy delivery startup Netmeds. RIL subsidiary Reliance Retail Ventures has acquired a majority equity stake in Vitalic Health and its subsidiaries Netmeds for a cash consideration of approximately Rs 620 crore. The acquisition comes on the back of rival Amazon launching online drug sales in Bengaluru - Amazon Pharmacy, which will offer both over-the-counter and prescription-based drugs. Also, two other prominent e-pharma companies Medlife and PharmEasy are now looking for a potential merger. As per the CCI filing, PharmEasy looks to acquire 100 percent equity shares of Medlife. Medlife and its promoters will get 19.59 percent of the equity share capital of PharmEasy's parent company API Holdings
Share:

Dilip Buildcon stock price rallied over 4 percent after the company received a letter of acceptance (LOA) from Rail Vikas Nigam. The company has received the letter of acceptance (LOA) through its joint venture HCC-DBL (JV) on August 18, 2020 for the new project worth 1,334.95 crore in Uttarakhand from Rail Vikas Nigam Limited. The project includes the construction of tunnels, bridges, yard and formation works under package-9 in connection with new BG Line between Rishikesh and Karanprayag (125km) in Uttarakhand.

Technical View | The Nifty has opened in splendid form going past the 11,450 levels. We should be targeting 11,500 - 11,700 levels and this could be achieved during the course of this month's expiry itself. The support has been upgraded to 11,350. A buy on dips strategy can be implemented, says Manish Hathiramani, Index Trader and Technical Analyst, Deen Dayal Investments.

Rupee Opens | Indian rupee opened higher at 74.69 per US dollar as against previous close of 74.76.

Gold fell below USD 2,000 an ounce on Wednesday after rising sharply in the previous session as the dollar steadied, while investors awaited minutes from the US Federal Reserve's last policy meeting. Spot gold was down 0.4 percent at USD 1,993.68 per ounce by 0253 GMT, after hitting a one-week high of USD 2,014.97 on Tuesday. US gold futures fell 0.5 percent to USD 2,002.50. "Gold is down as the US dollar strengthened slightly this morning. In the short term, a rebound in the USD might inhibit the rally in gold," said DailyFx strategist Margaret Yang. More here

Post COVID-19, one niche space that is moving almost parallely with pharmaceuticals and FMCG is chemical amines. Both the front-runners from this sector- Alkyl Amines and Balaji Amines are running with the same pace as the pharma stocks. Despite the small size of this industry ($4.1 billion), Alkyl Amines surged 167 percent while Balaji Amines jumped 112 percent, this year respectively. Amines are organic compounds and majorly used in sectors like pharmaceutical, agrochemicals and paints. Given the current rally in all the three sectors, it is quite self-explanatory over amines' splendid run in the market. The highest amount of revenue in amines is contributed by the pharma space, about 51 percent followed by agrochem (26 percent), paints (4 percent) and oil & gas (3 percent). Given the pharma's highest revenue contribution to amines, it is quite likely that both these sectors will move hand-in-hand. More here

IRB Infra up more than 10%; Here are a few other buzzing midcap stocks Indian indices opened higher on Wednesday, tracking gains Asian peers after they climbed to a seven-month peak as S&P 500 scaled all-time highs in overnight trade. At 9:18 am, the Sensex was trading 217 points higher at 38,745 while the Nifty rose 60 points to 11,445. Gains in domestic indices were led by banks and index heavyweight Reliance Industries. The banking index surged 0.7 percent while the pharma and auto sectors were up around half a percent each. L&T, Adani Ports, ICICI Bank Reliance Idnustries, and ITC were the top gainers on the Nifty50 index at opening while HCL Tech, Nestle, Tata Steel, JSW Steel, and BPCL led the losses.

Asian shares climbed to a seven-month peak on Wednesday tracking the S&P 500, which scaled all-time highs driven by ever expanding policy stimulus aimed at cushioning the blow to economies from the coronavirus pandemic. MSCI's broadest index of Asia-Pacific shares outside of Japan rose 0.3 percent, up for a third straight day to 570.80 points, a level not seen since late January. The gains were driven by Australian shares, up 0.8 percent and South Korea, which added 0.6 percent. Japan's Nikkei nudged up too though Chinese shares started weaker with the blue-chip CSI300 index off 0.7 percent. Overnight, both the S&P 500 and Nasdaq Composite set records soon after the opening bell following strong sales growth reported by major US retailers including Walmart, Kohl's and Home Depot.

Arvind Sanger of Geosphere Capital Management is underweight on the financial sector.