Indian equity indexes ended mildly lower on Thursday, largely helped by late buying in pharma, metal, FMCG, IT and other midcap stocks. But sustained selling in large cap and private bank stocks kept indices subdued. On top of it, the Indian rupee's steep fall against the dollar didn't help trade sentiment on a day the August F&O contracts were expiring. After trading negative for the day, the Sensex ended 33 points lower, or by 0.08 percent, at 38,690.10, while the NSE Nifty 50 settled at 11,677, down by 15 points, or 0.13 percent. Midcaps ended in the positive territory with the BSE MidCap rising over 0.30 percent. Here are the main updates and highlights from the stock markets today:

Indian equity indexes ended mildly lower on Thursday, largely helped by late buying in pharma, metal, FMCG, and IT stocks. But sustained selling in large cap and private bank stocks kept indices subdued. The Sensex ended 33 points lower, or by 0.08 percent, at 38,690.10, while the NSE Nifty 50 settled at 11,677, down by 15 points, or 0.13 percent. Midcaps ended in the positive territory with the BSE MidCap rising over 0.30 percent.

Godfrey Philips trades higher by over 3%, Sensex sheds over 100 points

Shares of PVR hit a one-month high of Rs 1,401 as a report said that the company plans to buy Wave Cinemas for Rs 450 crore, two weeks after the company acquired south Indian multiplex chain SPI Cinemas. Though other multiplex operators such as Cinepolis and Inox Leisure are in the fray to buy the company, Wave Cinemas is inclined to strike a deal with PVR, the report said. A spokesperson for PVR has denied that such talks were on, but the report, quoting sources, said PVR and Wave Cinemas will announce a deal towards the end of 2018. Wave Cinemas owns properties across Noida, Lucknow, Rudrapur, Haridwar, Ludhiana, Moradabad, Chandigarh, Meerut, and Jammu, according to the report said. At 1.44 pm, PVR shares were trading at Rs 1364.35, up by 0.22 percent. So far in August, the company has gained 24 percent. (Cogencis) 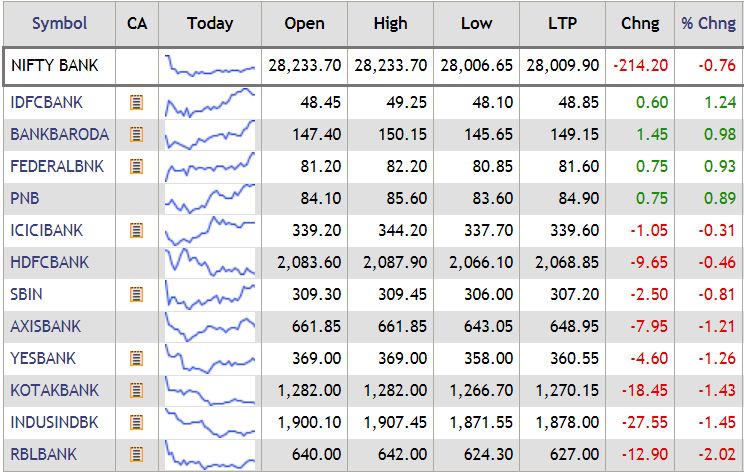 Shares of Aditya Biral Capital rose 3.57 percent to trade at Rs 142.20, helping midcap index outperforming frontline index. Aditya Biral Capital has received a rating upgrade for their housing and NBFC arm with an added tailwind is the setting up of a joint venture for stressed assets.

United Bank of India shares trade at Rs 12.42, up 10.30 percent on the BSE at 12.05 pm. The stock hit an intra-day high of Rs 12.79, spiking over 13.5 percent on reports that the lender is planning Rs 1500 crore capital infusion in FY19. Nifty Bank, meanwhile trades lower by over half a percent, while PSU Bank and PVT Bank indices also trading sharply lower. The scrip has outperformed the sector by over 10.50 percent.

Shares of Greaves Cotton soared 7.67 percent to trade at Rs 157.90, gaining Rs 11.25 on the BSE at 11.29 am. Intra-day, it hit a fresh high of Rs 164.55 after reports that the company has acquired 67 percent stake for Rs 77 crore in Ratan Tata-backed Ampere Vehicles. The company's management told CNBC-TV18 that they expect Ampere to break-even at EBITDA level in 2nd year of acquisition & expect to report Rs 60 crore revenue in FY19.

Yes Bank shares declined again on Thursday, as the Reserve Bank of India's (RBI) approval for its founder chief executive officer (CEO) Rana Kapoor's reappointment for another three years still remains elusive. The speculation over Kapoor's future at the bank has fueled anxiety and the stock has underperformed for the last three days, dipping 5.06 percent during the period. Rana Kapoor's tenure at the corproate lender ends on August 31. At 9.52 am, the priavte sector bank's scrip traded at Rs 360.60, slipping lower by 1.48 percent, after opening at Rs 369.70. The stock has traded lower than 5 day, 20 day and 50 day moving average, but higher than 100 and 200 day moving average. Meanwhile, benchmark indexes continue to trade lower after a tepid start on Thursday. The BSE Sensex traded at 38,638.49, lower by 85 points, or 0.22 percent at 10.13 am. The broader NSE Nifty 50 shed 30 points to trade at 11,662.10, dipping 0.25 percent. Nifty Bank was down by 197 points, or 0.70 percent, to 28,026.

Pharma, IT stocks were among top Sensex gainers

Indian equity indices started on a flat note tracking weakness in the Indian rupee and ahead of the expiry of August F&O contracts despite positive global cues. The BSE Sensex jumped over 74 points, or 0.19 percent, to 38,797 in the opening trade, while the NSE Nifty 50 started at 11,694, marginally up by 2.85 points, or 0.02 percent. The BSE index soon slipped lower, trading higher by just 16 points to 38,739 at 9.16 am. The NSE index also dipped to 11,693.15. Shares of Oil marketing companies were immediately under pressure as a lower rupee means higher import costs. The double whammy came with Brent crude prices above $77 per barrel mark, putting additional pressure. IOC declined nearly a percent, HPCL slided by 1.71 percent and BPCL was lower at 0.62 percent. The Indian rupee fell to a record low of 70.8125 against the dollar, after opening lower at 70.63. The home currency had closed at 70.59 on Wednesday.

Lodha faces legal tussle with homebuyers ahead of IPO

Lodha’s Wadala project named New Cuffe Parade has had a turbulent journey from the get-go. Although it was launched in 2011 and was set for completion by December 2015, tussles with the civil aviation ministry over the height of the towers in the project have resulted in a delays. Read full report here.

Rupee opens at record low of 70.63 against the dollar

Diesel prices in Kolkata, Mumbai and Chennai were at Rs 72.78 per litre, Rs 74.24 per litre and Rs 73.88 a litre, touching fresh highs. Petrol prices too inched near their all-time peak across major cities with Kolkata hitting Rs 81.23 per litre. The prices stood at Rs 85.72 a litre in Mumbai and Rs 81.35 a litre in Chennai. Read more

Aditya Birla Capital and Varde Partners are creating a joint venture to invest as much as $1 billion (about Rs 7,063 crore) in distressed assets in India, Bloomberg reported. The US-based investment company and the Indian financial services provider are likely to deploy $1 billion in three years, the report said citing people familiar with the transaction.

MRF is the most expensive stock listed on the Bombay Stock Exchange (BSE) going by the per share price. MRF is followed by Page Industries, which closed at Rs 35,946 apiece on Tuesday. Similarly, any investor will have to spend at least 25,000 to own one share of Eicher Motors and 3M India. Read more about such expensive stocks.

#StocksToWatch | Here is the list of stocks that will be on radar today pic.twitter.com/drO9z7yrvn

Citi maintains NEUTRAL rating on Tata Power at a TP of Rs 77.

Believe risk-reward on the stock is compelling, says Citi on Petronet LNG; BUY at a TP of Rs 290.

Citi maintains BUY rating on Marico at a TP of Rs 430.

Goldman Sachs maintains NEUTRAL rating on Zee Entertainment at a TP of Rs 509.

Emkay on Suven Life maintains BUY rating at a TP of Rs 300.

HSBC on Jet Airways reduces rating on the stock with target at Rs 150/share, says company’s turnaround plan looks sensible but execution could be a challenge.

Analysis suggests company should be able to shift Absorica market to a new formulation, says Credit Suisse on Sun Pharma; OUTPERFORM at a TP of Rs 705.

High probability that company will be acquired by parent and followed by merger with Indian arm, says Credit Suisse on GSK Consumer; OUTPERFORM at a TP of Rs 8,600.

NBFC shares: RBI is planning to extend the February 12 circular for resolution of stressed assets put in place for banks to non-banking financial companies (NBFCs) as well.

IT, oil stocks: The Indian rupee closing at a fresh lifetime low of 70.59 by falling 49 paise against the dollar will impact the trade in these stocks.

Bharti Airtel: Shareholders have approved the proposed merger between the company and Tata Teleservices as part of ongoing proceedings at the National Company Law Tribunal (NCLT).

Tata Chemicals: ICICI Prudential Life Insurance sold 52,13,678 shares of the company at an average price of Rs 414.21 per share which were worth Rs 216 crore. Its stake in the company reduced to 2.97 percent from 5.02 percent earlier.

Here is what you need to know before the market opens

Dollar: The dollar index against a basket of six major currencies struggled near a four-week low of 94.434 plumbed on Tuesday, weighed by the pound’s rally. The euro was steady at $1.1709 after edging up 0.1 percent the previous day. The dollar was flat at 111.68 yen after rising 0.4 percent overnight.

Crude prices: US crude futures rose 0.25 percent to $69.68 per barrel. Oil contracts had risen more than 1 percent on Wednesday, supported by a drawdown in U.S. crude and gasoline stocks and as U.S. sanctions reduced Iranian crude shipments.