CNBC-TV18 Market Highlights: Domestic stock markets settled on a positive note on Tuesday, as oil prices eased due to a lack of further escalation in Middle East tensions. The S&P BSE Sensex index ended 192.84 points or 0.47 percent higher at 40,869.47, while the broader NSE Nifty benchmark closed 67.25 points or 0.56 percent higher at 12,060.30. Gains in realty, banking and metal stocks pushed the domestic markets higher. Here are the main highlights and updates from the stock markets today:

-Market closes in the green but off highs

-Sensex slips 361 points from highs to close with a gain of 193 points -Nifty ends 60 points higher after a 147-point trading range -Nifty Bank falls 452 points, Midcap Index 138 points from highs -Except PSU Bank all sectoral indices close with gains; Realty top gainer  -Infosys under pressure ahead of result on January 10 -ONGC and IOC slip on reports of cos being asked to take part in BPCL share sale -Zee Entertainment up over 2 percent after CLSA has co as top media pick -Reliance gains nearly 2 percent to close the session above 50-DMA -NMDC closes 1 percent lower amid volatility on Donimalai uncertainty
Share:

#CNBCTV18Market | Bombay Burmah at day's high; stock up more than 4% in the last hour pic.twitter.com/Gf5DUF2SJE

The Maharashtra government on December 21 announced a loan waiver of up to Rs 2 lakh for farmers with a cut off date of September 30, 2019, and providing relief to non-defaulting farmers who have a loan above Rs 2 lakh.

The cost of this farm loan waiver would be at least Rs 45,000 crore, according to analysts. Maharashtra has a large share of agriculture credit in the country and it also has the largest contribution to agriculture Non-Performing Assets (NPAs) in the country as per RBI data.

Around 15 percent of overall agriculture NPLs in the country are contributed by Maharashtra.

On a journey towards IPO for Biocon Biologics, says Kiran Mazumdar Shaw

According to her, Biocon Biologics is set to achieve $1 billion in revenue by FY22 as “the opportunities are very well marked out".

Private equity fund True North has picked up a 2.44 percent stake in Biocon Biologics for more than Rs 530 crore. Mazumdar Shaw said that the first step is to get a benchmark equity valuation ahead of possible IPO for biologics arm.

“We might raise little more private equity prior to IPO. This basically gives an idea of where we believe we can unlock the value in terms of Biocon Biologics in the next few years,” she said in an interview with CNBC-TV18. READ MORE

Broker Forum may meet SEBI officials tomorrow on margin circular as the circular forces brokers to insist TMs to deposit funds, securities with them

The share price of Panama Petrochem rallied over 14 percent intraday on Tuesday after the company's promoter shareholding increased in December.

In its BSE filing, it said, "Panama Petro's promoter shareholding increased to 72.82 percent in December as compared to 70.49 percent in September last year."

Revenue from operations during the quarter declined 3.9 percent to Rs 119.7 crore year-on-year, company said in its BSE filing.

At the operating level, earnings before interest, tax, depreciation and amortization (EBITDA) dropped 19.8 percent year-on-year to Rs 19.9 crore and margin contracted 330 bps YoY to 16.6 percent in the quarter ended December 2019.

The consequences of using standalone metrics in aviation 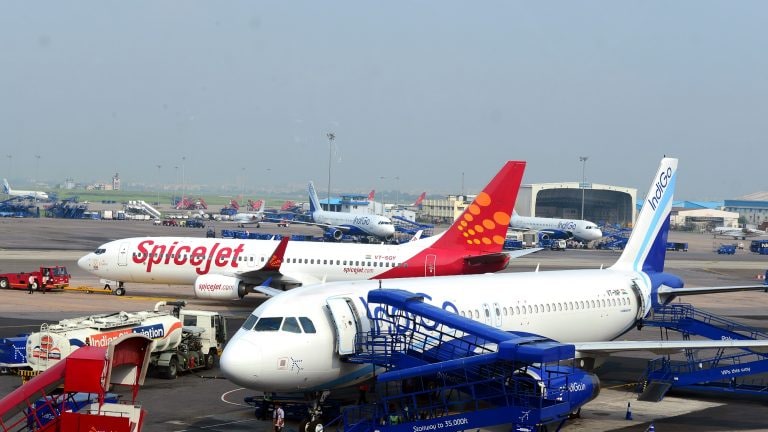 When it comes to understanding the success of Indian aviation, the consequences of using stand-alone metrics may make the final analysis inconsequential.Get latest Aviation online at cnbctv18.com

The Managing Director of Muthoot Finance company was injured after miscreants allegedly pelted his vehicle with stones on Tuesday morning. George Alexander Muthoot, who suffered head injury has been admitted to a private hospital, police said.

A section of employees have been agitating against the Muthoot management over dismissal of 160 staff from the company's 43 branches across the state in December.

The protest is being held under the aegis of the Centre of Indian Trade Unions (CITU).

The Muthoot management alleged that "CITU goons" were behind the attack that occurred at around 9 am in front of IG office here. However, the CITU rejected the allegations, saying the trade Union outfit has no role in the incident.

"We don't believe in such type of violent mode of agitation", CITU leader Ananthalavattom Anandan told media. An official of the Confederation of Indian Industries Kerala chapter condemned the incident, saying "it is a matter of great concern".

Global brokerage firm CLSA retained 'buy' rating on the entertainment company, though it slashed the price target to Rs 360 from Rs 390 apiece.

"2019 was the end of the pledging crisis and 2020 will bring operating improvements," said the brokerage house which feels Zee is well placed to continue outperforming industry growth.

CLSA said 2020's key focus for the company will be on cash generation. "We see a turn in the company's cash flows from Q4 and forecasts 11 percent earnings CAGR over FY19-22."

RBI allows banks to trade in forex outside market hours

The Reserve Bank of India on Monday permitted select banks to conduct foreign exchange trading beyond markets hours. The RBI allowed category-I banks to offer foreign exchange prices to users at all times, out of their Indian books, either by a domestic sales team or through their overseas branches.

Currently, banks are allowed to offer forex services between 9 AM and 5 PM. The order will allow forex trading round the clock.

Dealers hailed the move as a step in the right direction to help traders hedge their bets on the domestic front.

The central bank said the decision came as it accepted the recommendation of the task force on the offshore rupee market.

Valli Arunachalam, who recently asked for a board seat at the Murugappa Group, speaks to us about the entire rift against family patriarch MV Subbiah. Here's what she has to say pic.twitter.com/0yFzvqtfBx

Here's a quick recap of the Indian market performance so far

1. Indian equity benchmark indices saw a positive opening today after there was no new escalation between the US and the Middle East.

4. All Nifty50 sectoral indices trading in the green, however, Nifty Realty delivered the highest gains amongst all, a surge of 1.21 percent followed by Nifty Metal and Nifty Media.

The meeting with Home Minister Amit Shah over Air India divestment will mostly be on the lines of Preliminary Information Memorandum (PIM) on the sale process, said the sources.

The Air India Specific Alternative Mechanism (AISAM) or GoM has already approved re-initiation of the process for the government's 100 percent stake sale in Air India along with Air India Express and the carrier's stake in joint venture AISATS.

The airline’s shares have remained locked to the upper circuit filter for five sessions in a row in hopes of a rescue. On Monday, shares of Jet Airways closed nearly 5 percent higher at Rs 35.90 on the BSE.

Synergy Group emerged as the sole contender for the airline in the previous round of bidding. However, it did not submit a binding bid and sought more time.

Besides Synergy Group, banks are hopeful that two other suitors may also come forward — a Dubai-based fund and the Hinduja Group.

Jet Airways, once country's biggest private airline, stopped flying in April 2019 after running out of cash, leaving thousands without jobs.

India's government is likely to cut spending for the current fiscal year by as much as 2 trillion Indian rupees ($27.82 billion) as it faces one of the biggest tax shortfalls in recent years, three government sources said.

Asia’s third-largest economy, which is growing at its slowest pace in over six years because of lack of private investment, could be hurt further if the government cuts spending.

But with a revenue shortfall of about 2.5 trillion rupees, the government has little choice to keep its deficit within “acceptable limits”, the first official, who did not want to be named, told Reuters.

Here's more on this article.

K’taka Govt sources say Central govt’s amendment to Mining Act does not apply to @nmdclimited's Donimalai mine as decision to withdraw Donimalai lease from NMDC made before amendment, reports @MugdhaCNBCTV18 pic.twitter.com/NqxPxNIXBZ

RITES' CMD Rajeev Mehrotra speaks to us about the recent Bangladesh project, adds that the co should be able to maintain growth rate momentum going forward. Here's more#OnCNBCTV18 pic.twitter.com/wXgmUfBlSg

The Union Budget in February is the biggest and most awaited event in the Indian financial calendar. So it is worth checking how the equity benchmark indices behave in the run-up to the budget.

The highest returns the Indian market indices delivered a month before the Union Budget in the past five years was in 2015. The S&P BSE Sensex in January 2015 rallied 6.17 percent while the Nifty50 index jumped 6.47 percent.

Geopolitical tensions subside but what do the market experts have to say about this, let's check out

1. Brent has already hit $70/barrel and could rise even further

2. Oil prices continue to be the key monitorable for Indian equities

3. Iran is desperate to end sanctions and might resort to more attacks to do so

4. Trump administration unlikely to pull back if it comes to escalating tensions

5. Positive on India for the long-term

6. One needs to look at both Iran and Iraq for possible oil supply disruptions

7. Will continue to add positions in India if an opportunity presents itself

8. Government cutting expenditure is a positive sign but needs to focus on infra spending

9. Would like to see higher allocation for infrastructure in Budget 2020

10. India is right behind China in the pecking order

2. Do not think we have seen the last of geopolitical risks

3. It’s difficult to take a call on cement stocks based on fluctuations in prices

4. The Indian government has its back to the wall which could spur reforms

Market guru Ashwani Gujral of ashwanigujral.com gave his top stock picks for Tuesday's trade in an interview with CNBC-TV18. One of India’s most famous market analysts, Gujaral has been a full time trader of stocks and derivatives for more than 20 years and runs a technical analysis plus trading chat room.

Petrol price hiked by 5 paise whereas diesel prices increased by 11-12 paise across the Golden Quadrilateral pic.twitter.com/X2LYdkCS0e

US-Iran tensions: What does it mean for crude oil prices in India?

Global equity markets are roiled, currencies are in flux and oil is on the boil. The United States killing Iran's most powerful military commander, Qassem Soleimani, has put the region and investors on the edge. Markets in India felt the heat on Monday as crude oil prices hit their 14-month high.

Can the already on-the-edge tensions escalate into a full-blown war? The opinion is divided among geopolitical experts. Eurasia Group, a renowned think tank, has put the chance of a limited or major military action escalation at 40 percent. Read here for more

CNBC-TV18's top stocks to watch out for on January 7

The Indian market is likely to open higher on Tuesday on short-covering after a steep fall in the previous session. Investors will keep an eye on the global geopolitical tensions.

Among the stocks in the news today, HDFC Bank's advances in Q3FY20 grew 20 percent YoY while M&M increased its production in December by 22.5 percent YoY.

Here are the top stock to watch out for: HDFC Bank, M&M, VST Tillers amongst others