Thank you readers and before we end our live coverage of the stock markets today; here are the major trends and highlights from today's trading session:

-Indices reverse early losses to end near session highs; Nifty holds 12,250 -Sensex recovers 350 points from lows after breaching 41,300 mark -ICICI Bank biggest contributor to Nifty Bank’s gain ahead of q3 results tomorrow -Financials contribute nearly 50 percent to Nifty’s gain in today’s session -UltraTech recovers 4 percent from lows after slipping on Q3 results -Market breadth tilts in favour of advances after being flat earlier; ratio at 3:2 -All sectoral indices except Pharma & IT end in the green today -For the week, benchmarks shed 0.8 percent, midcap is the only major index w/gains
Share:

Indian Bank hits 1-month high as third quarter PAT rises 66% Shares of Indian Bank surged 5 percent to a one-month high of Rs 109.7 after the bank reported a 66 percent on-year rise in net profit to Rs 250 crore for the December quarter. The jump in the bank's bottomline was aided by other income rising over two-fold on year to Rs 1040 crore. The bank's asset quality was also stable, with gross non-performing loan ratio at 7.2 percent as on December 31, flat on quarter. So far today, 8.6 million shares of the bank have changed hands on NSE, which is higher than the three-month average daily volume of 1.9 million shares.
Share: 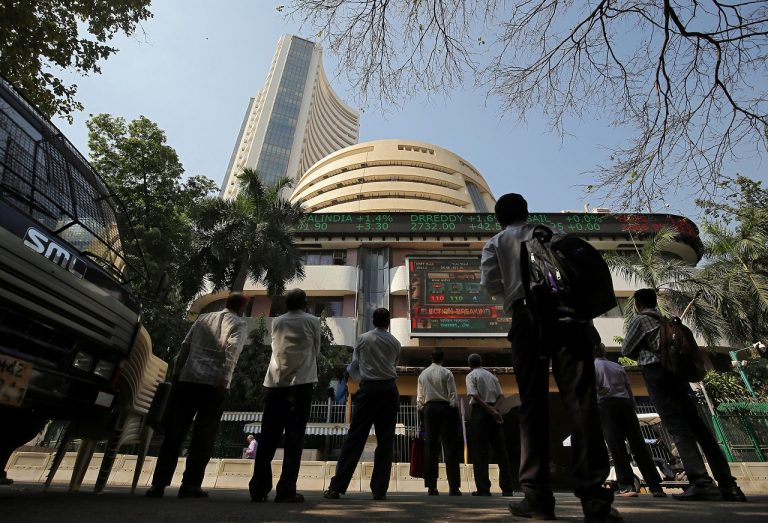 Shares of Larsen & Toubro quoted at Rs 1,359 apiece on BSE at 1.14 pm, higher by 2 percent. Get latest Infrastructure online at cnbctv18.com

During the third quarter of the fiscal year 2018-19, the company had reported a consolidated net profit of Rs 52.88 crore.

The total income of the liquor major, however, dropped 2.31 per cent to Rs 2,013.46 crore during the period under review, from Rs 2,061.12 crore earned during the same period last fiscal.

Commenting on the performance, Lalit Khaitan, Chairman and Managing Director, said: "The company continued to outperform the industry which is a testament to our robust product portfolio, strong brand equity and consumer royalty. We expect the calendar year 2020 to be better for the overall economy and Radico Khaitan is strongly positioned to capitalise on the opportunities that the IMFL industry will present."

AU Small Fin Bank jumps 13 percent on stellar Oct-Dec results Shares of AU Small Finance Bank extended gains from Thursday and jumped 13 percent to a lifetime high of Rs 1,097.90 after the lender's net profit doubled on year in the December quarter to Rs 190 crore, surpassing street estimates. Gains in the stock were also aided by an improvement in asset quality and robust loan growth during Oct-Dec. As on Dec 31, the bank's net non-performing asset ratio fell to 1.01 percent from 1.14 percent a quarter ago. So far today, 3.1 million shares changed hands on the NSE, significantly higher than the six-month average daily volume of 479,491 shares.
Share:

Sources had said market watchdog Securities and Exchange Board of India (Sebi) is likely to call for a forensic audit of books of Infosys as it continues to probe whistleblower allegations of alleged financial irregularities at the company.

Earlier this month, Infosys had said its audit committee had found no evidence of financial impropriety or executive misconduct, virtually giving a clean chit to CEO Salil Parekh and CFO Nilanjan Roy who had been accused by anonymous whistleblowers. READ MORE

Here are the edited excerpts:

1. Reviving growth has to be the topmost priority of this budget.

2. The need of the hour is to stimulate investment in capacity creation and infrastructure development, which necessitates mobilization of long-term household savings.

5. The industry can supplement the government’s efforts towards the growth objectives.

6. Some constructive steps which can create the right environment include creating a separate limit for a tax deduction in addition to Rs.1,50,000 available under section 80C and making annuities from life insurers tax-free.

7. Ensuring parity in the tax treatment of pension products across all investment platforms by providing deduction limit for life insurance pension products similar to NPS under section 80CCD and waiving GST on annuity purchased out of maturity of pension policies in line with NPS, will further aid in mobilizing long-term savings.

1.  Indian equity benchmark indices held on to the gains on Friday on the back of metal and media stocks.

YES Bank's stock price rallied nearly 10 percent intraday after State Bank of India (SBI) Chairman Rajnish Kumar had indicated that the private lender will not be allowed to fail.

Zensar Technologies shares plunged over 13 percent intraday on Friday after the small-cap IT company reported a disappointing set of third-quarter earnings this year.

During its October-December quarter consolidated earnings, the company posted a 27 percent fall in net profit to Rs 41 crore as against Rs 56 crore in the corresponding quarter last year.

The management said a combination of furloughs, project-specific customer ramp downs and continued softness in the retail vertical resulted in a soft quarter.

"Have a pipeline of products to help achieve $1 billion biosimilar target", said Biocon to CNBC-TV18

Here are the key highlights from the conversation:

2. R&D is an investment for growth  3. Believe profit share of Trastuzumab launch will reflect Q4 onwards 4. Will look to expand Pegfilgrastim into other markets with expanded capacity 5. Had received a complete response letter (CRL) on insulin glargine 6. US FDA is to re-inspect Malaysia plant in February 2020 7. Target action date indicated for insulin glargine is in mid-June 8. Have optics on how to deliver the $1 billion biosimilar revenue target 9. Have large opportunities in emerging markets & EU for biosimilars 10. Just received a $75 million injection in biologics 11. Expect to raise an additional $200-300 million for biologics 12. Look forward to an IPO in next 18-24 months 13. India must be strong on responding to the scare caused by coronavirus spread
Share:

3. Broader indices were trading in the green with Nifty Midcap100 up 0.81 percent and Nifty Smallcap 100 index up 0.77 percent.

The net interest margin was reported at a five-quarter low of 2.98 percent.

Revenue from operations declined marginally to Rs 2,074.76 crore in the December quarter of fiscal 2020.

.@Infosys says company has not received any request from SEBI to conduct further audits in relation to whistleblower allegations pic.twitter.com/e2EqLFqjSu

Will look at any entity with strong distribution and back-book, says HDFC Life Insurance on CNBC-TV18

4. Protection share has gone up but credit life has remained flat

5. Have no visibility of standard life's plan

Shares of Coffee Day Enterprises were locked at upper circuit of 5 percent on Friday after the company signed an agreement to sell brokerage services arm Way2Wealth.On the BSE, the scrip quoted Rs 33.80, up 4.97 percent against the previous close of Rs 32.20 per share.

In a regulatory filing on Thursday, Coffee Day Enterprises said that it has entered into the definitive agreement to sell Way2Wealth Securities Pvt Ltd including its certain subsidiaries to Shriram Ownership Trust.

“The transaction shall help in further deleveraging the Coffee Day Group and ensure smooth operations while safeguarding the interests of all stakeholders, including investors, lenders, employees and customers,” the company statement said.

The acquisition will be subject to the closing conditions and required statutory approvals, the company added.

Petroleum and Natural Gas Regulatory Board of India has sent a notice to Adani Gas for failing to disclose crucial information regarding a scheme of arrangement with Adani Enterprises, sources told CNBC Awaaz’s Yatin Mota.

With just over a week to go for the union budget, Rajiv Bajaj, MD, Bajaj Auto said if the auto industry has to be put back on 15 percent growth track then the government would need to do three simple things."First, this mandatory insurance that was brought into play in September 2018, should be rolled back. Second, imposing anti-lock braking system (ABS) on 150 CC or 200 CC scooters or motorcycles was a complete overkill and I would urge the government to consider recalibrating this to at least for 250 CC plus two-wheelers. Third, at a time when goods and services tax (GST) for electric vehicles (EVs) has been correctly lowered to 5 percent, we should consider lowering GST for petrol or diesel vehicles from 28 to 18 percent," he said. READ MORE

Here’s what to expect from JSW Steel earnings today Steel manufacturer JSW Steel will declare its third-quarter results today. CNBC-TV18 poll expects net profit to be at around Rs 360 crore, however, the range is very wide — from Rs 150 crore to Rs 600 crore. Topline is likely to witness a de-growth of 12 percent. Operating profit should see a contraction of around 40 percent approximately. READ MORE
Share:

2. China shut today ahead of Lunar New year holiday on Saturday 3. China yuan at 2-week lows, worst week since August  4. Gold gains to 2-week highs, on the virus outbreak concerns  5. US yields tumble to multiweek lows  6. ECB leaves key interest rates, stimulus program unchanged    Crude oil prices fell 2% on Thursday 1. The spread of the virus could lower fuel demand  2. Losses limited by a drawdown in US crude inventories by 0.4mln bls 3. Gasoline stocks in US surge for 11th week at a record high 4. US imposed Iran related sanctions on 2 individuals, 6 co’s    Copper prices at lowest in 6 weeks  1. LME copper prices down 4% this week  2. China shares register the biggest decline since May 3. China markets to close from January 24-January 31 for Lunar new year holidays 4. Nickel output in Indonesia doubled to 52.8mln tons in 2019
Share:

#3QWithCNBCTV18 | Here is the list of earnings to watch out for today pic.twitter.com/aIsVhhZy9T

Stocks made a barely positive start in early Asian trade on Friday after the world’s health body called it a little too early to declare a coronavirus outbreak a global emergency.

But worries over rapid spread of the deadly virus kept investors on guard as millions of Chinese travel during the Lunar New Year holiday period.

Trade-in Asia is already slowing down for the Lunar New Year holiday, with financial markets in China, Taiwan and South Korea closed on Friday.

CNBC-TV18's top stocks to watch out for on January 24 Indian shares are expected to open lower on Friday following muted trades in global markets amid concerns over spreading coronavirus in China.