Updated : March 29, 2019 03:38 PM IST
While the Sensex has rallied 17 percent in FY19, the Nifty surged 14 percent
Bajaj Finance is the top gainer on both Nifty and Sensex, rising 70 percent in FY19
Tata Motors was the worst performing stock, down over 45 percent

Among global peers, the Dow Jones index gained 8 percent in the last 1 year, whereas, Nasdaq and Dow Jones rose 10 percent and 8 percent, respectively, during the same period.

Foreign brokerages such as HSBC, BNP Paribas, and Morgan Stanley have turned bullish on Indian markets. HSBC has raised its rating on India from ‘neutral’ to ‘overweight’ and remains bullish on financial, metal, and consumer discretionary sectors.

Hopes of current government returning to power has also boosted the market. On a year-to-date basis, both Nifty and Sensex has risen 7 percent.

However, liquidity distress triggered by the IL&FS default in September 2018 led to a decline in midcap and smallcap indices. They recorded their worst performance since FY12.  The S&P BSE Midcap lost 4 percent, while the S&P BSE Smallcap has slipped 12 percent in FY19.

Among sectors, Nifty Bank was the best performing index on NSE, rising nearly 25 percent amid strong recover in the banking space and low-interest rates. Analysts still believe there is more room to grow in this sector.

Nifty Energy, Nifty IT, Nifty PSU Banks, and Nifty FMCG were other sectoral gainers in FY19, surging in the range of 16-25 percent. 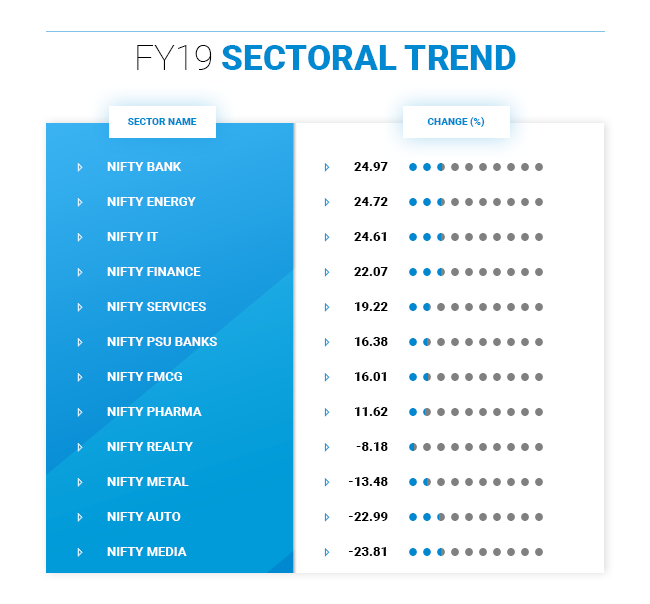 Bajaj Finance is the top gainer on both Nifty and Sensex, rising 70 percent in FY19 on the back of sustainable growth. It has surged over 350 percent in the last 3 years.

The stock of the Mukesh Ambani-owned conglomerate has gained 53 percent on Sensex in the last 1 year. It is ranked second in terms of market capitalisation on BSE with a value of Rs 8.6 lakh crore. Among losers, Tata Motors was the worst performing stock, down over 45 percent on the back of plummeting sales of JLR, downgrade by credit rating agencies and poor earnings performance. The December quarter has been weak for the entire auto sector. Tata Motors in its Q3FY19 reported a consolidated quarterly loss of Rs 26,961 crore, the biggest ever in its history.

Vedanta Indiabulls Housing Finance, HeroMoto Corp, and Eicher Motors were the other laggards on Nifty50.