Indian shares ended higher on Friday led by gains in blue-chip stocks like Reliance Industries (RIL), HDFC Bank, and TCS. In intra-day deals, RIL hit a market capitalisation of Rs 9 lakh. Crore, making it the most valued Indian firm ahead of its Q2 earnings later today. The Sensex ended the day with 246 points higher at 39,298, while the broader Nifty50 index added 75 points to end the day at 11,662.

Indian shares ended higher on Friday led by gains in bluechip stocks like Reliance Industries (RIL), HDFC Bank, and TCS. In intra-day deals, RIL hit a market capitalisation of Rs 9 lakh crore, making it the most valued Indian firm ahead of its Q2 earnings later today. It ended 1 percent higher with a mcap of Rs 8.9 lakh crore.

The Sensex ended the day with 246 points higher at 39,298, while the broader Nifty50 index added 75 points to end the day at 11,662. The Nifty Midcap advanced 2 percent, while and the Nifty Smallcap index rose 1.7 percent.  Yes Bank, Coal India, Adani Ports, Maruti and Grasim were the top gainers on the Nifty50, while Zee, Tata Motors, Bajaj Auto, Cipla, Eicher Motors, and Hindalco led the losses.

All sectoral indices, except Nifty Media, were trading in green. Nifty Realty and Nifty Metal indices gained 1.9 percent each during the day. Meanwhile, Nifty PSU Bank rose 1.4 percent, Nifty Pharma was up 1 percent and Nifty IT added 0.8 percent. Nifty Bank and Nifty Auto were also in green for the session.  However, Nifty Media lost 1 percent dragged by Zee Entertainment, which fell over 5 percent on muted Q2 results.

#Sources say Indiabulls Housing bonds traded at 42.8% yesterday, it was an error and stands cancelled. Bajaj Allianz was the seller of the bonds of Indiabull Hsg Fin and has written to the stock exchanges@kothariabhishek pic.twitter.com/y1i8pTajrg

Oil-to-telecom conglomerate Reliance Industries (RIL) is all set to announce its second-quarter results today. The stock is up 25 percent from the August lows. Also, it is less than 3 percent away from a 52-week high. The September quarter is expected to be very good for the company. Elara Capital expects the retail business to grow at a rate of 80 to 100 percent. “For retail, I expect 80-100 percent growth rate that they maintain in EBITDA and Jio around 35 percent YoY growth," Gagan Dixit, oil & gas analyst, Elara Capital, told CNBC-TV18. READ MORE

The share price of Delta Corp jumped over 7 percent intraday on Friday after investor Radhakishan Damani picked up more than 1 percent in the company.

The owner of Avenue Supermarts Radhakishan S Damani bought a 1.53 percent stake in the company, as per the September-quarter shareholding pattern.

Vermillion Peak Master Fund, which is registered with the US Security and Exchange Commission, also picked up 1.47 percent stake during the quarter. Zee Entertainment has sent escrow agreement for the next tranche of stake sale to lenders, CNBC TV18 reported, citing sources.

Escrow arrangements by the company are said to be one-sided which favours the company. The company has told the lenders that they have a ready buyer, and that the meeting with lenders is underway.

Can we say you will let go of deficit target for growth, if required? Chief Eco Adviser @SubramanianKri says, at different points in time, for short periods we would emphasise differently#CNBCTV18Exclusive pic.twitter.com/DWRZcALmNq 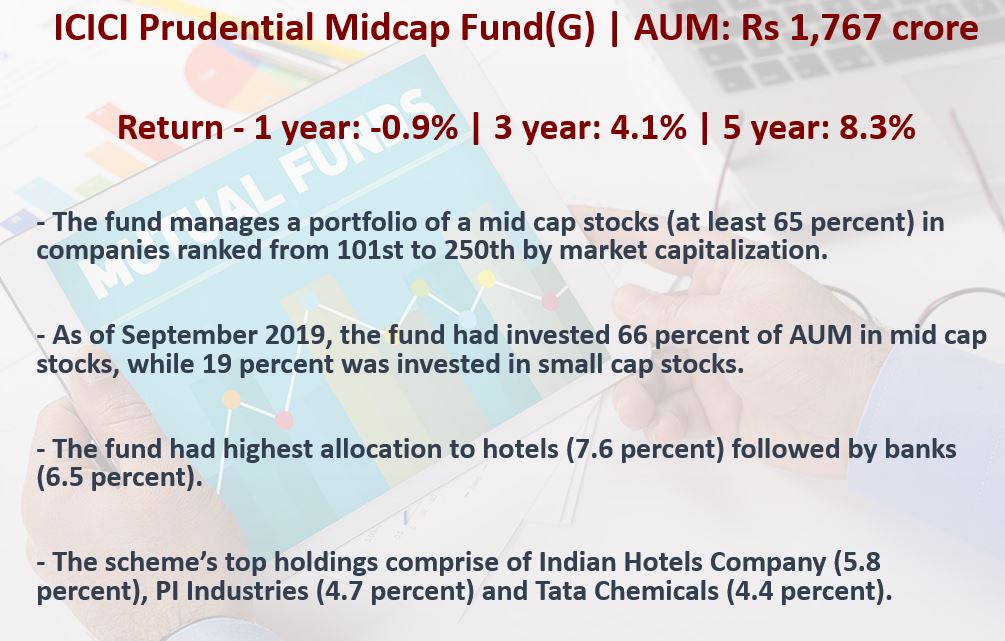 Muhurat trading for Diwali this year will be hold on October 21. IIFL Securities has picked top 10 mutual fund schemes that you can invest on the auspicious day.

#2QWithCNBCTV18 | Zee Ent says standalone statement of cashflow not approved by auditors is for 'H1FY19' pic.twitter.com/XdYFVEGhcR

L&T's shares gain after it increases stake in a subsidiary

The share price of Larsen & Toubro rose over 2 percent intraday on Friday after the company increased its stake in one of its subsidiaries.

The company has agreed to purchase its entire stake in old Lane Mauritius III in L&T Infrastructure Development Projects.

The company is going to acquire 81,90,000 shares aggregating to 2.55 percent of the shareholding from Old Lane Mauritius III Ltd at a total cost of Rs 47.997 crore. The acquisition is not a related party transaction and is done on an arm’s length basis, the company said.

Indian shares extended gains in the afternoon trading session on Friday led by the gains in PSU banks and Reliance Industries ahead of its September quarterly earnings.

Nifty Metal was the best-performing index of the day, up 1.81 percent followed by Nifty PSU Bank, Nifty Realty, Nifty Pharma and Nifty IT.

YES Bank was the top-gainer in the afternoon session, rising 6.65 percent while Zee Entertainment remained the top-loser, declining 3.42 percent.

Earnings Today: As many as 23 companies will report their quarterly earnings on Friday which include names like Ambuja Cements, Reliance Industries, L&T Technology Services, L&T Financial Holding, Sundaram Clayton, Kirloskar Ferrous, Sasken Technologies and ICICI Lombard among others.

The share price of ARSS Infrastructure rose nearly 5 percent intraday on October 18 after the company received order from Container Corporation of India.

The order size is worth Rs 76 crore, and the company's joint-venture ARSS-BDPL will have to construct handling platforms, railway track, truck parking area, buildings and other ancillary facilities for IFFCO at MMLP Paradip, Odisha.

Telcos submit their comments on interconnect usage charge to the regulator. Here are all the comments that were made;

1. Telcos seek up to 12-24 months for implementation of IUC termination

2. Telcos seek minimum of 1 year for implementation of IUC termination

#JustIn | @reliancejio continues to add users in the the range of 84-85 lakh/month while Vodafone @Idea sees an increase in the loss of users.@airtelindia, on the other hand, sees less number of users migrating to other operators pic.twitter.com/0YBNfcEXeW

In its September quarter earnings, the company reported 20 percent jump in its standalone net profit at Rs 255 crore as against Rs 211.31 crore in the same quarter last year.

Revenue during the quarter grew by 7.4 percent to Rs 2,122 crore compared to the same period last year due to lower-than-expected growth in advertising revenue (up 1.2 percent YoY) and subscription revenue (up 19 percent YoY).

Brokerages remained mixed on the stock post its Q2 earnings. While CLSA retained its 'buy' rating and raised its target price, Morgan Stanley was 'underweight' on the stock.

According to CLSA, the company's Q2 revenue was ahead of estimates led by a jump in domestic subscriptions, however, ad revenue growth was muted at 1 percent YoY given an economic slowdown.

Meanwhile, Morgan Stanley said that revenue growth and margin slightly weaker than expected, said the brokerage, adding that the stock will remain volatile until debt issues are resolved.

However, BofAML has a 'neutral' call on the stock but cut its target to Rs 360 per share. It added that incremental driver for stock is not earnings but clarity on stake sale.

Shares of 3M India snapped a three-day gaining streak, falling by a sharp 10 percent to Rs 20,610 per share after a large deal on the National Stock Exchange that saw a 1.77 percent stake in the company changing hands.

Supreme Court refuses to entertain public interest litigation (PIL) seeking relief. The court says relief, if any, has to be sought before relevant High Courts, in this matter, it's Bombay High Court.

On October 14, the Reserve Bank of India had restricted the withdrawal of deposits to Rs 40,000 crore for customers of Punjab and Maharashtra Cooperative Bank (PMC).

JustIn: US imposes tariffs on European goods worth $7.5 billion
Share:

The share price of the beleaguered hotel stock surged 37 percent in two days with 2 consecutive upper circuits on news that the company has received total consideration from Brookfield. They indicated in the postal ballot notices to the exchange that the business has been acquired by Brookfield.

The total consideration payable to the company with respect to the transactions set out in the postal ballot notices has been received and paid to the various banks and financial institutions who were lenders of the company.

While this is a positive for Hotel Leela, as we saw in the next course of action – where the lenders have released pledge on 25.28 percent equity, it’s a bigger positive for the various banks and financial institutions who were lenders of the company.

Oil-to-telecom conglomerate Reliance Industries (RIL) is all set to announce its second-quarter results on Friday. The stock is up 25 percent from the August lows. Also, it is less than 3 percent away from a 52-week high. The September quarter is expected to be very good for the company. Here's what to expect:

1. The consolidated profit is expected to rise 8 percent.

2. The refining business has seen an improvement. So, the gross refining margins are seen risen to $9.5 per barrel versus $8.1 per barrel last quarter. That will result in an EBITDA bump up as well. Read more

BSE Heatmap Update: 20 out of 30 BSE stocks are trading in green

Nifty Sectoral Indices Update: Nifty Media is the only sector trading in red, down 1.24% 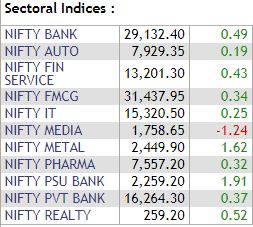 The share price of Bharat Heavy Electricals Limited's rallied over 26 percent on reports of government divesting stake in the company.

According to the sources of CNBC Awaaz, the government may bring down its stake in state-owned BHEL and NMDC.

Indiabulls Housing Finance shares rallied 8.3 percent in early trade on Friday, continuing its uptrend after the mortgage lender offered pre-mature redemption of all non-convertible debentures (NCDs) maturing in November and December this year.

In a stock exchange filing, the company said it will also evaluate further pre-mature redemption of its NCDs from time to time.

"The Company hereby issues an offer to all Debenture holder(s) for pre-mature redemption of its NCDs maturing in November and December 2019 at par," the filing said. Read more

Indian equity benchmark indices opened in red on Friday after amid cautious trades in global markets in the wake of the Q2 earnings season.

All Nifty50 sectoral indices were in red except Nifty IT. Nifty Media was the worst-performing sector, down 1.13 percent.

Asian markets traded in red after China's domestic GDP came in at 6 percent, worst-than-expectations after demand at home and abroad faltered amid a bruising US-China trade war.

US-China trade war continues to remain another concern for the global markets. The International Monetary Fund has warned the U.S.-China trade war will cut 2019 global growth to its slowest pace since the 2008-2009 financial crisis but said output would rebound if their dueling tariffs were removed.

The dollar index, which tracks the greenback against a basket of six major rivals, was barely lower at 97.596.