Indian shares pared morning gains to end flat on Friday after hitting record highs for the fourth straight session in intra-day deals. While buying was seen in banking stocks, autos witnessed selling during the day.

- Nifty Bank Up Over 1 percent, Midcap Index Flat For The Week

Indian shares pared morning gains to end flat on Friday after hitting record highs for the fourth straight session in intra-day deals. While buying was seen in banking stocks, autos witnessed selling during the day. Gains in heavyweights like HDFC Bank, SBI, and ICICI Bank were capped by losses in Kotak Bank, Reliance Industries, ITC, and HDFC.

The BSE Sensex ended 8 points higher at 41,681, while Nifty settled 12 points higher at 12,272. During the week, the indices hit a record high for 4 out of 5 sessions. Both benchmark indices Sensex and Nifty gained over 1.5 percent each for the week.

In intra-day deals, the Sensex rose as much as 136 points to hit a new high of 41,809.96, while the Nifty50 index gained 34 points to hit a fresh high of 12,293.90. The rally was driven by gains in state-run banks as investors cheered a central bank decision to conduct a special open market operation to bring down long-term yields. 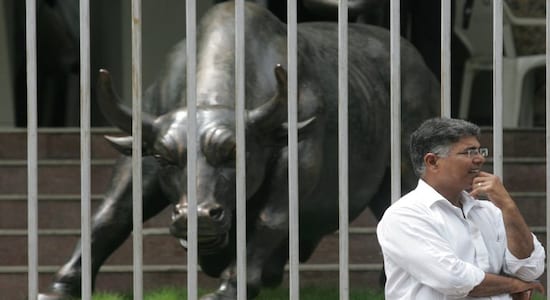 Key highlights from the report are:

- Expect growth to slow to 4.6 percent in FY20, from 6.8 percent in FY19
- Expect growth to gradually recover to 5.6 percent in FY21 and 6.5 percent in FY22
- Expect growth recovery with support from easing monetary, fiscal policy & structural measures
- Outlook on India's GDP growth still solid against that of peers
- Affirmation of ratings incorporates expectation of moderate fiscal slippage vs govt target of 3.3 percent of GDP in FY20
- Govt again facing a trade-off between stimulating economy and reducing deficit in the medium term
- Deceleration of nominal quarterly growth suggests further revenue pressure for rest of FY20
- Risk of more significant fiscal loosening in the event of continued weak GDP growth
- Expect general govt debt level of 70.4 percent of GDP in FY20; general government deficit of 7.5 percent  of GDP
- Consider it highly unlikely that govt will comply with general govt debt ceiling of 60 percent of GDP by FY25
- Expect the RBI to cut its policy rate by another 65 bps in 2020
- Positive impact of recent govt reforms likely to materialise in the medium term, rather than near term
- A shake-out and return of confidence in NBFC sector will take time, may involve failure of some weak NBFCs
- Indian banks generally have thin buffers to deal with continued systemic stress in the NBFC sector
- Estimate banks are USD 7 billion short of the capital required
- Banks’ NPLs could build up again in the current weak economic environment

According to a PTI report, 19 properties -- 12 residential and seven offices -- of the company, known as Dishman Group, were searched in Ahmedabad and around the city.

The group mainly manufactures bulk drugs, APIs and is also involved in 'contract research' and manufacturing.

"The improved operating performance of group companies and recent stake sale are reassuring. Share pledges are stagnated and can decline meaningfully on stake-sale transactions. The balance sheet allows big additions to the business portfolio beyond Gujarat ports. Its outperformance in Gujarat brightens the prognosis for near-term financials," the research firm said.

The brokerage has a buy call on the stock with a target price at Rs 450 per share, implying a 21 percent potential upside from current levels.

In a setback for telecom companies, the Digital Communications Committee (DCC) has decided on Friday not to cut spectrum prices in line with the recommendation from the Telecom Regulatory Authority of India, sources told CNBC-TV18.

Telecom companies had constantly requested the regulator and the Department of Telecommunications to reduce prices of the spectrum.

The DoT had referred the issue back to Trai. However, the regulator had insisted that they would send the prices back at the same levels with no cuts.

In the DCC meeting, which took place today, the resolution that has been passed with the understanding of the core members is that there will be no cut in spectrum prices as recommended by the TRAI.

In October, Ravi Shankar Prasad, minister of communications and electronics and information technology, stated that he was confident that spectrum auctions will be conducted within this financial year.

According to sources, it is incredibly unlikely to have these spectrum auctions in this current financial year and that it is likely in the month of May.

3. Nifty PSU Bank was the best-performing index in this trading hour, up 2.18 percent while Nifty Pharma was trading lower by 0.11 percent.

Uday Kotak is planning to pare down his stake in Kotak Mahindra Bank,  CNBC-TV18 has learnt. According to the sources, talks are on with large foreign institutional investors for promoters' stake sale to pare down anywhere between 5 percent and 10 percent in the bank.

According to the RBI regulation, a promoter can hold up to a 20  percent stake. As of September, Kotak held a close to 30 percent stake. Uday Kotak had challenged RBI’s objection to the issue of preferential shares for promoter equity dilution. However, that the matter is still subjudiced and RBI has also levied a penalty of Rs 2 crore for non-compliance.

However, the bank's management in response said that as the matter is subjudice, they will not make comment on it.

RBI’s guidelines allow banks in the private sector to form a non-operative financial holding company (NOFHC) where a NOFHC can hold the stake in the bank, as well as, its other financial entities such as insurance, mutual funds(MFs), etc.

The shares of CRISIL hit a 52-week high on Friday after the company board approved 100 percent acquisition of Greenwich Associates LLC and its subsidiaries.

The acquisition is at a consideration of USD 40 million. The company believes that the acquisition will complement CRISIL' s existing portfolio of products and expand offerings to new segments across financial services.

The deal will accelerate CRISIL's strategy to be the leading player in the growing market of global benchmarking analytics, the BSE filing said.

Exceeding its guidance of 5-8 percent growth in Q1FY20 by $160 million, Accenture grew by 7 percent in dollar terms, giving a good start to FY20.

However, brokerage Nirmal Bang in a report stated that it remained cautious on Indian IT sector, adding that the leading performance of Accenture should not be extrapolated to the Indian players.

Here's a detailed report on this.

Defaults, bankruptcy, shrinking balance sheets. 2019 was a perfect storm for the non-banking finance companies, that continued to reel under the fallout of the IL&FS triggered a crisis.

As per a recent Crisil report, the growth in assets under management of non-banks, including NBFCs and housing finance companies, is set to hit a decadal low of 6-8 percent for this fiscal, compared to 15 percent in FY19. Read more here.