CNBC-TV18 Market: Indian shares settled Wednesday's trade with marginal gains supported by financials, IT and energy shares. The Sensex ended a tad below the 38, 600 mark, while the Nifty50 closed at 11464. Bajaj Finance shares ended as top Sensex gainer, rising almost 4 percent. Here are the main highlights from the stock markets today:

The BSE Sensex closed 93 points higher, or 0.24 percent, to settle Wednesday's trade at 38,599. The NSE Nifty50 also added 36 points, or 0.31 percent, to close at 11,464. Both the Nifty MidCap100 and BSE MidCap indexes underperformed, slipping by up to 0.15 percent. Among sectors, IT, finance, pharma and consumer durables advanced, while bank, FMCG, auto, metal and capital goods declined. Among Nifty gainers, BPCL, Bajaj Finance, ZEEL, Grasim and ONGC rose by up to 4.3 percent. Hero MotoCorp, Vedanta, Hindalco, Asian Paints and NTPC declined by up to 3 percent. Share Khan in its report said that the correction in the broader markets has been quite severe in the last one year.

Only this stock in the Nifty Realty index gave negative returns in the last 3 years In the recent years, the Narendra Modi-led government has introduced major reforms such as Real Estate (Regulation and Development) Act, Goods and Services Tax (GST), Insolvency and Bankruptcy Code and Benami Transactions (Prohibition) Act, to support the real estate sector struggling with dwindling sales, high inventory and price stagnation. The GST council has also done away with the input tax credit (ITC) and reduced the GST rate for under-construction flats to five percent from 12 percent and for affordable housing to one percent from eight percent, from April 1, for all new projects. READ MORE
Share: Here's a quick round up of what has so far happened in the markets today -Indian shares trade flat, giving up early morning gains as metal and auto stocks weigh on indices.

-The BSE Sensex advanced over 150 points on Wednesday morning driven by gains in energy and banking stocks amid sustained fund inflow and positive cues from global equities. The broader Nifty also gained 47 points to trade at 11,461.55 points in the morning.

-Shares of Multicommodity Exchange of India (MCX) gained 9 percent on Wednesday on robust Q2 results. The sentiment was also bullish after global brokerage Morgan Stanley raised the stock's target and said that it expects the price to double in three years.

Bharti Airtel has been in focus since the launch of Reliance Jio in 2016 which disrupted the telecom market. Despite that, the stock has risen nearly 29 percent since then. In the last one year, the scrip has gained 45 percent and 33.6 percent in 2019. The stock has risen over 12 percent since last week after Reliance Jio said it would charge 6 paise per minute on off-net calls. The move, analysts believe, would be viewed as sentimentally positive for the telecom companies. Most analysts were bullish on the stock post this development. Read more

Vodafone Idea’s demerger with Vodafone Towers for transfer of fiber infrastructure has become effective. The fiber infra undertaking of the company stands demerged. Fitch Ratings has downgraded Jain Irrigation Systems' long-term ratings (IDR) to RD from CCC- , and the rating on its USD200 million 7.125 percent senior unsecured notes due in 2022 to C from CCC- with a recovery rating of RR4.

Inflation is your enemy: Here is a quick look at its impact on your savings Just keeping money or investing it where the returns are lower than the rate of inflation will reduce your purchasing power over a period of time.Get latest Personal Finance online at cnbctv18.com PNB Housing Finance will consider issuance of non-convertible debentures up to Rs 10,000 crore on October 24. 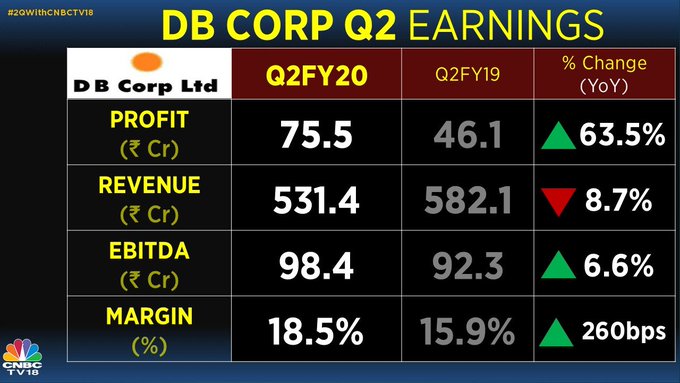 Indian equity markets erased marginal gains on Wednesday afternoon. The broader trade sentiment remained cautious as investors watch September quarter earnings for companies after the government's corporate tax cut, amid a rise in inflation and hopes of further rate cuts from the Reserve Bank of India. At 12.38 pm, the Sensex traded 96 points higher, or 0.25 percent, at 38,603 while the Nifty50 added 35 points, or 0.31 percent, to trade at 11,463. Among sectors, bank, IT, finance, pharma and IT advanced, while FMCG, auto, metal, capital goods and consumer durables declined. Among shares, ZEEL, BPCL, Grasim, Bajaj Finance and Wipro were top gainers, while Hindalco, Vedanta, Hero MotoCorp, Adani Ports and Power Grid were top laggards.

The stock price of ACC surged 4 percent intraday on Wednesday after the company reported robust earnings in the second quarter of the current financial year. At 12:45 pm, the share price of the stock was up 1.60 percent at Rs 1,522 per share on the NSE. Intraday, the stock surged 4.13 percent to Rs 1,560.

The cement manufacturer reported a 45 percent rise in consolidated net profit at Rs 302.56 crore for the third quarter, meanwhile, net sales stood at Rs 3,464.43 crore as against Rs 3,363.93 crore in the year-ago.

Earnings Today: About 11 companies are scheduled to report their corporate earnings today, including Mindtree.
Share:

SBI Life Insurance's shares hit record-time high on Wednesday after brokerages maintained buy call on the stock post Q2 earnings. At 12:09 am, the stock price was trading higher by 3.93 percent to Rs 871 per share on the NSE. In intraday, the shares rose 4.77 percent to Rs 878.

Prabhudas Lilladher also maintained buy rating on the stock with a target price at Rs 991 led by strong growth contribution non-par savings like annuity, guaranteed and individual protection, and consistent improvement in the margin at a pace of 80-90 bps each quarter.

The share price of Multicommodity Exchange of India (MCX) gained 9 percent on Wednesday on robust Q2 results. The sentiment was also bullish after global brokerage Morgan Stanley raised the stock's target price and said that it expects the stock price of the company to double in 3 years.

The brokerage raised its target price for the stock to Rs 1,365 per share from Rs 1,260 earlier on higher fee realization and lower operating costs. The brokerage maintained its 'overweight' rating.

The public interest litigation (PIL) raises a red flag on the PMC Bank issue and seeks an urgent hearing from the Supreme Court. The PIL also seeks the protection of saving for 15 lakh depositors. The Supreme Court agrees to hear the PIL on October 18.

US FDA completes the inspection of Indoco Remedies’ Goa (Plant II) with 2 observations. The company says neither of these is related to data integrity or the core quality management system. The site continues to maintain its VAI status. At 11:07 am, the share price was trading 3.36 percent to Rs 146 per share on the NSE. Intraday, the shares rallied 12 percent to Rs 158.20.

BPCL's stock price rallied 5.53 percent intraday on Wednesday after reports suggested that Saudi Aramco is interested in buying the government's 53.3 percent stake in the company. The strategic sale of BPCL could take place at Rs 510-1,000 a share, as per the reports. The stock remained the top Nifty gainer in the early morning session.

The share price of Inox Wind jumped 13.29 percent intraday on Wednesday after the company signed an additional deal with Adani Green Energy. The company in its press release said that it has closed the deal for a sale of 50 MW wind project in Kutch in which Adani will be a strategic investor.