CNBC-TV18 Market Highlights: The Indian equity benchmark indices extended gains on Tuesday led by the strong buying in auto and metal index. Global markets also fared well on the back of positive trade talks between US-China and investors looked toward a Federal Reserve rate cut later this week.At 3:30 pm, the Sensex closed higher by 590.45 points or 1.50 percent at 39,840.65 while Nifty50 closed at 11,790.35, higher by 163.20 points or 1.40 percent.Nifty Auto remained the outperformer of the day, rallying 4.40 percent followed by Nifty Metal which rose 3.95 percent.

The Indian equity benchmark indices extended gains on Tuesday led by the strong buying in auto and metal index. Global markets also fared well on the back of positive trade talks between US-China and investors looked toward a Federal Reserve rate cut later this week.

The share price of Bharti Infratel extended declines for the fourth consecutive session since the Supreme court's rejection of AGR (adjusted gross revenue) definition. The telcos' will have to pay penalty and interest, the Supreme Court had said in its order last week.

#Exclusive govt sources tell CNBC-TV18's @TimsyJaipuria that the Ministry of Corporate Affairs is likely to recommend an SFIO probe in DHFL soon.

The stock price of YES Bank surged over 9 percent on Tuesday amid reports that the company is mulling way to raise funds. At 1:59 pm, the stock was up 8.04 percent at Rs 59.15 per share on the NSE while in intraday, the shares jumped 9.40 percent at Rs 59.90. The stock advanced 23 percent in three days.

Nifty50 Sectoral Indices: All sectors remain in the green

All Nifty50 sectoral indices were trading in the green on Tuesday with Nifty Metal as the best-performing index as it rose over 4 percent. Nifty Auto was the second-best performing index, surging 3.7 percent on the back of strong gains in Tata Motors. 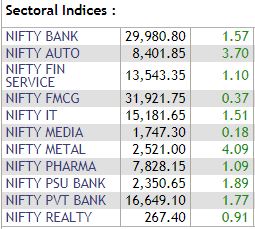 BSE Heatmap Update: 27 out of 30 BSE stocks trade in green

At 1:30 pm, 27 out of 30 BSE stocks were trading in green and only 3 remained in the red including Power Grid, Kotak Mahindra Bank and Bharti Airtel.

Saudi Aramco to come up with its IPO

According to the sources in Reuters, Saudi Aramco is targeting to kick off it's initial public offering (IPO) on November 3. The state oil giant working is towards an announcement for the proposed float this Sunday, said the sources.

Nifty Metal remained the best-performing sector, up 3.66 percent followed by Nifty Auto which was up 3.22 percent. Nifty FMCG was the only sectoral index trading in the red.

The stock price of Reliance Industries touched 52-week high on Tuesday after analysts' remained for positive on the company's move to restructure and streamline its telecom and digital businesses.

Here's what brokerages have to say about this stock.

Buy call, target at Rs 1,710/share
Repositioning Jio as a digital major ahead of a potential stake sale
Indicative OCPS conversion price suggests a value of $65-70 billion for digital business
Cleaner structure may be a precursor to stake monetization in the digital business

Buy rating, target raised to Rs 1,645 from Rs 1,500/share
New subsidiary created for holding all digital assets
The reorganization has no implications for cons of net debt
Management expects the simplified structure to better leverage Jio’s 355 million mobile sub base
Simplified structure to help facilitate a strategic investment
Co could be looking at not-so-distant timelines for unlocking value in Jio

Reliance Industries, ICICI Bank, Granules India, GlaxoSmithKline Pharmaceuticals, Pfizer and SBI Life Insurance Company are among the 69 companies that hit their 52-week highs on BSE so far on October 29.

From @CNBC_Awaaz: Govt reviews equity-related tax rate rationalisation, may look for one tax rate than multiple rates. PM will decide on timing of the announcement, reports @RoyLakshman attributing sources pic.twitter.com/LdzzEWCoQB

GVK Power's shares hit the upper circuit on Tuesday after three global firms agreed to invest in the company.

These three global firms have agreed to invest Rs 7,614 crore in the company’s airport business as the company looks to retire debt.

The share price of Marico extended declines for the second consecutive session on Tuesday. The stock fell over 7 percent to Rs 363.80 per share on the NSE after the company's earnings missed estimates.

In an exclusive interview to CNBC- TV18, Kishore Biyani of Future Group says that Diwali sales picked up later than expected

Kishore Biyani of Future Group said, "To save 600-650 crore on lease expenses by taking Future Enterprises assets into future retail. I don't think Future Group needs to give more discounts for further sales."

He further says that Onam onwards the sales have been good. Diwali sales picked up later than expected, and food & fashion verticals have done well.

In a strategic move to accelerate its foray into the data center domain, the Adani Group (“Adani”), a $13 billion integrated business conglomerate in India, today announced it is partnering with San Francisco-based Digital Realty.

The A320neos to face grounding in case of non-compliance pic.twitter.com/T8RnBeojZ0

The stock price of Bharti Infratel plunged over 8 percent on Tuesday after the Supreme Court  ruled in favour of the government on the AGR (adjusted gross revenue) issue,

The government and the telecom sector were locked in a fight over the definition of AGR.

Bharti Airtel said it was ‘disappointed’ by the verdict, which will ‘further weaken the viability of the sector as a whole.’

“We are disappointed by the verdict of the Hon’ble Supreme Court…This decision has come at a time when the sector is facing severe financial stress and may further weaken the viability of the sector as a whole,” an Airtel spokesperson said in a statement Thursday.

The share price of Tata Motors rallied 16 percent intraday on Tuesday ever since the auto company reported its July-September earnings.

Homegrown auto major on Friday reported a consolidated net loss of Rs 187.7 crore for the quarter ended September 30, hit by subdued demand for its vehicles in the domestic market. The company had posted a loss of Rs 1,009.49 crore in the same period of 2018-19.

Total revenue during the period under review stood at Rs 65,431.95 crore as against Rs 71,981.08 crore in the year-ago period, Tata Motors said in a regulatory filing.

"JLR has returned to profitability and revenue growth. This is a testament to the fundamental strength of our business, our award-winning products, new technologies, and operating efficiencies," JLR Chief Executive Ralf Speth said.

Around 30 companies will report their Q2 earnings tomorrow. The big ones in line are Ramco Cements, Tata Chemical, Tata Global Beverages, and CONCOR.

The Indian market opened flat on Tuesday tracking gains in the global markets.  Tata Motors continued to surge since the release of its Q2 earnings.

Nifty Auto remained the best-performing sector, rising 1.65 percent led by Tata Motors, which is up over 7 percent intraday.

Telecom major Bharti Airtel on Tuesday deferred announcing July-September earnings on account of the AGR verdict by the Supreme Court. The company said that more clarity is needed on the AGR matter

Bharti Airtel approached the department of telecom by Supreme Court., and will request the DoT support to deal with adverse outcomes.

On October 29, the Indian market will open after an extended Diwali holiday. The stocks that likely remain to be in the limelight today are ICICI Bank, Reliance Industries, Tata Motors, M&M, telecom stocks along with others.

Most brokerages said State Bank of India (SBI) is a 'buy' after the bank announced an operationally good quarter. ICICI Bank saw strong deposit growth leading to 'buy' or 'overweight' calls from most brokerages.

1. Trouble at Infosys and disclosure dilemma: There is no straightjacket formula in place: As events unfold, Infosys, once India’s IT dream, is at the helm of public and regulatory scrutiny for whistleblower complaints alleging unethical practices   adopted by C-Suite employees, material accounting irregularities and withholding of information relating to financials and commercial deals from auditors and Infosys board. Read the whole article here.

2. Commerce ministry, CBIC discuss fiscal sops linked to job creation, investments: Two key economic departments of the government are discussing a set of policy moves, which if approved, could lead to more fiscal sops and ease of payment procedures for factories and enterprises. Here's a brief explanation of the recommendations.

Here is what happened in the world while you were sleeping

Alright, let us prep you quickly with everything that you should know before the market opens.

The Indian market is expected to open positive on Tuesday tracking strong gains in the global markets after US-China trade deals reflected the positive outcome.

US markets: The S&P 500 hit a record high on Monday, while the Nasdaq fell just short of its lifetime high touched in late July as a more civil tone between the United States and China lifted hopes for a possible trade deal and investors looked toward a Federal Reserve rate cut later this week.

Crude Oil: Oil prices edged lower in quiet trade on Tuesday as concerns about slower economic growth overshadowed signs of a thawing in the trade war between Washington and Beijing, while investors awaited U.S. inventory data.

To read all about it: check out this article- 10 Things To Know Before The Opening Bell On October 29

First up, here is a quick catchup of what happened in the markets on Friday.

The benchmark indices, the BSE Sensex and NSE Nifty50, ended Friday's trading session with gains amid mixed domestic cues. TCS remained the top-performer of the day, rising 2.06 percent higher while HDFC was down 1.87 percent. Nifty Bank settled 0.99 percent higher. So far, the index has gained over 8 percent.

Good morning, readers! This is Mousumi Paul. I am a copy editor at CNBCTV18.com.

Welcome to our market blog, where we provide rolling live news coverage of the latest events in the stock market, business and economy. We will also get you instant reactions and guests from our stellar lineup of TV guests and in-house editors, researchers, and reporters.

If you are an investor, here is wishing you a great trading day.

If you are in need of some inspiration, here is this great quote from Warren Buffett to get you started. Good luck!