The Sensex and the Nifty50 continued to rise for a second straight day on Thursday amid across-the-board buying, with heavyweights Reliance, Infosys and the HDFC twins being the biggest movers.

Indian equity benchmarks continued to recover for a second straight session on Thursday amid buying across sectors, boosted by strength in heavyweights Reliance, Infosys and the HDFC twins. HCL Tech shares saw cautious gains as investors awaited the software exporter's financial results due later in the day. Investors' wealth increased by Rs 3.5 lakh crore as the market capitalisation of BSE-listed companies increased to Rs 271.8 lakh crore, according to provisional exchange data. They made Rs 5.7 lakh crore in two days.
Reliance, Infosys, HDFC, HDFC Bank and TCS together contributed more than 500 points to the gain in Sensex.
Reliance shares rose by Rs 63.8 or 2.5 percent to end at a record Rs 2,782.2  apiece on BSE. The stock was the biggest boost for both main indices.
Coal India shares moved 3.9 percent higher to Rs 206.9 -- rising for the fifth session in a row -- on the back of rising demand for the dry fuel. 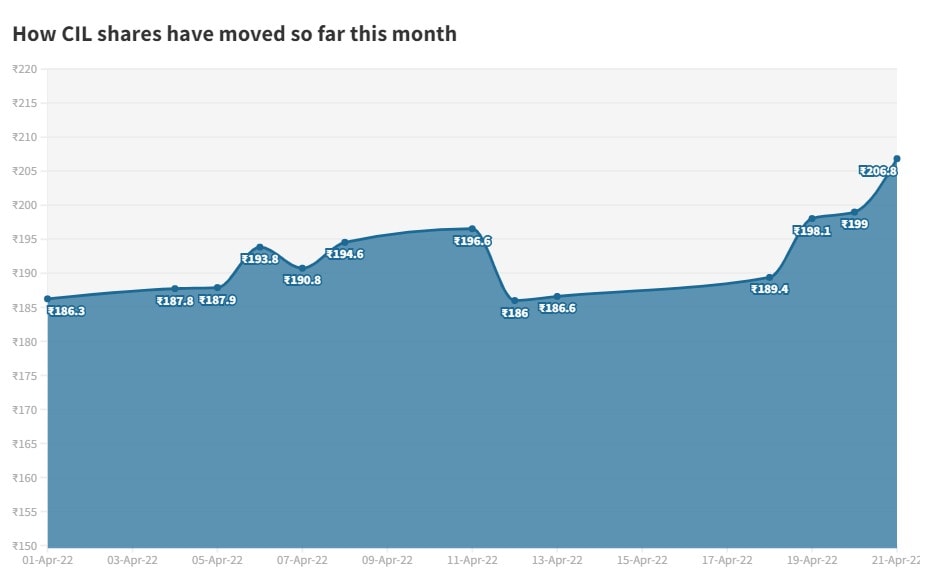 HCL Technologies shares climbed up 0.9 percent as investors awaited the IT company's quarterly results due later in the day. The Nifty IT index rose 1.4 percent, also boosted by a 1.8 percent rise in TCS and Infosys each. The Nifty Auto finished 2.2 percent higher to emerge the biggest gainer among NSE's sectoral gauges.
Broader indices mirrored the overall strength in the market. The Nifty Midcap 100 moved 1.1 percent higher for the day, and its smallcap counterpart 1.6 percent.
In the midcap and smallcap segments, Angel One, PNC Infratech, Phillips Carbon and RailTel -- surging around 6-18 percent -- were among the top gainers. On the other hand, ICICI Securities, Kalpataru Power, Gujarat Pipavav and Advanced Enzyme -- declining 2-5 percent -- were among the top losers.
Overall market breadth favoured the bulls with an advance-decline ratio of 5:2, as 1,477 stocks rose on NSE and 580 fell.
Global markets
European shares began the day in the green, shrugging off weakness in most other Asian markets, as the focus shifted to French elections. Besides, news flow on the Russia-Ukraine war and rising COVID cases in parts of the world remained on investors' radar. The pan-European Stoxx 600 index was up 0.8 percent in early hours.
S&P 500 futures were also up 0.8 percent, suggesting a higher opening ahead on Wall Street.
Disclaimer: Network18, the parent company of CNBCTV18.com, is controlled by Independent Media Trust, of which Reliance Industries is the sole beneficiary.
Catch highlights of the day with CNBCTV18.com's market blog
(Edited by : Sandeep Singh)
Check out our in-depth Market Coverage, Business News & get real-time Stock Market Updates on CNBC-TV18. Also, Watch our channels CNBC-TV18, CNBC Awaaz and CNBC Bajar Live on-the-go!