The Sensex and Nifty registered weekly gains of more than one percent for a second straight time. Strength in oil & gas and IT shares pushed the headline indices higher, though weakness in banking names limited the upside.

Indian equity benchmarks made a second back-to-back weekly gain of more than one percent each. Oil & gas, IT, consumer and automobile spaces were pushed the headline indices higher, though losses through the banking pack played spoilsport.
A broad-based comeback on Dalal Street at the end of the first full trading week following the Diwali week helped both Sensex and Nifty recover all of their weekly losses.
For the week ended November 12, the Nifty50 index gained 186 points to shut shop at 18,102.8 and the leaner, 30-scrip Sensex gauge added 619.1 points to settle at 60,686.7.
The Nifty Midcap 100 finished the week 1.5 percent higher, and its smallcap counterpart 1.3 percent.
Highlights of the week gone by
The quarterly earnings season reached its final leg, with the release of financial results by companies such as Mahindra & Mahindra, Pidilite, Britannia, Bank of Baroda, Zee, Aurobindo Pharma and Tata Steel.
It was a busy week for the primary market, with the initial share sale of One97 Communications (Paytm) sailing through, but receiving a tepid response from investors. Paytm's IPO is the largest of all time in India. Nykaa made a strong entry into the secondary market, becoming the latest of new-age businesses tapping the capital market.
Foreign institutional investors remained bearish on Indian equities, dumping shares worth a net Rs 110.9 crore ($16.5 million) this week.
Globally, fears about surging inflation had investors worrying about its impact on the pace of interest rates going forward. Data from the US showed consumer prices in the world's largest economy jumped at their highest rate recorded since 1990. An inflation stickier than expectations could lead to central banks tightening monetary policies at a sooner-than-expected pace.
Chinese property developer Evergrande once again averted a default with a last minute bond payment, sending its shares to a more than six-week high.
Evergrande has been stumbling from deadline to deadline in recent weeks as it grapples with more than $300 billion in liabilities, $19 billion of which are dollar bonds, according to Reuters.
Winners and losers
The Nifty Oil & Gas index was the biggest weekly gainer among NSE's sectoral gauges, rising 3.5 percent. The IT, consumer durables, auto and metal indices were next, rising 0.5-2.8 percent.
Banking stocks, from both private as well as public universes, saw selling pressure. The Nifty Bank took a hit of 2.1 percent for the week. The Nifty Private Bank and PSU Bank indices dropped 2.5 percent and 1.4 percent respectively. 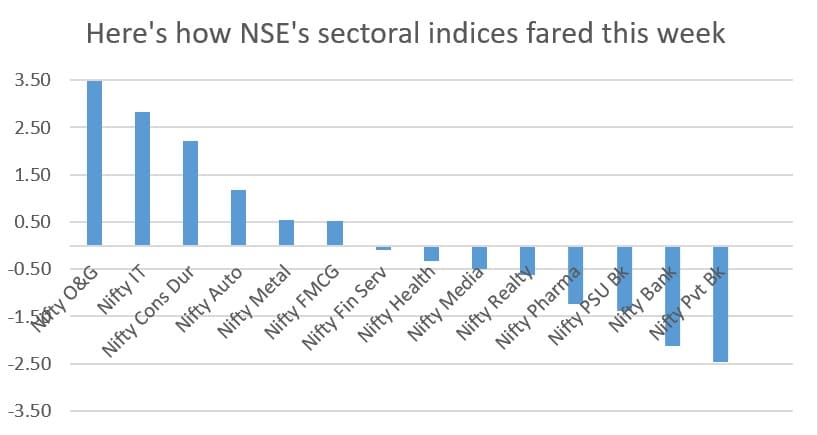 "The domestic market regained momentum at the end of the week due to the sectors least impacted by inflation, such as IT, and volume growth, reforms, supportive monetary policy, good quarterly earnings and strong domestic macroeconomic data points," said Vinod Nair, Head of Research at Geojit Financial Services.
In the Nifty50 universe, as many as 31 scrips finished the week higher.
Mahindra & Mahindra, Bharti Airtel, Tech Mahindra, Adani Ports, Titan, UPL, Infosys and Bajaj Finserv were among the top gainers. On the other hand, IndusInd Bank was the top laggard, down 12.8 percent. Divi's Laboratories, Maruti Suzuki, Bajaj Auto, Tata Steel, HDFC Bank and Axis Bank were among the other losers.
Nifty gainers
Nifty losers
In the Nifty Midcap 100 and Smallcap 100 packs, Adani Gas, BEL, Prestige, KPIT Tech and Prince Pipes -- rising between 8.6 percent and 23.2 percent -- were the biggest gainers. On the other hand, Laurus Labs, BHEL, Sun TV, Balaji Amines and Firstsource -- falling between 7.4 percent and 13.8 percent -- were among the top losers.
A total of 274 scrips on BSE 500 -- the broadest gauge on the bourse -- saw weekly gains.
Note To Readers