Why are PSU bank stocks rallying and can the party go on?

Why are PSU bank stocks rallying and can the party go on? PSU banking stocks have beaten not just Nifty50 but also Bank Nifty by a wide margin. But the question is: Can the party go on?

State-run lenders' shares have beaten the overall banking space by a wide margin on Dalal Street of late. For instance, SBI has rewarded investors with a return of 138 percent in the past one year, ahead of Bank of Baroda's 96 percent. In the private sector pack, shares of HDFC Bank, Kotak Mahindra Bank and ICICI Bank have given increased 41-82 percent in value. 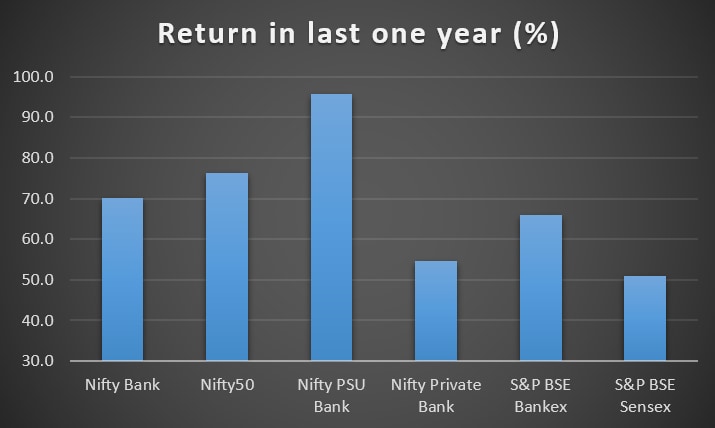 Banking has materially remained among the top movers of the market. But within the overall banking basket, PSU lenders exceed their private counterparts again by a huge margin.
What is driving the gains in PSU banking shares?
Brokerage Kotak Securities has said a recovery in the economy gives more confidence on the commentary by banks on their collection efficiency levels. Besides the resolution of a very large non-performing loan (Dewan Housing) has probably aided this performance, it said in a note on September 30.
Kotak Securities also said that payment data suggests that a gradual, though not sharp, recovery in the economy is underway. "The key challenge to convince, outside of asset quality, continues to remain on loan growth, which has not bounced back like the other segments within the financial services space. It is sluggish since COVID with negligible growth from the corporate segment and a marginally better performance on the retail side," it added.
The brokerage finds the overall banking sector attractive at the current juncture.
It also said the interest rate environment is favorable for the banking space, but expansion of the net interest margin (NIM) unlikely. Net interest margin is a key metric of profitability for banks which measures the difference between interest income and interest expenses.
ALSO READ: Geosphere Capital cautious on Indian market; negative on all PSU banks except SBI
"Most banking stocks, both from the PSU and private sectors, are fairly valued at current levels, and do not leave much on the table for investors in the near term," Tanushree Banerjee, Co-Head Research at Equitymaster, told CNBCTV18.com. However, she sees limited downside risk in valuations for banks with low NPAs.
"Private banks, especially those with lower levels of bad loans, are better prepared to take advantage of the possible surge in retail lending with their technology-backed products... Banks that are able invest in technology to compete with their fintech counterparts will be able to create long-term wealth," she said.
Banerjee believes PSU bank stocks' recent outperformance may end once there are signs that NPAs are surging again.
ALSO READ: Why Madhusudan Kela is bullish on PSU banks
Motilal Oswal AMC Head Equities-PMS Manish Sonthalia is among the optimists. The veteran fund manager believes the highest degree of comfort is in the largecap banking space, which has a "cushion on the net interest income (NII) growth front".
"Credit growth is likely to pick up in the second half as opposed to the previous second half (YoY). There is positive leverage. I don’t think the slippages, which were a concern on the retail front, are likely to be back significantly in the second quarter... Private sector banks appear to be very reasonably priced in terms of valuations," he said in an interview to CNBC-TV18.
ALSO READ: Private banks very reasonably priced, scope for outperformance in largecap lenders, says Motilal Oswal AMC's Manish Sonthalia
Sonthalia sees room for further outperformance in largecap banking counters, but is "not so bullish" on midcap stocks from the pack. He thinks private banks are "very reasonably priced".
ALSO READ: JPMorgan positive on Indian PSU banks, says India payments market in client acquisition phase
From technical corner
Canara Bank, Bank of Baroda and SBI are among Deen Dayal Investments Founder Manish Hathiramani's top picks among PSU banking scrips.
"After crossing the numeric value of 2,000, the PSU Bank index has flared up to the 2,500 mark. I am of the opinion that this rally is here to stay and from a technical perspective, it can scale higher to 3,000 which should be the next resistance zone," he told CNBCTV18.com.
The PSU Bank index -- which tracks stocks of 12 lenders including SBI, Bank of Baroda and Punjab National Bank -- is currently near the 2,500 mark, up 96 percent in the past one year.
(Edited by : Aditi Gautam)
Check out our in-depth Market Coverage, Business News & get real-time Stock Market Updates on CNBC-TV18. Also, Watch our channels CNBC-TV18, CNBC Awaaz and CNBC Bajar Live on-the-go!