Roundup 2019: The best year global financial markets have ever had?

Updated : December 25, 2019 07:28:49 IST
Wall Street and MSCI's near 50-country world index have both stormed to record highs after 30 percent and 24 percent leaps.
Riskier high-yield debt, corporate bonds and local currency emerging market bonds and have all brought in between 11-14 percent.
Tech has remained top more broadly. Apple may just have lost its crown as world's most valuable firm to Saudi Aramco but it can console itself with its 77 percent leap this year. For all the angst about trade wars, geopolitics and a sputtering and overly indebted global economy, 2019 might just be the best year investors have ever had. The numbers are staggering. Global stocks have piled on more than $10 trillion, bonds have been on fire, oil has surged almost 25 percent, former crisis spots Greece and Ukraine have top-performed, and even gold has sparkled.

Wall Street and MSCI's near 50-country world index have both stormed to record highs after 30 percent and 24 percent leaps. Europe, Japan, China and Brazil are all up at least 20 percent in dollar terms too. Not exactly shoddy.

A mirror image of 2018, when almost everything fell? Perhaps. But there have been a couple of important drivers.

One was China showing it was serious about stimulus for its $14 trillion economy. The other was the screeching change of direction by the world's top central banks, led by the Federal Reserve, which cut US interest rates for the first time since the financial crisis more than a decade earlier. 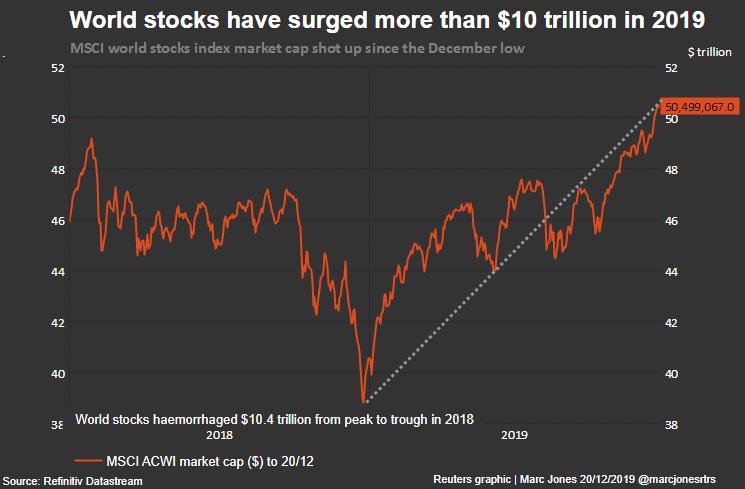 "Whereas a year ago the Fed was raising rates and earnings were rolling over, this year you have felt the Fed has been on your side," said James Clunie, who manages asset firm Jupiter's Absolute Return Fund.

"They are willing to do QE4 at a stock market (record) high, which is extraordinary," he added, referring to Fed efforts to bring down a spike in money market rates that some suggest could presage a fourth round of quantitative easing asset purchases.

That Fed shift and the worldwide blizzard of rate cuts that have come since have fired bond markets up like a rocket.

US Treasuries, the world's benchmark government IOU, have made a whopping 9.4 percent after yields plunged as much as 120 basis points. That followed a near 40 basis point fall the last quarter of 2018, after five quarters in which they had consistently risen. 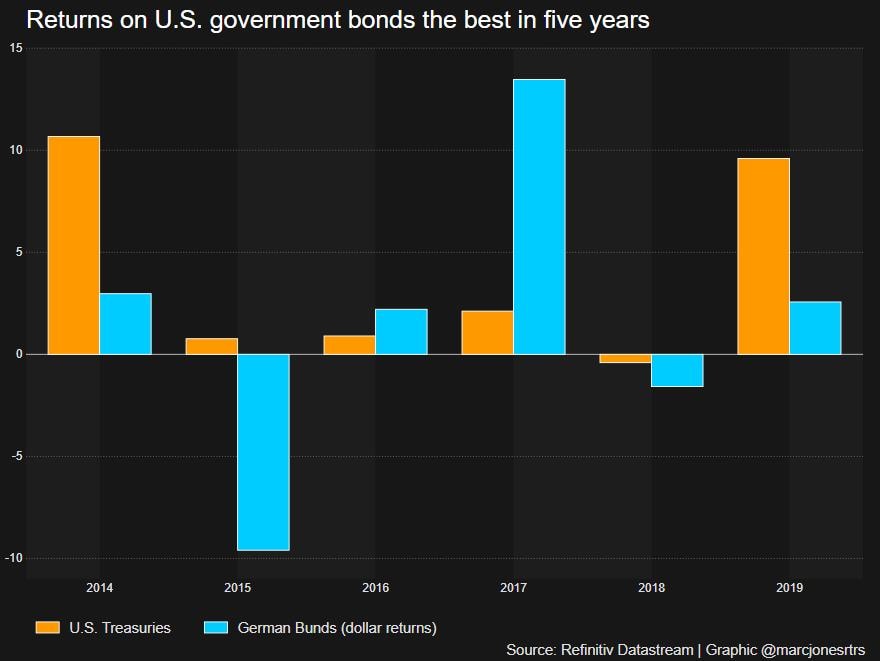 German Bunds -- Europe's safest asset -- have had their best year in five years, making roughly 5.5 percent in euro terms as the European Central Bank has reversed course too. The yield on 10-year debt dropped below zero percent for the first time since 2016 in March and dived as deep as -0.74 percent in September.

In commodities, oil has raced up almost 25 percent following its best first quarter since 2009. That, plus key dividend rule changes, has made Russia's stock market the best in the world with a 40 percent rise and also made the rouble a top three currency.

Metals have had a more mixed time. Copper is only 4 percent higher after buckling badly when trade tensions flared in the middle of the year, and aluminium is down 2 percent. But palladium, used in car and truck catalytic converters, has boomed 55 percent, while gold has had its best year since 2010 with a 15 percent jump.

A statistic likely to make most jaws drop is that Greek banks -- remember all that euro debt crisis and capital controls stuff a few years back? -- have been some of the world's best-performing stocks this year.

But even those gains look skimpy in comparison to Californian video streaming darling Roko, whose shares have risen 440 percent this year.

Tech has remained top more broadly. Apple may just have lost its crown as world's most valuable firm to Saudi Aramco but it can console itself with its 77 percent leap this year.

Cryptoassets have been typically wild. Bitcoin was up over up 260 percent in June but it has been hauled back to around 85 percent. Riskier high-yield debt, corporate bonds and local currency emerging market bonds and have all brought in between 11-14 percent while Ukraine's dollar bonds and Greece's euro bonds have piled on over 30 percent.

"It has been a relentless rally across the board over the last couple of months and it is possible that it continues into next year." 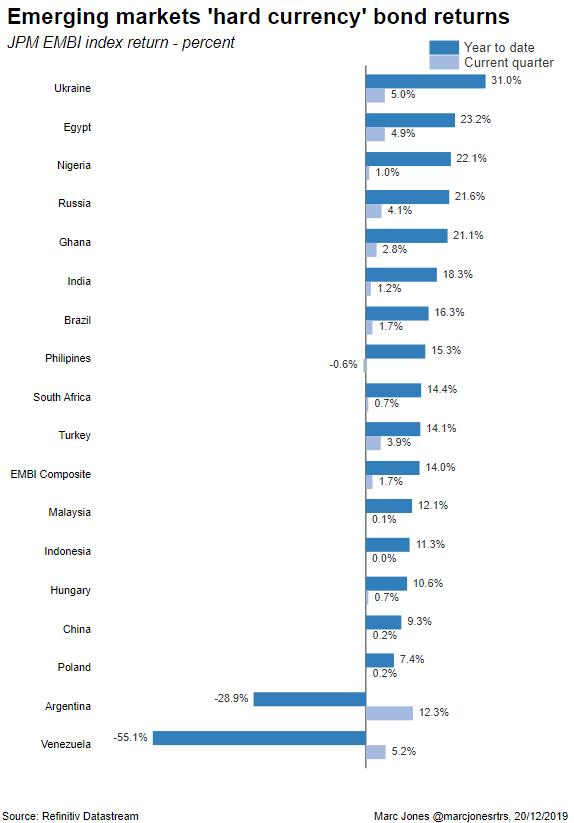 Despite almost daily Brexit chaos, the loss of another prime minister and a snap election, UK gilts have returned 4.5 percent and a near 6 percent rise could land sterling its best quarter since 2009.

In contrast, the Fed's pirouette and easing of trade tensions means the dollar index is about to experience its worst quarter in 1-1/2 years. It is still clinging to a 1.5 percent gain for the year, though, meaning it will be the euro's fifth red year in six.

As usual, the big swings have been in emerging markets. Argentina's peso and Turkey's lira, 2018's punchbags, have taken another beating. Argentina's woes have worsened such that it is restructuring its debt again while Turkey's worries have not really gone away.

At the other end of the spectrum, a new president and a new reform agenda have seen Ukraine's hryvnia rocket 19 percent. Russia's rouble is up 11 percent and Egypt's pound is sandwiched inbetween with a 11.7 percent gain.