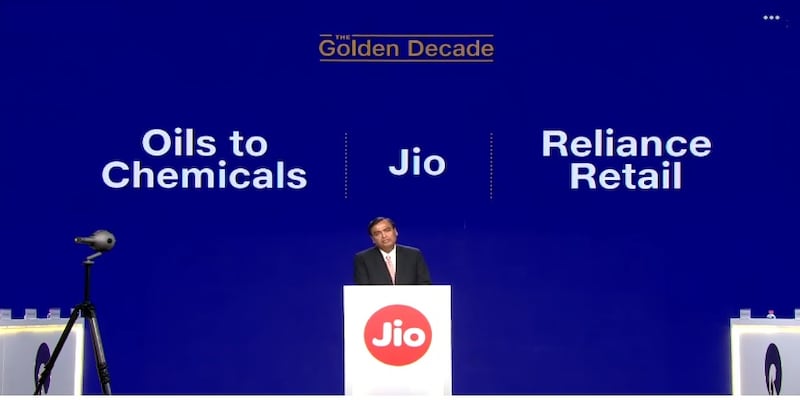 Shares of Reliance Industries (RIL) rallied nearly 10 percent, the biggest one day gain in 10 years, on Tuesday following big bang announcements by chairman Mukesh Ambani at its 42nd annual general meeting (AGM) held on August 12. RIL's stock price gained as much as 12.1 percent to Rs 1,302.50 per share on BSE in intra-day deals. The stock ended 9.7 percent higher at Rs 1,274.60, while the benchmark Sensex declined 1.7 percent or 635 points to 36,947.

RIL shares have declined 3.9 percent in last one year and traded 7.5 percent lower so far this year.
Deal with Saudi Aramco, commitment to become a net zero debt company, plans of listing Jio and Reliance Retail and rapid growth in the consumer business were some of the major announcements at the AGM yesterday.
Most brokerages turned bullish on the stock post the announcements and expect a re-rating in the stock soon. Morgan Stanley upgraded the stock to 'overweight' from 'equal-weight', saying that faster asset monetisation could surprise the street.
Meanwhile, CLSA retained a 'buy' call on the stock, saying that the company has set the stage for the next leap for its tech and consumer businesses. Macquarie also upgraded the stock to 'outperform'. It sees a 19 percent upside following the stream of bullish newsflow at the AGM.
Reliance Industries and major oil producer Saudi Aramco have signed a nonbinding letter of intent under which Saudi Aramco will buy a 20 percent stake in RIL's oil-to-chemical business at an enterprise value of $75 billion.
At the end of the financial year 2018-19, RIL had net debt of Rs 1.54 lakh on its books. The company has a concrete deadline of 18 months for reducing the net debt to zero, Ambani announced at the AGM.
Ambani also announced that RIL has plans to take both Jio and Reliance Retail public over the next five years. "Reliance Jio and Reliance Retail, if listed separately, would be among the top ten companies in the country," Ambani said at the AGM.
In the retail business, Ambani said that Reliance Retail had cemented its position as India’s number one retailer with a turnover of Rs 1.3 lakh crore last year.
Also, track all live market action on CNBC-TV18 Market Blog
Disclosure: Network18, the parent company of CNBCTV18.com, is controlled by Independent Media Trust, of which Reliance Industries is the sole beneficiary.
Check out our in-depth Market Coverage, Business News & get real-time Stock Market Updates on CNBC-TV18. Also, Watch our channels CNBC-TV18, CNBC Awaaz and CNBC Bajar Live on-the-go!