Reliance Industries’ market cap has crossed the Rs 10 lakh crore milestone on Thursday. The Mukesh Ambani-led oil-to-telecom conglomerate has become the largest company on Indian bourses and also jumped to the sixth spot as the largest oil and gas company in the world. Moreover, if the target average of Rs 1,725 per share by brokerages such as Credit Suisse and others is achieved, RIL could soon rank as the fifth largest oil and gas company globally.

At present, Reliance Industries ranks as the sixth-largest oil and gas company in the world, behind Petro China, which has a market cap of $147.4 billion. In dollar terms, RIL's current market cap is estimated at $140 billion, which can swell to $152 billion at brokerages’ revised target price. At target value, RIL will be only behind Saudi Aramco ($1700 billion), ExxonMobil ($291.2 billion), Royal Dutch Shell ($229.4 billion) and Chevron ($223.5 billion). At present, Reliance Industries ranks as the sixth-largest oil and gas company in the world, behind Petro China, which has a market cap of $147.4 billion.

Reliance Industries and Saudi Aramco signed a nonbinding letter of intent in August this year under which Saudi Aramco will buy a 20 percent stake in RIL's oil-to-chemical business at an enterprise value of $75 billion.

The deal will help RIL pare its debt, that has increased significantly in recent years, a concern flagged by Credit Suisse in a report. The brokerage had said that RIL's financing liabilities had increased from $19 billion in FY2015 to $65 billion in FY 2019, while its net debt rising from roughly $3 billion to over $12 billion during the period. The additional debt at the consolidated balance sheet rose from $9.4 billion to $20.6 billion, it said. 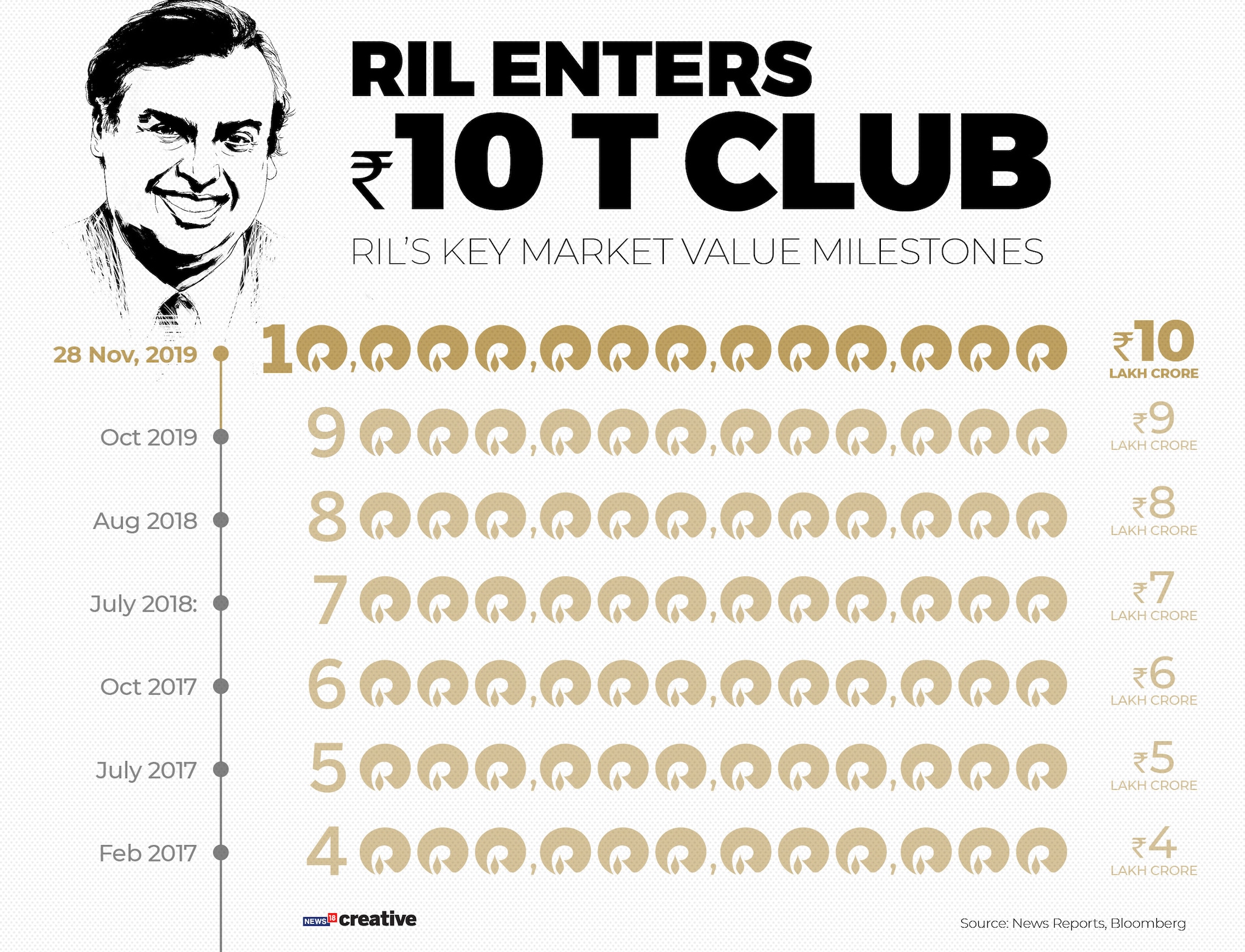 In the last 42 years, Reliance Industries' has given strong returns to its investors. For instance, the value of an investment of Rs 10,000 made in Reliance Industries' initial public offer (IPO) in 1977 would have turned into Rs 2,10,000,000 or over Rs 2 crore. In percentage terms, the stock has returned 2,09,900 percent.

Reliance Industries versus the rest

RIL's Rs 10 lakh crore market cap equals the combined market cap of as many as 23 Nifty companies, including consumer major Britannia and auto players like Hero MotoCorp and Tata Motors.

In relation to small cap companies, RIL's market cap is now equal to the market cap of as many as 250 smallcap players. In m-cap, IT giant TCS comes at a distant second with a market value of Rs 7.71 lakh crore.

In m-cap, IT giant TCS comes at a distant second with a market value of Rs 7.71 lakh crore. Interestingly, HDFC Bank has joined the top three recently, with its m-cap crossing the landmark figure of Rs 6.99 lakh crore.