Oil-telecom-to-retail major Reliance Industries made history on November 28 by crossing and closing above Rs 10 lakh crore (trillion) market capitalisation It is the first listed Indian entity to reach this milestone. In fact, it created a big gap of more than Rs 2 lakh crore between itself and TCS, the second highest company in terms of market cap.

As a result, Chairman and Managing Director Mukesh Ambani remained the country's richest man, with a net worth of $60.7 billion, and Asia's 13th richest person, which is equivalent to the combined GDP of countries like Zimbabwe ($19.4 billion), Mauritius ($14 billion) and Iceland ($26.6 billion). Here is the journey of RIL's market cap since 2005: 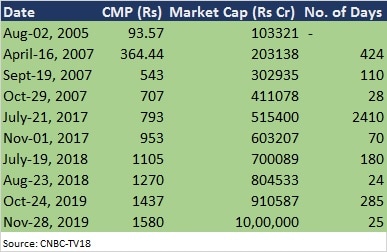 Thanks to telecom (Reliance Jio Infocomm) and retail (Reliance Retail) or mainly consumer businesses which made investors, as well as analysts, confident about the company's growth and brought the stock back from long consolidation phase to growth phase.

In fact, after hovering in the range of Rs 350-550 levels since 2009, the stock gathered steam in 2016 when it launched Jio and, since then, it turned a multibagger for investors. It rallied 220 percent in the last three years against the Nifty50's 50 percent rally in the same period.

Here is the every year stock price return journey of Reliance Industries since December 1999: In terms of example, if one invested Rs 10,000 in Reliance during IPO in 1977, those shares would have currently valued at Rs 2.1 crore.

Moreover, the consistent growth in consumer businesses and the recent asset monetisation plan to reduce debt significantly along with expected tariff hike prompted brokerages to turn more bullish on the stock and raised price targets.

Bank of America Merrill Lynch also said the company was expected to touch Rs 14 lakh crore in market cap in the coming months.

"We will put two important factors that should be seen as a catalyst for this share. Firstly, the Reliance Jio disruption. This company has seen a stellar growth with a market share of more than 30 percent and is on the rise. The second is the stake sale to Aramco has further made its valuation going forward attractive since their aim to achieve the debt-free balance sheet is likely to be seen in FY20-21," Mustafa Nadeem, CEO, Epic Research, told Moneycontrol.

In fact, Reliance is the stock that is carrying much of its weight to lift the benchmark indices up.

"Hence, it is more of a value play where everyone from retail to portfolio managers wants this to be in the portfolio since it is also outperforming from the last few months," Nadeem said.

He believes the stock can continue to go north.

"There was a recent consolidation and that was fairly utilized as a minor dip. These dips may be seen in the future and any correction in stock to 3-4 percent should rather be seen as an opportunity. We believe investors or traders should also put risk-reward into play while buying any stock and stock like reliance should be added but on any minor dips towards lower levels of Rs 1,440-1,460," he said.

Sharekhan said RIL had been its high-conviction investment idea for the past one year. The brokerage anticipated the re-rating in the counter, given its expectation of strong earnings growth in retail business and strong profitability in the digital services business.

HSBC also retained its buy call on the stock with a target price at Rs 1,700 per share as it believes Jio and Retail are set to continue to drive upside. "RIL's consumer businesses are driving the upside and valuation of RIL does not appear expensive," the brokerage said.

In October, RIL approved the formation of a wholly-owned subsidiary (WOS) for Digital Platform initiatives and said Reliance Jio Infocomm (Jio) would become virtually net debt free company by FY20-end, with the exception of spectrum-related liabilities.

Jio has already become the largest operator in India and is still signing up more than 10 million new customers each month. On November 19, it said it would raise the tariffs and data charges in the next few weeks.

"Jio's tariff can bring annual cash flow of more than $1.5 billion. Hence, we increased FY20/21/22 EPS estimates by 15/12/20 percent. The Jio price increase is earlier-than-expected," said Credit Suisse which was the only brokerage (as per our list) had maintained neutral rating with a target price at Rs 1,400.

The two consumer businesses now collectively contribute nearly 32 percent to its consolidated EBITDA, up from two percent five years ago. The management is targeting their share to be 50 percent in the next few years.

On the strength of RIL's existing and new growth engines, the management is confident of growing this by 15 percent annually over the next five years.

RIL and Saudi Aramco have agreed to a non-binding letter of intent (LOI), wherein the latter may acquire a 20 percent stake in the ‘oil-to-chemicals’ division at an enterprise value of $75 billion. In fact, the Saudi Aramco also mentioned about this investment in its IPO.

RIL have received strong interest from strategic and financial investors in their consumer businesses, Jio and Reliance Retail. The company will induct leading global partners in these businesses in the next few quarters and move towards listing of both these companies within the next five years, which will result in significant value unlocking.