For the sixth consecutive year, the oil-to-telecom-to-retail conglomerate has outperformed the benchmark Nifty50 index.

Reliance Industries is the only Indian company in history to have raised about Rs 2.12 lakh crore by selling a 33 percent stake in Jio Platforms and a rights issue, which has made it virtually a net-debt free company. For the sixth consecutive year, the oil-to-telecom-to-retail conglomerate has outperformed the benchmark Nifty50 index.

Global brokerage Nomura in its report said that while the valuations of the RIL stock are getting richer, it feels that the outperformance may sustain and hence, raised the target price on the stock to Rs 2,200 from an earlier TP of Rs 1,900 per share.
"RIL is now outperforming the benchmark Nifty for the sixth year. From the lows in March, RIL is up 110 percent (v/s Nifty +41 percent). From end-2014, when this cycle began, RIL is up 4.1x (v/s the Nifty’s rise of 30 percent)," said the global brokerage.
Over the last three years, RIL’s stock performance has been outstanding: in
2017/18/19, the stock was up 70 /22/38 percent, v/s the Nifty's rise of 19/3/12 percent, added the report. 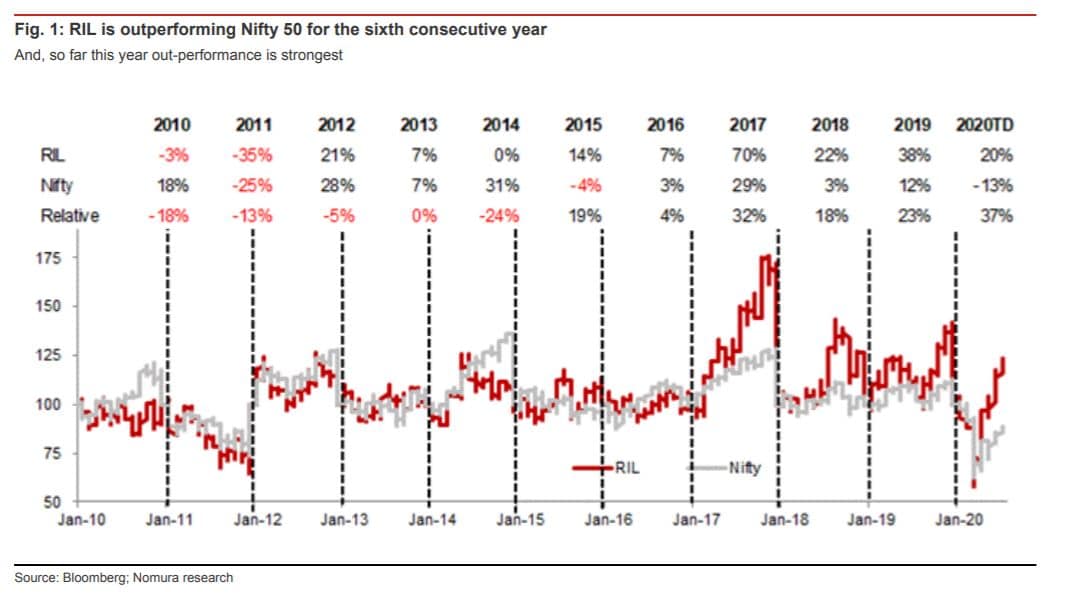 Source: Nomura Report
Despite a subdued FY21, expect 29 percent CAGR in consolidated earnings over FY20-23F, said the brokerage.
Also Read:
A brief history of the success story on Reliance Industries
On the Saudi Aramco deal front, Nomura observed that while the proposed transaction to sell 20 percent stake in oil to chemicals (O2C) is delayed, RIL seems committed to a partnership with the Saudi Arabian oil giant.
The brokerage said that to facilitate the Saudi Aramco deal, RIL is planning to spin off the O2C into a separate subsidiary. It will further look to induct global partners/investors in its retail segment in the next few quarters, before eventually listing Retail/Jio through an IPO.