The first half of 2019 has been very volatile for the markets. The Nifty50 index swung between 10,600- levels to its record high of 12,103 in the last 6 months. Volatility levels have been higher in mid and small-cap indices, as market sentiment remains exposed to the slowdown in the economy, concerns around liquidity woes for NBFCs and a slowdown in consumption on the domestic front.

After trading around 10,600-11,00 levels since January 2019, the Nifty rose in March and the early part of April 2019, led by strong FII flows amidst the general elections. Shortly after the election verdict turned out to be better than market expectations and a BJP majority government took office, the Nifty crossed the 12,000-mark in June 2019.

However, according to a report by Motilal Oswal Financial Services (MOSL), Nifty crossed 12,000-mark, thanks to the performance of only 15 stocks in the index. Meanwhile, the remaining 35 scrips are showcasing the Nifty to be below 9,000, it said.

"The divergence between these two segments of the market has become quite stark in terms of both performance and valuations – one trading at a substantial premium and the other at a huge discount to their long-period average valuations," the report added.

A segment of Nifty trading at 30-50 percent discount to their long-period average (LPA) valuation including Eicher Motors, M&M, Coal India and ONGC, MOSL reported. On the contrary, stocks like Bajaj Finance, Reliance, Titan, Asian Paints, TCS, and HUL are trading at a substantial premium to their respective 5/10-year average Price-to-earnings (P/E) or price-to-book (P/B) multiples, it further said. 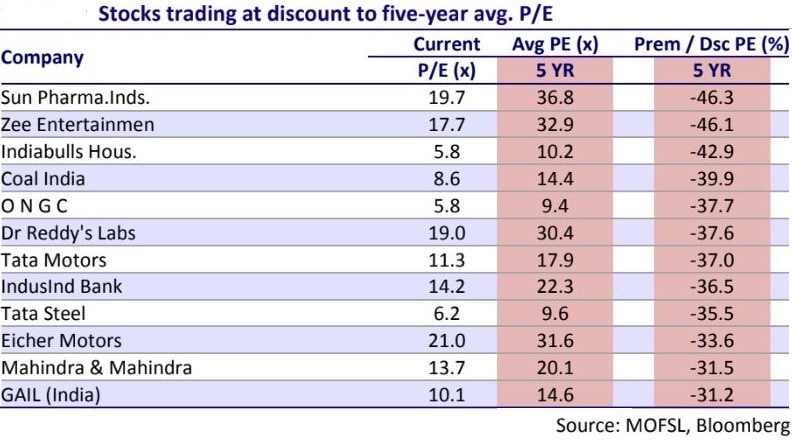 "This polarisation on performance and valuations clearly underscores two things. Firstly, investors taking continued refuge in the quality/earnings predictability theme in an environment of economic slowdown and secondly, there is a lack of pick-up in the broader market’s earnings growth. Even the expected FY20 earnings revival (with 26 percent growth) for the Nifty is predicated on the banking sector’s normalization of credit costs. In fact, BFSI is expected to account for 70 percent of incremental earnings for the Nifty in FY20," MOSL observed.

Going forward, the brokerage believes that the valuation headroom for the Nifty is limited in an environment of continued earnings downside risks and the progress of monsoon, the Budget, any potential government measures on consumption/liquidity and 1QFY20 earnings performance are the key near-term triggers for the markets.

It also added that midcaps now trade at a 14 percent discount to large-caps and offer relatively good risk-reward, however, market sentiment and a potential liquidity improvement in the economy are key pre-requisites for mid-caps to perform.