Updated : June 06, 2019 02:56 PM IST
The Nifty Bank has risen 5 percent since the April 4 monetary policy as compared to a 3 percent rise in Nifty.
However, between the February and April policies, Nifty Bank rose over 8 percent.
Kotak Bank, Federal Bank, SBI, HDFC Bank, Axis Bank, and ICICI Bank gained between 7-16.3 percent.

The Reserve Bank of India (RBI) cut its policy interest rate by 25 basis points to 5.75 percent on Thursday, for the third time in a row and shifted its policy stance to “accommodative” from “neutral” to boost a slowing economy. All economists on the CNBC-TV18 panel unanimously voted for a 25 basis points rate cut and four of the five members expect the RBI to keep a 'neutral' stance.

The Nifty Bank has advanced 5 percent since April 4, till date, as compared to a 3 percent rise in Nifty. 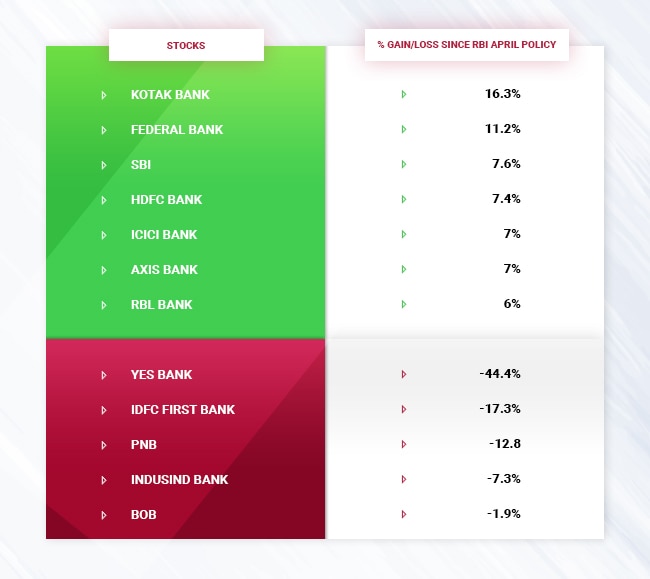 YES Bank fell the most, down 44 percent on prolonged exposure to stressed assets like DHFL. It reported a record loss of Rs 1,506 crore in the March quarter due to exposure to aviation, infra and real estate turning bad.

Meanwhile, IndusInd Bank fell 7 percent after it reported a decline of over 62 percent in March quarter net profit at Rs 360.10 crore. The bank informed bourses that it has an exposure of Rs 3,004 crore to the IL&FS Group, all of which have been classified as NPL in Q4FY19.

However, between the February and April policies, Nifty Bank rose over 8 percent and all constituents were positive during that period.

The Nifty Bank index was also in the red during the last two policy days. On April 4, it slipped 0.6 percent, while on February 7, it was flat (down 0.06 percent). The index was trading 0.6 percent lower in trade today.