Motilal Oswal maintains ‘Neutral’ rating on Nestle India at a price target of Rs 11,800 per share.

The brokerage maintained a ‘Neutral’ rating on Nestle India at a price target of Rs 11,800 per share due to its limited room for upside over the next year.
At 12:00 PM, Nestle India was trading marginally lower by 0.68 percent to Rs 10,649.90 per share. The focus of Nestle India is advertisement spend right now, which has increased 44.2 percent to Rs 7.3 bn in CY18. On a percentage to domestic sales basis, the increase was by 160bps YoY to 6.9%, the highest level since CY02 levels, said Oswal. 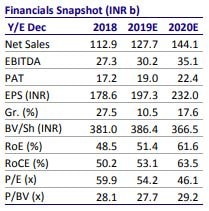 The report further added that the cash generation has been strong due to healthy improvements in net working capital (NWC) days and improved fixed asset turns. Operating cash flow/ Free Cash flow has grown 23.2%/25.8% CAGR respectively over this period. NWC days are back to negative levels for the first time since CY10, led by both lower inventory levels and higher creditors.
Currently, Nestle’s net cash and cash equivalents have increased very sharply over the past four years from Rs 12.7bn to Rs 42.7bn.
Therefore, Motilal Oswal believes that Nestle is getting consistently better and valuations at 46.2xCY20 leave limited room for upside over the next year.
Check out our in-depth Market Coverage, Business News & get real-time Stock Market Updates on CNBC-TV18. Also, Watch our channels CNBC-TV18, CNBC Awaaz and CNBC Bajar Live on-the-go!