This article is more than 3 month old.

Sensex and Nifty50 turned negative on the last day of the holiday-shortened week tracking a turmoil in global markets as investors stared at the prospect of an earlier-than-expected end to the Fed's loose monetary policy.

Dalal Street ended the holiday-shortened week on a lower note on Friday following two straight weekly gains, as weakness in the metal and PSU banking stocks outweighed gains in the FMCG and IT baskets. Both indices turned negative only on the last day of the trading week tracking a turmoil in global markets as investors stared at the prospect of an earlier-than-expected end to the US central bank's ultra loose monetary policy.
For the week, the S&P BSE Sensex index lost 107.97 points or 0.19 percent and the 50-scrip gauge climbed 78.60 points or 0.48 percent. The 30-strong pack ended 789.25 points or 1.41 percent off an all-time high touched on Wednesday.
Broader indices underperformed the headline gauges, with Nifty Midcap 100 and Smallcap 100 plummeting 1.72 percent and 3.42 percent respectively.
Minutes of the Federal Open Market Committee's last scheduled policy reviewed suggested the US central bank's officials largely expect to trim their monthly bond buys later this year. The Fed is currently purchasing $120 billion in Treasury and mortgage bonds each month to support the world's largest economy, as part of the policy it had introduced in 2020 to battle the economic fallout from the pandemic.
All eyes are now on a meeting of US central bankers at the annual Jackson Hole symposium in Wyoming, which runs from August 26 to 28, for more clues on the US monetary policy going forward.
Besides, concerns over increasing cases of the Delta variant of Covid-19 and and China's regulatory crackdowns hurt investors' sentiment.
Meanwhile, Jefferies Head of Global Equity Strategy Christopher Wood raised India's weightage in the brokerage's model portfolio by two percentage points.
Among NSE's sectoral gauges, the Nifty Metal, Media, PSU Bank and Realty indices were the worst hit, suffering weekly losses of 7.99 percent, 5.96 percent, 5.85 percent and 5.36 percent respectively. The FMCG and IT barometers, on the other hand, gained 4.76 percent and 2.06 percent respectively.
The Nifty Bank index lost 1,135.50 points (3.14 percent) lower during the week. Financial services shares have the maximum weightage of 37 percent among sectors in the Nifty50 benchmark. 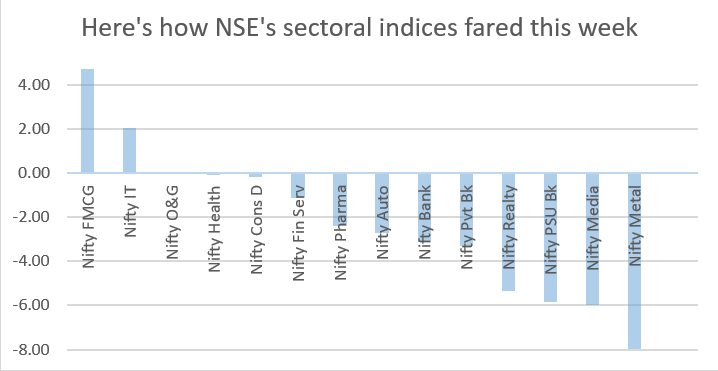 Much of the metal pack's weekly damage came on Friday following a sharp plunge in iron ore futures across the world.

"Markets across the globe succumbed to profit booking during the week... The domestic market followed its global peers and witnessed selling in all major sectors. Market focus has shifted from broader markets to largecap stocks, especially of defensive sectors," said Vinod Nair, Head of Research at Geojit Financial Services.
Among the 30 laggards in the Nifty50 universe for the week, JSW Steel, Hindalco, Tata Motors, UPL, Coal India, IndusInd Bank, ONGC, SBI and Kotak Mahindra Bank -- tumbling between 4.71 percent and 8.59 percent -- were the worst hit.
Nifty losers
Also read: IPOs prove unlucky for HNIs in August | Is the euphoria around IPOs fading?
Nifty gainers
In broader markets, Dhani Services, SAIL, Natco Pharma, JSPL, Ujjivan Small Finance Bank, Kaveri Seed and IDFC were the top weekly losers. On the flipside, Adani Gas, Fortis, Midtree, Tata Elxsi, Vakrangee, Linder and Kajaria Ceramic were among the gainers.
The road ahead
"In the absence of key domestic economic data points, the market is expected to continue its focus on global events in order to gain momentum. The global rise in Covid cases is also a cause for worry, keeping the volatility high," Nair added.
(Edited by : Abhishek Jha)
Tags
next story