Stock Market Highlights: The Indian market recovered from day's low to end higher on Tuesday despite volatility arising from escalation in border tensions between India and China. The gains were led by HDFC twins and ICICI Bank, which surged to end 4 percent today. Tata Motors remained the Nifty50 top loser of the day, down nearly 5 percent. FMCG, pharma, PSU bank and realty indexes closed in the red, meanwhile, financials and private bank sector ended the session on a higher note, up over 2 percent.

1. Market closes off lows amid volatility, Nifty above 9,900

8. Axis Bank falls over 2% after its retail banking head quits

9. Telecom stocks close with cuts ahead of AGR hearing at SC tomorrow

The Indian equity benchmark indices witnessed a volatile trade today due to escalating tensions between India and China.

About 1,191 shares have advanced, 1,350 shares declined, and 150 shares are unchanged, reported Moneycontrol.

These 2 Nifty50 stocks doubled investor wealth in 3 years. Did you miss the rally?

Two stocks from the Nifty50 index have proven multibaggers despite domestic and global hurdles, and have doubled investor wealth in the last three years.

Nestle and Reliance Industries (RIL) have gained over 100 percent each between June 2017 and June 2020. In comparison, Nifty has risen only 3 percent in the same period.

The benchmark index crossed the 12,000-mark and has fallen below the 10,000-mark in the past three years, but the fortunes of Nestle and RIL have only went up. Click here to read more

Trending Stock: Shilpa Medicare will make an acquisition of two companies, said the company's filing to the exchanges. The first one will involve acquiring a 100% stake in FTF Pharma for a total consideration of Rs 75 crore, as per the company's press release. It will also acquire 40% stake in Auxilla Pharmaceuticals for Rs 6 crore. Despite the announcement, the company's shares fell as much as 8.77 percent to Rs 514.50 per share on the NSE.

Rupee Update: The Indian currency ended with losses on Tuesday after tensions between India and China at the Line of Actual Control (LAC) escalated. The Indian rupee ended at 76.21 as against US dollar as compared to Monday's close of 76.03.

Stock Update: MAS Financial's shares fell as much as nearly 2 percent to Rs 661 after the company approved the borrowing of funds of Rs 500 crore. In its exchange filing, the company said that the fund raising will be done through secured, rated, listed, redeemable, non-convertible debentures (NCDs). The NCDs will be issued in one or more tranches via private placement basis, added the regulatory filing.

Investors on Tuesday will be focused on central bank announcements, particularly after the Fed announced Monday more measures to support the market.

The Fed said it would buy individual corporate bonds, marking a broader approach to corporate bond buying. Previously indicating it would eventually buy bonds on the primary market, Monday’s announcement by the U.S. central bank marked an expansion of that into the secondary market.

Buzzing Stock: Rakesh Jhunjhunwala increases his stake in Jubilant LifeSciences to 5.2%. Jhunjhunwala's wife bought an additional stake of 0.4 percent on June 15, according to the shareholding pattern. The stock gained as much as 3.26 percent to hit 52-week high of Rs 695.90 per share on the NSE.

Bayer CropScience's shares hit 52-week high and surged over 4 percent on Tuesday after a tie-up with ITC to market its crop protection products to farmers. The Bayer CropScience stock gained as much as 4.13 percent to Rs 5,717.95 per share on the NSE, while ITC's shares traded as much as 2 percent higher, quoting at Rs 190.95 apiece.

The partnership with ITC has commenced as a pilot project in Mysore, Karnataka, and will gradually be expanded to other geographies across India, Bayer CropScience said in a statement.

Despite many rounds of relaxations in movement, India's shipping industry is facing a crisis

The large-scale exodus of migrant laborers has left cargo congesting ports and container freight stations, even as volumes of cargo processed at major ports including JNPT outside Mumbai in Maharashtra, and in Gujarat was seen to have dropped by 70 percent-80 percent.

Export-import traders caution the situation is likely to continue even until August if the government does not intervene to mobilise more workers. According to EXIM traders CNBC-TV18 spoke to, there is a severe shortage of labour, and drivers at ports, which has stalled movement of cargo from ports to container freight stations (CFSes), as only about 10 percent of the required strength of drivers is currently available. Read more 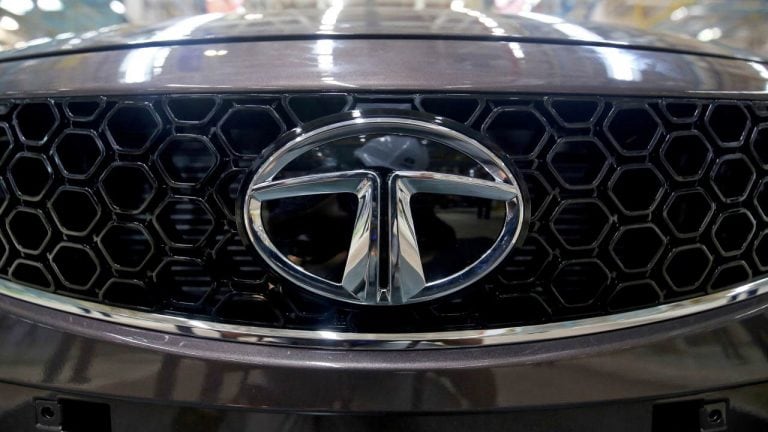 Shares of Tata Motors declined over 4 percent on Tuesday after the company reported a consolidated loss of Rs 9,894.25 crore in the fourth quarter of fiscal 2020 as against a consolidated profit of Rs…

Ashoka Buildcon's share price gained as much as 9 percent to Rs 58 on the NSE after the company reported consolidated net profit of Rs 134.55 crore for the quarter ended March. The company had posted a net loss of Rs 10.23 crore in the same period last year.

The total income in the March quarter fell to Rs 1,609 crore as against Rs 1,624 crore in the corresponding period of the previous year.

The company's total order book as on March 31, 2020 stood at Rs 8,379 crore. In its regulatory filing, the company said, "It expects revenue and profitability to be impacted in Q1FY21 due to the COVID-19 outbreak."

Almost all the small and medium enterprise (SME) customers of CSB Bank are looking to opt for the moratorium on their loans, the banks Managing Director and CEO, CVR Rajendran said in an interview with CNBC-TV18.

This accounts for roughly a fourth of the bank’s loan book, Rajendran said.

On non-performing assets (NPA), he said the situation at present was much better than what it was during the previous years.

He said that nine out of 10 corporates were servicing their loans on time. Watch Rajendran's exclusive interview to CNBC-TV18 here

Gas exchange has much more potential to scale up. Once there are huge amount of buyers, sellers will come to the exchange, says Rajiv Srivastava, MD & CEO of Indian Energy Exchange (IEX) #OnCNBCTV18 pic.twitter.com/6hoSILu21K

Shares of Lakshmi Vilas Bank (LVB) hit an upper circuit of 5 percent in early trade on Tuesday after CNBC-TV18 reported that the lender may be able to raise Rs 1,200- Rs 1,500 crore of investment from AION Capital-backed NBFC Clix Capital, if the proposed transaction goes through. The shares were locked at Rs 16.06, up 5 percent as against Monday's close of Rs 15.30 on the BSE.

The private sector lender on Monday had informed exchanges that it had received a preliminary, non-binding letter of intent (LoI) from Clix Capital Services Private Limited & Clix Finance India Private Limited. The bank said this proposal is subject to completion of due diligence and will be subject to regulatory and other customary approvals. Click here to read more

The Deferasirox tablets have an estimated market size of US$ 53 million for twelve months ending March 2020 according to IQVIA.

Can Fin Homes surges over 10% on strong Q4FY20 earnings We still remain hopeful and expect the Nifty not to fall below 9,500 now. Before this, 9,750 – 9,675 can be seen as intraday supports. On the flipside, 9,925 – 10,000 remains to be a sturdy wall and if the index has to regain any strength, it needs to again enter a five-digit territory soon. At present, traders are advised not to get carried away by this global sell-off and should ideally stick to a stock centric approach. The midcap index is interestingly poised and hence if we see a reversal in major indices, the broader market is likely to outperform. 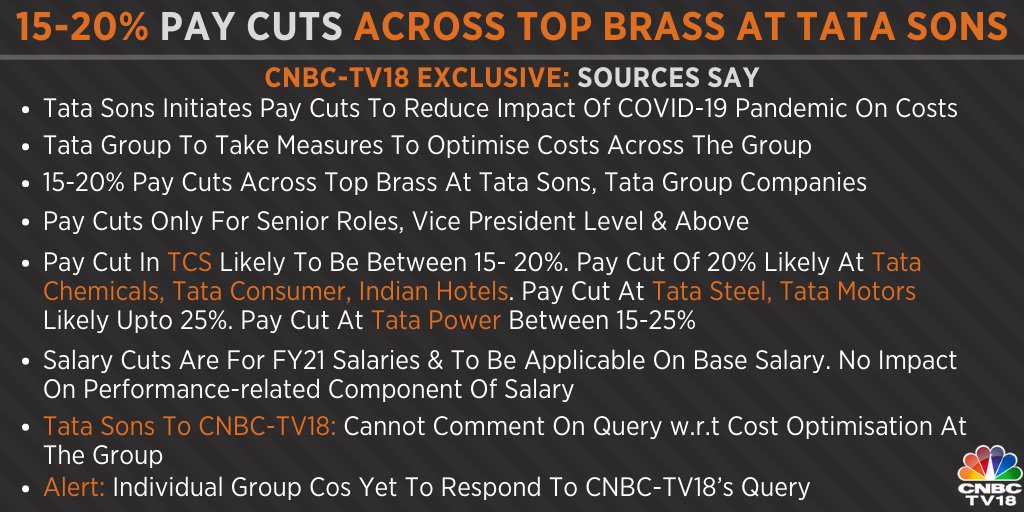 Shares of Lakshmi Vilas Bank (LVB) hit an upper circuit of 5 percent in the early trade on Tuesday after CNBC-TV18 reported that the bank may be able to get Rs 1,200- Rs 1,500 crore of investment from AION Capital-backed NBFC Clix Capital, if the proposed transaction goes through. The shares were locked at Rs 16.06, up 5 percent as against Monday's close of Rs 15.30 on the BSE. The private sector lender on Monday had informed exchanges that it had received a preliminary, non-binding letter of intent (LoI) from Clix Capital Services Private Limited & Clix Finance India Private Limited. The bank said this proposal is subject to completion of due diligence and will be subject to regulatory and other customary approvals. People aware of the matter said told CNBC-TV18 that the bank may receive Rs 1,200- Rs 1,500 crore of investment.

#CNBCTV18Market | Nifty Bank trades with a gain of more than 600 points pic.twitter.com/EN88G2bvUd